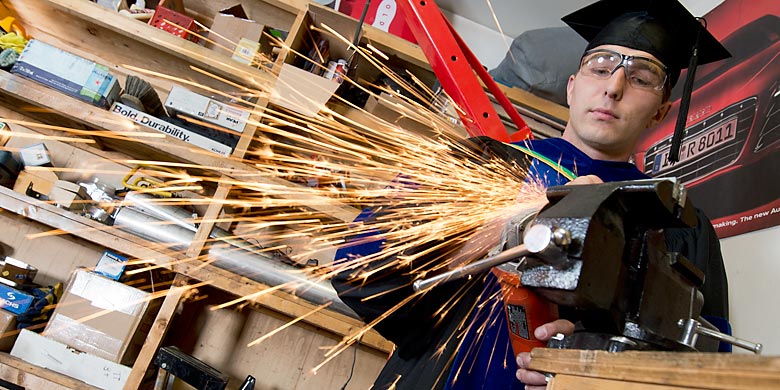 120606-robertsedlak-banner
Robert Sedlak is a jack of all trades whose sights are now set on a career as a family physician.

(Edmonton) Rob Sedlak always set his sights high after he immigrated to Canada from the Czech Republic as a young man.

The son of a Czech surgeon, Sedlak took whatever job he could find to help pay the bills as he worked on his biochemistry degree at the University of Calgary. He started off as a highrise window cleaner. Then he became a firefighter and an expert in rope rescue. Along the way he started his own business as a consultant in the industrial use of rope.

“It’s basic trigonometry—figuring out loads and angles,” Sedlak explains about his business.

Then came a letter that he had been accepted into medical school at the University of Alberta, so he moved his then-pregnant wife and daughter to Edmonton. To help cover his school expenses, Sedlak continued his rope consultancy business for a year and eventually joined the Canadian Forces as a medical officer with the Department of National Defence.

Six months before he finished medical school, his family grew with the birth of a second daughter, their third child. As if he weren’t busy enough, the day after he finished his final exams Sedlak sold a high-powered race car that he had restored in his “spare time.” In fact, his handiwork was recently featured in a major racing magazine.

In June, Sedlak will walk across the stage at Jubilee Auditorium to accept his medical degree. The 30-year-old will start his family medicine residency in Edmonton this summer.

Verna Yiu, interim dean of the Faculty of Medicine & Dentistry at the U of A, says Sedlak’s “story of perseverance and resilience should be an inspiration for all. His impressive life experiences will serve him well as a physician where it is important to be appreciative of differences and diversity,” she says.

“We in the faculty are very proud of all our graduates as they embark on a rewarding career of being a physician.”

Once Sedlak’s two-year residency is complete, he will serve four years in the military in exchange for the Department of National Defence paying his medical-school expenses and a wage. When his military service is finished, Sedlak plans to put down permanent roots and set up practice in rural Alberta. He believes small towns are a great place to raise a family.

“I think one of the biggest pros of having a background like this is being able to talk with people from all walks of life,” says Sedlak. “I think 90 per cent of my patients in rural Alberta will be blue-collar [workers]. And being able to relate to them, talk to them and put myself in their shoes—knowing what financial struggles are about, knowing what manual labour is all about—I hope it will provide me with more empathy. I think it’s always good to be well-rounded.”

Sedlak had taken one year of medical school in the Czech Republic but withdrew because his family immigrated to Canada. His kid sister is one year behind him in medical school at the U of A and his brother is working on a kinesiology degree at the University of Calgary.

“Becoming a doctor was always in the back of my mind, but I seriously started doubting I’d ever be able to do that after coming to Canada. School is costly. And I knew I’d have to get my first degree, whereas in the Czech Republic you can go into medical school right after high school,” says Sedlak.

“During my first degree I got a little bit discouraged because it seemed like everyone was trying to get into medicine and I didn’t think I stood a chance. That’s why I went to plan B, to be a firefighter, which eventually became plan A for a few years. Then I decided to give medicine a shot,” he says.

“I really feel that Canada has been a land of opportunity for me, that through a strong work ethic you really can do whatever you set your mind to. You really can achieve your dreams.”