Heading to great heights in the name of research

Embarking on a research excursion to the Himalayan mountain range is an extremely unique opportunity — some may even say it’s a once in a career lifetime chance. 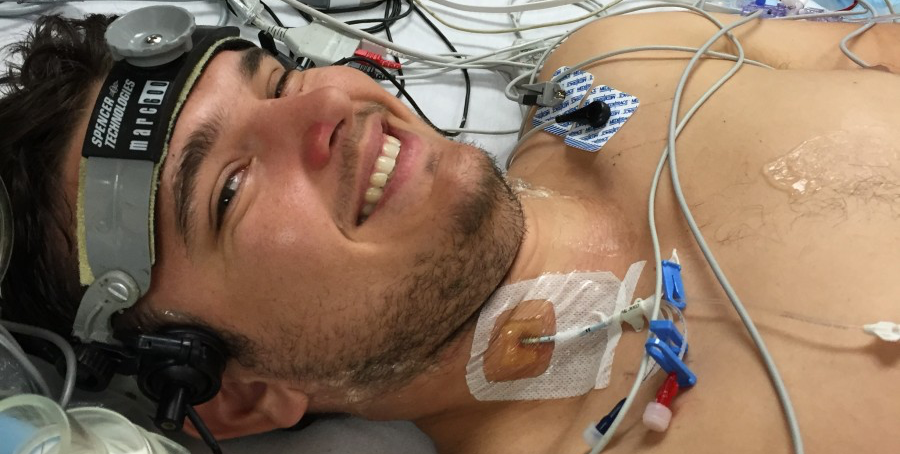 Masters student Stephen Busch hooked up and ready to undergo a study investigating the specific role of blood cells on the response to low oxygen during baseline testing, which took place in Kelowna from August 22 to September 2.

On September 26th, Faculty of Physical Education and Recreation assistant professor Dr. Craig Steinback will leave on a rare investigative journey to Kathmandu alongside colleagues from around the world as part of a massive multi-national research excursion. The team — which comprises 37 expert physiologists, clinicians and trainees from 11 different institutions in six different countries — are running a wide variety of studies testing the physiological differences between lowlanders and peoples native to high altitude environments.

Craig and Masters student (under Craig’s supervision), Stephen Busch, are working in collaboration with colleagues from the UK to lead one of the major research arms of the expedition.

“Our studies are related to understanding how the body’s flight or fight responses — the sympathetic nervous system — is activated and regulated during exposure to high altitude, and how these responses differ between ourselves (the lowlanders) and the Nepalese Sherpa (the peoples native to high altitude environments).”

The team recently gathered in Kelowna on August 22nd to perform baseline testing on the lowlanders. Craig and his colleagues completed 14 studies related to their interests, while other members of the research expedition completed studies assessing brain, cardiac and blood vessel function. A true collaborative effort, many of the other researchers on the team (lowlanders) were part of the baseline tests, including Stephen who took part in a study investigating the influence of blood volume and blood cell count on cardiovascular function at altitude.

While the first round of baseline testing took place in Kelowna in late August, planning for the research excursion began a year ago.

“To say the coordination of this expedition has been a huge undertaking would be a significant underestimation,” says Steinback. “The University of British Columbia - Okanagan (UBCO) team has a good deal of experience with these types of trips, and we’ve been working closely with them as this trip is being planned.”

So, how huge of an undertaking is this expedition? Well…

“We, as a larger team, will transport the equivalent of four fully equipped laboratories — including ultrasound machines, blood pressure monitors, blood gas analyzers, exercise bikes, etc — first to Kathmandu, and then to a remote, high altitude research station in the Himalayas.”

“All of this equipment, as well as over three tons of gas tanks, personal gear and supplies will be transported by Sherpas, porters and yaks.”

Just to note — the tanks weigh well over 100 lbs each. One can see why researchers are so interested in understanding the physiological makings of peoples like the Sherpas, who can withstand this workload and thrive in high altitude environments. Most of the lowlanders on the trip will have issues carrying their 30L day packs.

The team will arrive in Kathmandu some time on September 28th, and will convert their hotel rooms into fully functioning labs for five days as they do baseline tests on Sherpas who have been flown down from higher altitudes. The team, and the Sherpas, will then fly in a small plane through the Himalayas to the Tenzing-Hillary Airport in Lukla (2800m). From there, they will then embark on a six-day, 50 km, +2200m hike to the research station, which is located at 5,050 meters a.s.l. in Nepal at the base of Mount Everest.

Considered lowlanders, both Craig and Stephen are not too sure how their bodies will acclimatize to the high altitude, and are curious to see how they’ll react in this environment. No amount of pre-training will fully prepare your body for the change of altitude and since there are currently no markers that determine who will thrive or who will decline in these environments, their trip will be full of discovery and unknowns.

“The results of our studies will help us answer questions about genetic traits related to how individuals acclimatize to high elevation conditions.”

“Over 140 million people worldwide reside at altitudes above 2500m. Millions more travel to these altitudes every year for work and leisure. We hope the data collected during our expedition will shed light on the physiology that allows some individuals, like the Sherpas, to thrive at altitude while others are prone to sickness and life-threatening illness.”

“We also believe that the data will be important for understanding some of the processes which lead to cardiovascular disease in clinical populations, which are periodically or chronically hypoxic — a condition in which the body or region of the body is deprived of oxygen supply at the tissue level. More commonly-known disorders associated with hypoxia are heart failure, COPD and sleep apnea.”

Editor’s note: We will follow-up with Craig once he returns from the research excursion to provide an update.

Heading to great heights in the name of research
Newsroom