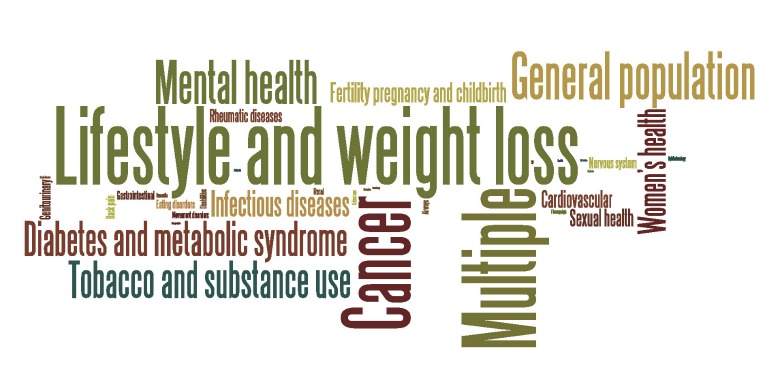 130725-hartling-sm-wordcloud-banner
This word cloud shows some of the most popular topics among health-care providers using social media to share information with their patients, according to UAlberta research led by Lisa Hartling. (Image courtesy BMJ Open)

(Edmonton) Health-care providers are using social media to share information and help patients manage their health struggles, according to recently published medical research from the University of Alberta. The most popular social media tools are discussion forums and online support groups, and the most common topics are cancer, lifestyle and weight loss.

Lisa Hartling, a researcher in the U of A’s Faculty of Medicine & Dentistry, was the lead investigator in the research review, published earlier this year in the peer-reviewed British Medical Journal Open. Her team studied the use of social media in the health-care arena by reviewing nearly 300 research articles about the topic.

“We wanted to see what social media platforms are being used and how they’re being used in the health-care setting to share information with patients and patients’ caregivers,” said Michele Hamm, who works with Hartling in the Department of Pediatrics, and managed the project.

“There are many platforms being used for a variety of different conditions. While the authors’ conclusions about social media were generally positive, the results don’t always show a significant effect.”

Hartling said a number of research teams from different parts of the world developed social media interventions to see whether the approach would help patients with a particular health issue, such as needing to lose weight. Then those research teams tested their ideas. The ultimate goal of many of the studies was to see whether social media can be used to promote healthy lifestyles in patients.

Hartling’s study referenced a background statistic from September 2012 that 72 per cent of adult Internet users seek support and medical information online, making it the third most common online activity.

This research was funded by the Canadian Institutes of Health Research. Hartling’s colleagues included other researchers from the Department of Pediatrics, a researcher from the U of A’s Faculty of Nursing and a colleague from Charles Sturt University in Australia.