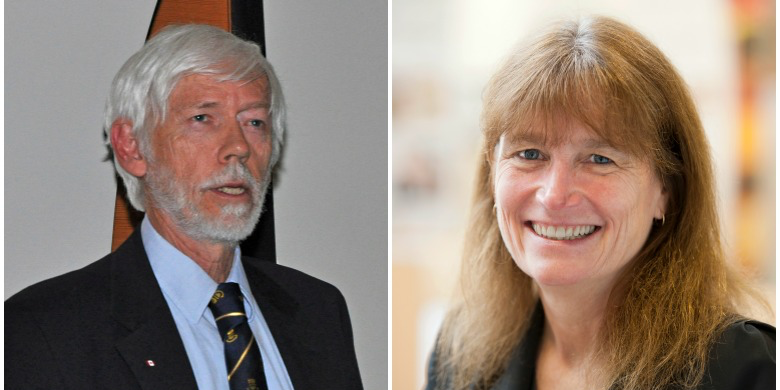 Dennis Vance and Sandra Davidge are two of the 21 UAlberta health researchers who received nearly $15 million in operating grants from the Canadian Institutes of Health Research.

(Edmonton) The federal government has provided 23 University of Alberta-led research projects with almost $15 million in operating funds to bolster research in all areas of health.

The funding, announced Feb. 13 by the Canadian Institutes of Health Research, the arm of the federal government responsible for funding health research, was part of the September 2013 Open Operating Grant Program.

Dennis Vance, researcher in the Department of Biochemistry, received more than $1.2 million for five years to look at a particular mechanism in the liver that has the potential to protect against obesity, Type 2 diabetes and cardiovascular disease.

Vance says the funding is a renewal of a grant he has held continuously since 1974.

“The research I initiated 40 years ago was trying to understand what regulates the manufacture of a molecule (a membrane lipid called PC) in all cells of our bodies. It was basic research on an important topic in biology. Little did we realize that this fundamental research would lead us into developing a treatment for obesity and Type 2 diabetes,” he wrote in a thank-you letter sent to the prime minister and others in the federal government.

In recent years, Vance’s research group has discovered that an enzyme (PEMT) that makes PC is a very good target for drug therapy as a treatment for obesity and diabetes, two major health issues in Canada.

And while Vance says the reliability of different research funding streams has become a concern recently, he says he is thankful for the ongoing support of the federal government.

“The support, for which I am very grateful, allowed me to focus on fundamental research and attract talented graduate students and post-doctoral fellows,” he said. “The basic research in 2014 will permit new discoveries and applications that we cannot predict at the present time.”

Two U of A researchers each received CIHR funding for two projects—Marcello Tonelli, researcher in the Department of Medicine, who will be studying cardiovascular risk among cancer survivors and leading a project entitled Epidemiology, Costs and Consequences of Multimorbidity; and Sandra Davidge, researcher in the departments of obstetrics and gynecology, and physiology, for a pair of projects relating to the long-term health of offspring.

“When we look at health around birth, whether it be around pregnancy or at the time of birth, we’re not looking at that short nine months or what happens when the neonate is born, but what really has an impact on long-term health.”

One project looks at improving cardiovascular dysfunction in offspring who suffered from poor fetal growth in the uterus. The other looks at better understanding the mechanisms behind pregnancy complications at an advanced maternal age.

“How you develop as a fetus and then as a post-natal infant will dictate your risk factors for chronic disease,” said Davidge, who is the director of the Women and Children's Health Research Institute at the U of A. “If we can have better pregnancy outcomes, we can have healthier long-term benefits as they relate to chronic disease.

Davidge says the amassed talent of her colleagues and the students who come through, as well as the infrastructure afforded her at the U of A, are second to none, and wouldn’t be possible without CIHR funding.

“The impact of the CIHR is critical because we live on grants,” she said. “The only way I can do research is through grant funding; there is no other way to get it done. The success of these grants means the research can be done and would not have been possible without it.”

See the full list of U of A recipients (PDF)