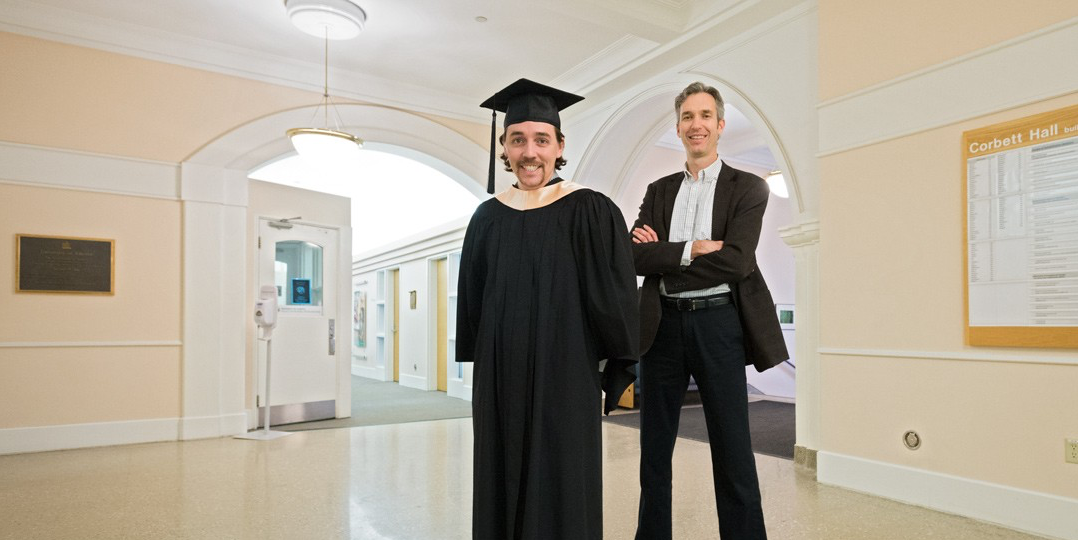 Callum Lavoie with his graduate supervisor, physical therapy professor Doug Gross, in Corbett Hall. Lavoie achieved his dream of going to medical school after finishing his master's thesis in less than a year. (Photo: Richard Siemens)

(Edmonton) When it comes to setting a goal and following a dream, Callum Lavoie has the heart of a champion. Setbacks happen—sometimes with crushing regularity—but quitting isn’t an option.

From the age of seven, the Edmonton-born-and-raised Lavoie dreamed of competing at national and Olympic swim meets. It became an all-consuming passion throughout high school and into his undergraduate studies at the University of Alberta.

One by one, his friends and teammates met qualifying standards in their respective events. Lavoie, meanwhile, struggled to reach the mark in the 400-metre individual medley, his race of choice.

“I failed for years. For years, I didn’t hit the standard—4:30.20—I’ll never forget it; that time is ingrained in my mind,” remembers Lavoie, who after each setback did his best to focus on the positives to keep moving forward.

The first time he achieved his goal, as a member of the U of A Golden Bears Swim Team, he tied the national mark, which fortunately still counts. The years of sacrifice and setbacks paid off, as did a healthy dose of perspective.

Lessons learned over his 15 years in the pool proved invaluable later in Lavoie’s education when his focus shifted from swim meets to his goal of becoming a physician like his father and uncle, both practising surgeons in Edmonton, and his aunt, a general practitioner in Bonnyville.

The first time Lavoie applied for medical school at the U of A after completing a bachelor of science, he didn’t get in. A second attempt led to a second failure, and the very real possibility that his goal might be unattainable.

Rather than give up, Lavoie dug in and set himself on another challenge: a research-intensive master’s degree in rehabilitation science. Rehabilitation had been an area of interest ever since his undergraduate days when he volunteered at the Glenrose Rehabilitation Hospital. He spent two summers working alongside an occupational therapist, helping patients recover from brain injuries through water-based rehabilitation.

That experience, and volunteering at the Glenrose’s child psychology unit and as a swimming coach for Special Olympics Edmonton, further opened Lavoie’s eyes about the role and opportunity that rehabilitation science can have on the health of Albertans.

“It’s just chance things that seem to direct where your life goes, and you end up going down a road, and sometime it’s very fortunate,” says Lavoie. “My volunteering experiences led me to the rehab field.”

More specifically, Lavoie’s interest led him to Doug Gross, an associate professor of physical therapy in the Faculty of Rehabilitation Medicine. Gross’s research focuses on helping individuals injured at work, specifically those with musculoskeletal injuries such as low back pain, by developing strategies to optimize treatment for a quick return to health, or to prevent work disabilities altogether.

Lavoie’s thesis focused on exploring how workers with musculoskeletal injuries responded to treatment, including whether there were differences in prolonged work disability between urban and rural populations.

“The rural populations in Alberta, under the criteria used in this study for what return to work and recovery from musculoskeletal injury are, had noticeably much poorer outcomes.”

It was an important finding, Lavoie adds, although none of the data—the type of work, income, health or social factors—explained why rural Albertans were at a disadvantage. It was an important lesson that research can take years just to identify a problem, and longer still to find solutions.

“It really signifies the need for more research in this field to look at it and what’s explaining this poorer outcome.”

Gross called Lavoie’s research an important first step toward identifying why rural Albertans are at a disadvantage and come up with some solutions. The results were recently presented at a national rural health conference in Saskatoon, and Gross hopes to follow up on some of the issues, applying for a grant from WorkSafe Alberta.

“It’s an important issue, one that’s never been looked at here in Alberta,” he explains.

Of all the students Gross has supervised, Lavoie was one of the most independent workers—and the only master’s student to complete a thesis in less than a year.

“I’ve never seen it, and that just speaks to how self-motivated he is,” Gross says. “He wanted to tear into every issue, every idea, everything we talked about to find out as much information as possible.

“The result was a thesis of very high quality, requiring minimal revisions.”

Through hard work, dedication and focus—habits entrenched during his 24 hours a week training for swimming meets—Lavoie managed to finish his thesis in a single year. He then parlayed that experience into a third attempt at medical school, this time achieving his goal.

Lavoie, who says he never felt any pressure to follow in his father’s footsteps, received the news in June while walking to Corbett Hall to work on his thesis. He quickly shared the news with his family, who had been extremely supportive throughout his studies. The news was particularly emotional for his 93-year-old baba, Anne Lavoie.

“She was so overwhelmed, she dropped the phone. I thought something terrible had happened—the line went dead,” Lavoie remembers.

With his master’s completed—he received his degree Nov. 19—and now three months into his first year of medical school at the U of A, Lavoie says he’s grateful for the support he’s received that helped make his goal a reality. It was a “surreal moment” when he and other first-year students received their white coat for the first time, he says.

“It’s been a goal of mine for so long; it’s been the longest, toughest thing I’ve had to do in my life thus far.”

Lavoie’s journey was longer than he’d planned initially, but after going through his trials, he wouldn’t change a thing.

“Four years ago, my mind was focused on getting into medical school, and it would have been a failure to not get in. But my mind has opened now. I’m glad it’s worked out this way because I learned a lot during my master’s degree. It absolutely helped me be a better professional, but more than anything it’s the growth experience in going through it,” he says.

“I am grateful for all the opportunities I’ve been given and thrilled that I’ve been able to enjoy success, but I am also aware that the journey is far from over. Many challenges lay ahead and I’m excited to face them.”