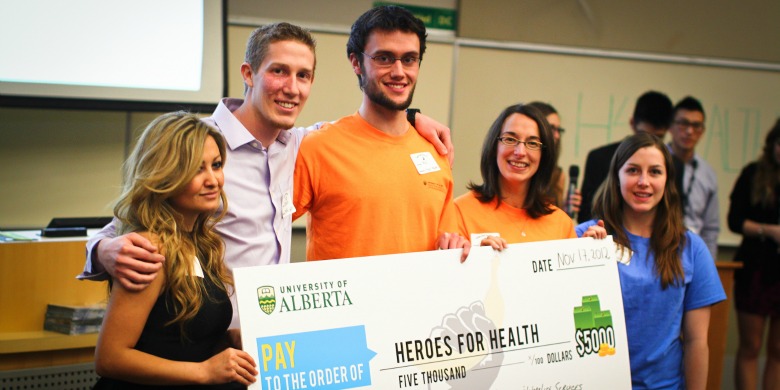 (Edmonton) A mentoring program and a traffic-light labelling system for campus food will soon be making the University of Alberta campus a healthier place for students, staff and faculty.

The two winning ideas from the second annual Heroes for Health Challenge, organized by the U of A’s Health and Wellness Team, were announced Nov. 17 at the Healthy Campus Symposium, where teams vying for two $5,000 cash prizes had to present their ideas to a panel of judges for final selection.

Five teams made it to the final round of competition.

“Through the Heroes for Health Challenge, we wanted to give students from all backgrounds an opportunity to take ownership of health and wellness on campus and to empower them,” said Meagan McLavish, a fourth-year nutrition student and member of the Health and Wellness Team.

Although the U of A has many widespread initiatives already, such as a farmers’ market and an annual dodgeball challenge, there is always room for improvement, she added. Survey results show that students don’t eat enough fruit and vegetables, don’t get enough exercise and feel their overall health could be better.

“We are encouraging everyone to get involved and take ownership,” McLavish said.

The $10,000 prize provided by University Wellness Services and Health Promotion and WorkLife Services will be evenly shared by each of the winning teams to make their projects reality. The new initiatives follow last year’s winning idea for a mobile fruit cart, which now makes regular rounds on campus.

Both winning teams are proud to contribute to campus health.

“Our group values having the privilege of empowering students on campus through grassroots initiatives like this one,” said Neil Brett, spokesman for the peer mentoring project.

The program is being piloted by the Faculty of Agricultural, Life and Environmental Sciences for its nutrition students and can serve as a template for other faculties and departments across campus, said Brett.

“We felt it was important to take peer support to individual department levels.”

As a nutrition student himself, Brett has experienced the stress that comes with being in a highly competitive program, and the team felt it would be valuable for individualized mentoring based on the needs of students in various faculties. Trained third- and fourth-year student mentors will help their first- and second-year classmates connect with existing campus resources and develop supportive relationships with fellow students, staff and faculty.

Braden Teitge is proud that his team’s concept of a traffic-light system for food choices was chosen to help boost campus health.

“I really love this university, and I believe it is the lifeblood of Edmonton. I absolutely love that this campus is striving to uplift the health of the whole people.”

Feeling that healthy food choices are an important part of campus wellness, the group of nutrition and medical students developed a traffic-light project that would label campus foods with simple red, yellow or green tags, with legends posted nearby.

“The simplicity of it makes the idea effective,” added team member Robin Lucciantonio, a nutrition student. “There is constant confusion over nutrition, so this gives people an opportunity to make their own decisions and feel confident about what they choose to eat.” The team is already working with campus food vendors to simplify nutrition labelling on hot and prepared items, she noted.

This year the Heroes for Health competition drew 20 entries from teams of students, faculty and staff representing 19 U of A faculties or departments. The proposed projects were all “incredibly creative and diverse,” said McLavish.

“We were impressed with the quality of the proposals; a huge amount of thought went into these,” McLavish said. The ideas ranged from herb boxes and indoor rooftop gardens to free fitness classes and health passports, and were showcased through posters at the symposium. Cash prizes provided by U of A Recreation Services were awarded to the best posters.

Among the finalists who didn’t win the Heroes for Health Challenge last week, several still plan to move ahead with their visions for a healthier campus using other resources.

Other Heroes for Health finalists

Some tea with that talk?

David Manuntag is one of two fourth-year business students who co-founded Uni Tea, a comforting tea and chat service on campus that is already serving students. Manuntag and a team of other volunteers started offering one-on-one time to stressed students in March of 2011 and have since made more than 30 visits, kettle and cookies in hand. Manuntag, who almost dropped out during his first year of studies, was revived by an in-depth conversation he had with a friend, and it gave him the idea to share that simple concept by giving a sympathetic ear to other students struggling with loneliness and worry.

“There are these conversations that have the power to change your perspective, and being able to talk on a one-on-one basis, it is a lot easier to go beyond the surface. And with a cup of tea or coffee in your hand, you take the time to slow down and think about things.”

U of Ate: Uplifting the Whole Stomach

Also concerned with campus eats, a group of students and staff developed a proposal for U of Ate: Uplifting the Whole Stomach, an awareness campaign focused on developing an online resource for diners with dietary restrictions, such as kosher or vegetarian needs. The idea came to team member Emily Dutton following a diagnosis of celiac disease.

“You can’t always find out if something is lactose-free or gluten-free by looking at a menu board,” she said.

Engaging the classroom knowledge of students in the areas of nutrition and food science and computing science, a website will eventually be developed for access by computer and as a smartphone app, outlining where the campus community can buy foods sensitive to dietary needs. “This is something that would really benefit the U of A’s diverse student population, staff and community,” Dutton said.

A team of finalists from the School of Public Health, concerned about the effects of sleep deprivation, put together Sleep Tight, Think Right, a proposal for a campus-wide awareness campaign that would use the talents of U of A students—particularly those in computing science, arts and drama—to create videos, posters and handbills.

“Sleep is a prerequisite for almost any other part of being healthy,” said Michael Schlegelmilch, one of several first-year students who designed the proposal. “If you’re suffering from sleep deprivation it is harder to find the energy to exercise, or to get to the grocery store for healthier food.”