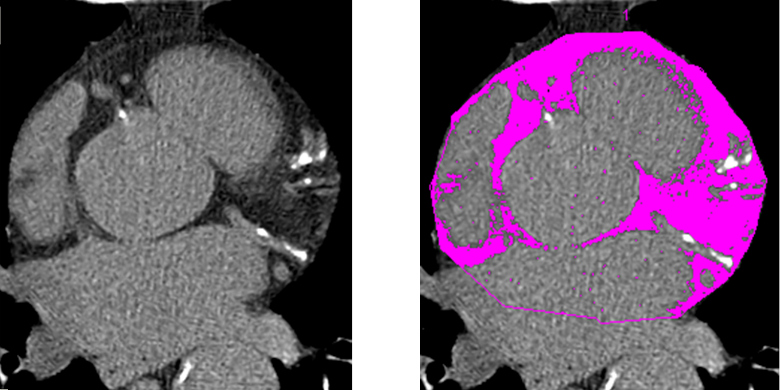 130916-heart-fat-ct-scan-banner
A CT scan of a patient's heart. The pink areas in the image at right show fat deposits around the heart, which can help predict the risk of death among people with chronic kidney disease.

“We wanted to know if this type of heart fat is related to poor outcomes for patients with chronic kidney disease, and it was a very clear marker of risk,” says Raggi, a researcher with the Faculty of Medicine & Dentistry at the U of A and the academic director of the Mazankowski Alberta Heart Institute. “The greater the amount of fat around the heart, the greater the mortality rates were in patients.”

Raggi collaborated with colleagues from Venezuela, Italy and the United States on the findings, which were published earlier this summer in the peer-reviewed journal Nephrology Dialysis Transplantation. Raggi, who works in the faculty’s Department of Medicine, is a world-renowned cardiologist who was recruited to the U of A.

His team examined CT scan results from 109 U.S. patients with chronic kidney disease from a randomized, clinical trial and discovered that as the volume of fat around the heart increased, so did the risk of death. For every 10 cubic centimetre increase in heart fat, the risk of death rose six per cent, notes the article. Patients with higher than average amounts of heart fat had five-year survival rates of about 45 per cent—markedly lower than the 71 per cent survival rate for patients with lower than average amounts of heart fat.

The research also revealed that patients with chronic kidney disease had levels of heart fat similar to those among patients with coronary artery disease, and that the volume of heart fat rose with age and weight, and was more prevalent in Caucasians. The findings also showed that high levels of calcium or plaque in the arteries and high cholesterol levels were strong predictors of large volumes of heart fat. Previous research has shown a link between this heart fat and plaque buildup in the heart arteries.

The article notes that patients with chronic kidney disease do not usually receive CT heart scans. The authors recommend that clinical practice should include CT scans for these patients in the future, with notes made on the test results about the amount of heart fat found.

“This is a new marker physicians can use for chronic kidney disease patients,” says Raggi. “It’s very easily implemented and costs little. Currently, it’s not used often enough in this part of Canada, and physicians should have a more flexible approach to consider looking for this marker, which can be used to quickly estimate risk for their patients. Don’t just look for calcium buildup in the arteries; look for fat volumes in the heart too.”

Raggi introduced heart CT scanning into medical practice in the United States 18 years ago. The test is now commonly used in the U.S. to predict risk of death for patients with chronic kidney disease.