By mentoring fellow surgeons, U of A’s Shao-hua Wang helps save thousands of lives. 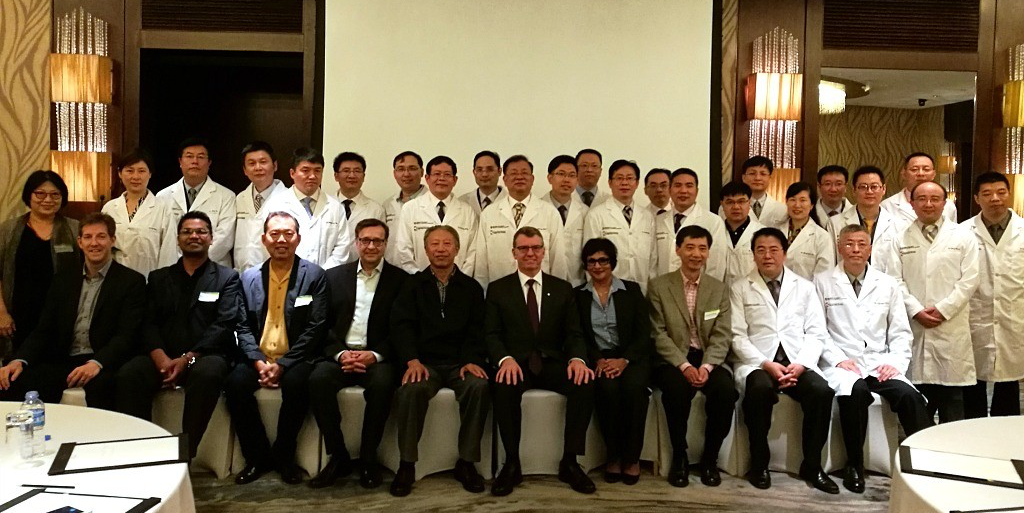 In 1956, University of Alberta surgeon John Callaghan performed Canada’s first successful open-heart surgery on 10-year-old Suzanne Beattie. Those first cautious beats of Suzanne’s good-as-new heart sent a wave of hope through operating rooms everywhere and marked the U of A’s emergence as one of the world’s surgical hubs.

In 1996, almost exactly 40 years later, the same kind of mettle shown by Beattie and Callaghan sent the U of A’s Shao-hua Wang back to his native China where he performed seven coronary artery bypass surgeries—the first such surgeries in Shanghai’s Changhai Hospital and among the first ever performed in China—and perhaps more important, began a process of mentorship that has seen dozens of China’s cardiac surgeons and cardiologists go on to save countless lives.

For scale, whereas the U of A does 2,000 open-heart surgeries a year, which is among the most in North America, China’s biggest hospital now does 10,000.

Not every coronary artery bypass surgery in China can be traced back to Wang, but thousands can—and the medical community has never forgotten. To mark the 20th anniversary of his work, the U of A and Chinese officials honoured Wang at an alumni event Oct. 15 in Shanghai for 30 U of A-trained cardiac surgeons, anesthesiologists and cardiologists, most of whom trained with Wang and his colleagues at the Mazankowski Alberta Heart Institute.

“Once in awhile, I think about going back to China to practise, to do something to repay my medical school for sending me here,” said Wang, who was joined by U of A dean of medicine and dentistry Richard Fedorak and U of A president David Turpin, who was in China for 10 days helping to further strengthen ties, for the event.

“But I have heard this many, many times from my Chinese colleagues—‘Don’t come back, stay in Canada, you can help us a lot more from there.’”

Six years later at a conference in the United States, Wang—by now a senior U of A resident—happened to run into an old colleague from China.

“He was shocked to find out I was doing formal training in Canada as a cardiac surgeon,” said Wang. “In the whole history of the country, nobody had done this. He asked if I would help them with their program.”

The issue that kept China’s thoracic surgery program in its infancy was an inability to get proper licensing abroad for its surgeons to get hands-on experience needed to perform the complicated procedures.

It wasn’t until 1996, when U of A administrators found a way through the bureaucracy, that the first three Chinese surgeons came over to train for six months.

“Not only were they here, they were assisting, they were doing cases,” said Wang. “I taught them looking from behind.”

Wang, who annually brings a full operating team over to China to help out, said the two dozen students who have trained under him, some for as long as two years, all returned to China as U of A alumni—and some have become star surgeons. Lin Han in Shanghai, for instance, is doing more than 450 open-heart surgeries per year.

“That is twice my workload over here,” chortled Wang in amazement. “You might say President Turpin was impressed.”

“That event in particular encapsulates for me the impact of our engagement with China,” said Turpin. “This is a powerful illustration of the widespread public good that extends broadly from work done on our campuses.”