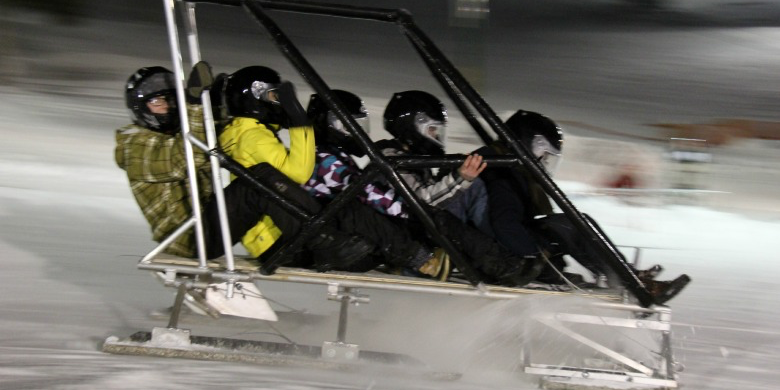 Racing downhill in a concrete toboggan isn't just exhilarating; it can also help engineering students get on the fast track to careers in construction.

(Edmonton) When you and four fellow University of Alberta students are hurtling down a steep, frozen hill in a 300-pound concrete toboggan, there just isn’t time to think about how the experience is broadening your career opportunities.

“It’s an out-there competition. There’s nothing else like it,” says Ryan Cusveller, co-captain of the Faculty of Engineering’s Great Northern Concrete Toboggan Race team. “But the hands-on experience you get is invaluable. When you’re in a job interview and they see you’ve had experience dealing with concrete and construction, that really helps.”

“Being a part of the GNCTR team gives you a lot of teamwork and hands-on experience that you just don’t get in courses. It’s a fun time too—I wouldn’t trade it for the world,” he adds.

This week, a team of about 30 U of A engineering students is taking part in the national concrete-toboggan challenge in London, Ont. Cusveller and his teammates are confident they’ll have a strong showing.

Teams are judged on their toboggan design, technical presentations, construction and performance in downhill runs that test speed and braking and manoeuvrability, and team spirit. Toboggans must weigh 300 pounds or less, and the only surfaces touching the ground must be made from concrete.

In recent years, teams have also been judged on incorporating sustainability into their projects, and this year the U of A team went all-out in that respect. For starters, they added porcelain from crushed basins and toilets that would otherwise have been destined for the landfill in their concrete mix. Last year’s team did the same, but this year the team used even smaller particles of porcelain to strengthen the mix and reduce the amount of concrete. They also salvaged parts from previous toboggans and incorporated them into this year’s sled, dubbed the “Cow-boggan” in honour of the team theme of Alberta beef.

Team costumes are de rigueur, so the team made its own cow costumes from used bedsheets.

Concrete toboggan races began 40 years ago when civil engineering students at the U of A competed against their counterparts from Calgary. Today, the annual competition draws student teams from virtually every engineering school in Canada.