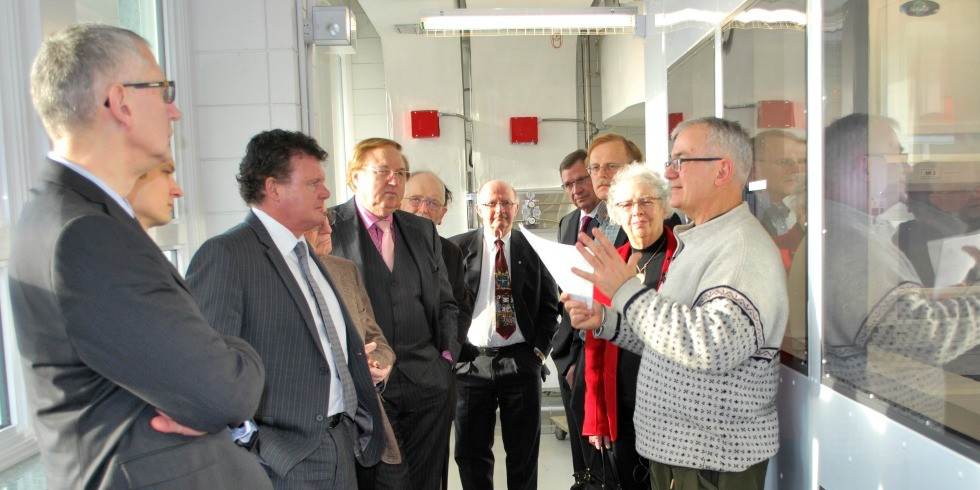 William Shoytk (right), Bocock Chair in Agriculture and the Environment at UAlberta, gives a tour of the $4.7-million ultra-clean lab during its official opening.

(Edmonton) Preliminary results from a University of Alberta study of the Athabasca River shows levels of heavy metal comparable to bottled water and some of the remotest bodies of water in Algonquin Park.

World-renowned soil and water scientist William Shotyk and his research team in the Faculty of Agricultural, Life and Environmental Sciences sampled water from 12 locations along a 125-kilometre stretch of the Athabasca River starting at Fort McMurray and heading downstream. The team analyzed the water, looking for heavy metal contamination. They then compared their results with those from other studies they had done in Coldspring Lake, the most remote lake in the 7,600-square kilometre Algonquin Park, and in the Nipissing River, where it travels across Algonquin Park.

Shotyk and his team found that the Athabasca River water averaged 25 parts per trillion (PPT) of lead, versus 40 PPT in Coldspring Lake and 180 PPT in the Nipissing River. The amount of lead in the Athabasca River also compares comfortably with levels found in bottled water.

Shotyk added that the Athabasca contains 50 PPT of antimony compared with 30 PPT in Coldspring Lake.

“It’s well within the range,” said Shotyk, who is also the Bocock Chair in Agriculture and Environment at the U of A. Bottled water in plastic typically contains 10 to 20 times more antimony than the scientists found in the Athabasca River. Shotyk said the values he published earlier for heavy metals in bottled water help to put the data from the Athabasca River into perspective.

The findings are consistent with Shotyk’s previous results obtained from examining sphagnum moss from 21 different peat bogs around the oilsands area, near open pit mines and processing facilities. In that study, published in Environmental Science and Technology, Shotyk found that atmospheric lead pollution is insignificant, with lead concentrations far lower than those found in surface layers of peat cores collected in recent years from bogs ranging from British Columbia to New Brunswick.

Shotyk announced his latest findings during the official opening of the $4.7-million SWAMP Lab, a state-of-the-art, ultra-clean lab in which almost everything is made of plastic to avoid contamination by metals.

The lab is equipped with precision instrumentation, including two mass spectrometers that can detect trace metals down to parts per trillion, and even parts per quadrillion. (One part per quadrillion is comparable to a single raindrop in the volume of Lake Huron.) Next month, when the lab takes delivery of Flow Field Flow Fractionation instrumentation, it will be the only lab in Western Canada and one of only two in Canada able to measure heavy metals in aquatic nanoparticles, which are 1,000 times smaller than the width of a human hair.

Alberta Environment and Sustainable Resource Development and the U of A funded the construction of the lab. The Canada Foundation for Innovation, Alberta Innovation and Advanced Education, and the Faculty of Agricultural, Life and Environmental Sciences each contributed to purchasing the equipment for the lab.

Shotyk is seizing the opportunity provided by the lab and its equipment to take a fresh look at heavy metal pollution in the area, with a view to determining what is occurring naturally and what is occurring as part of industrial activity in the oilsands.

His next step with the water study is to collect and analyze a similar number of water samples along the same stretch of the Athabasca River next spring and summer and compare those results with the ones he obtained this year.

The research is being supported by Alberta Innovates – Energy and Environment Solutions and Canada’s Oil Sands Innovation Alliance.

In addition to his studies of air and water, Shotyk plans to look at cumulative impacts of dust and metals on plants and soil.