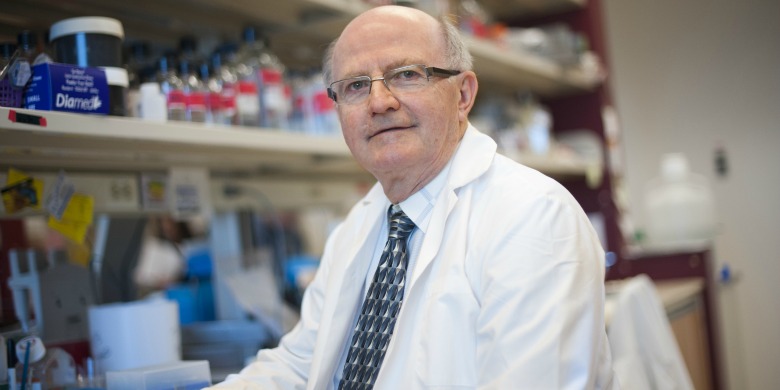 120912-lornebabiuk-banner
Lorne Babiuk, renowned virologist and U of A vice-president of research, was one of six outstanding researchers honoured with the first-ever Helmholtz International Fellow Award Sept. 10 in Potsdam, Germany.

“This award means that the University of Alberta has been once again acknowledged as one of the leaders of international collaboration,” said Babiuk of the fellowship given to researchers from outside Germany who have distinguished themselves through their work in Helmholtz-relevant areas. The honour includes a $25,000 prize to allow the winner to conduct research in Germany. “The award symbolizes the relationships that have been built and lays the foundations for further activities between the Helmholtz Association and the university.”

HAI is an international research partnership struck in 2009 between the U of A and the Helmholtz Association of Research Centres, Germany’s largest scientific organization, to develop solutions for cleaner energy production. Babiuk said a major achievement of the partnership since the initial $25-million investment by the Alberta government is an expansion beyond the initiative’s original energy and environment framework, which brings U of A and German scientists together to work on fundamental questions such as the use of deep geothermal energy, upgrading of fossil energy carriers, carbon capture and storage, sustainable tailings management, and remediation and reclamation of mined areas.

“Currently we are in the process of broadening this research co-operation with Helmholtz in the areas of health, resource technologies and remote sensing,” said Babiuk, who added that another future focus of HAI will be joint research on hepatitis with the Helmholtz Centre for Infection Research in Braunschweig, which was also the institution that nominated Babiuk for the fellowship award.

Babiuk was on hand in Potsdam to accept the fellowship and co-host the two-day science forum that saw upwards of 100 U of A graduate students, post-doctoral fellows, researchers and Canadian industry leaders descend on the GFZ German Research Centre for Geosciences for a conference that featured research lectures, poster presentations and tours of many facilities, including a pilot carbon dioxide storage site and an artificial water catchment.

Stefan Scherer, managing director of HAI at the U of A, said the science forum provides an exciting experience for the students to present their research to their German colleagues. “Many will be continuing their interaction on a scientific and personal level following the forum in Potsdam,” he said.