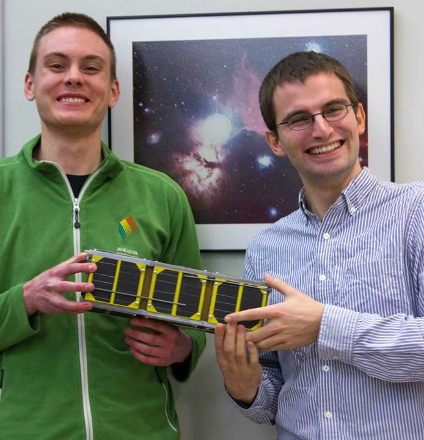 GIVING DAY 2015: On Giving Day, UAlberta will work around the clock to raise funds for programs and services that improve student mental health. Your donation will fund new and current programs that offer students healthy ways to cope with setbacks and pro 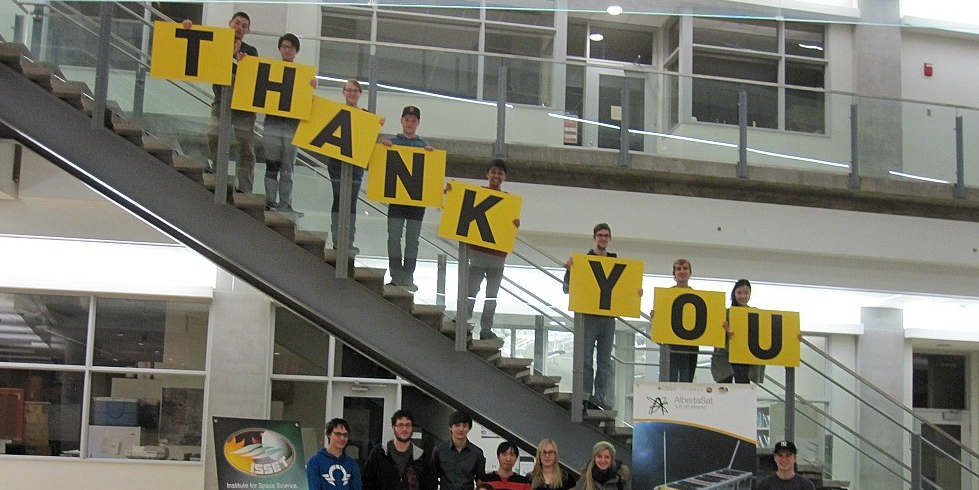 The student team behind the Alberta satellite project show their gratitude to crowdfunding supporters who donated more than $25,000 on Giving Day Dec. 2—and to the anonymous donor who is matching those donations, bringing the 24-hour total to over $50,000. Watch the students' thank-you video

(Edmonton) A University of Alberta student team plans to build and launch Alberta’s first satellite. They raised more than $36,000 through the university’s first crowdfunding campaign to buy their ticket on the rocket. Now they need to build it.

December 2 is UAlberta Giving Day, with a 24-hour matching gift challenge to fund the building of the satellite. Donations will be matched by an anonymous donor, up to a total of $50,000. In recognition of gifts of $100 or more, donors can put their name in space—engraved on a microchip on the satellite.

The students’ satellite, the Experimental Albertan #1 Satellite (or Ex-Alta 1), will be part of a swarm of 49 other cube satellites being launched from Brazil in 2016 as part of an international space mission. Cube satellites measure 10 x 10 x 30 cm, about the size of a loaf of bread.

“Cubesats are the future of space-based Earth science and space physics research, such as studying the impact of solar storms on our planet,” said Charles Nokes, the fourth-year engineering student who is the student lead on the satellite project. “There is so much yet to learn about our planet and what surrounds it, and large billion-dollar satellites are not a sustainable way of finding all the answers.”

Once in orbit, the students’ satellite will help us learn more about the northern lights and other space weather phenomena. Researchers could, for example, be better able to predict when and where northern lights can be viewed in the night sky.

Physics professor Ian Mann, one of the faculty members guiding the satellite team of about 60 engineering and science students, says space weather also has the potential to be as destructive as a severe storm here on Earth.

“It’s been estimated that a severe space storm could cause $1 trillion to $2 trillion of damage to the infrastructure and economy, with a four- to 10-year recovery period,” said Mann. “I would liken this project to the development of terrestrial weather forecasting. First, we have to understand the physics of the phenomenon before we can develop forecasting and warning systems. We’re in a discovery phase.”

The U of A has established broad scientific and engineering excellence in international space research. Projects include NASA’s Phoenix Mars Lander and the Canada-Norway Sounding Rocket exchange program (CaNoRock), a partnership with the University of Oslo and the Andøya Rocket Range in Norway. These projects give undergraduate students the opportunity to gain hands-on experience—and academic credit—designing sounding rockets and payload instruments.

Other programs include the award-winning Aurora Watch, a real-time monitoring system of geomagnetic activity in Edmonton that alerts subscribers when “northern lights” auroras will be visible.

The U of A’s first Giving Day coincides with Giving Tuesday, a day designated to encourage charitable giving, following Cyber Monday and Black Friday. The challenge blasts off at midnight tonight and continues until 11:59 p.m. Tuesday night.