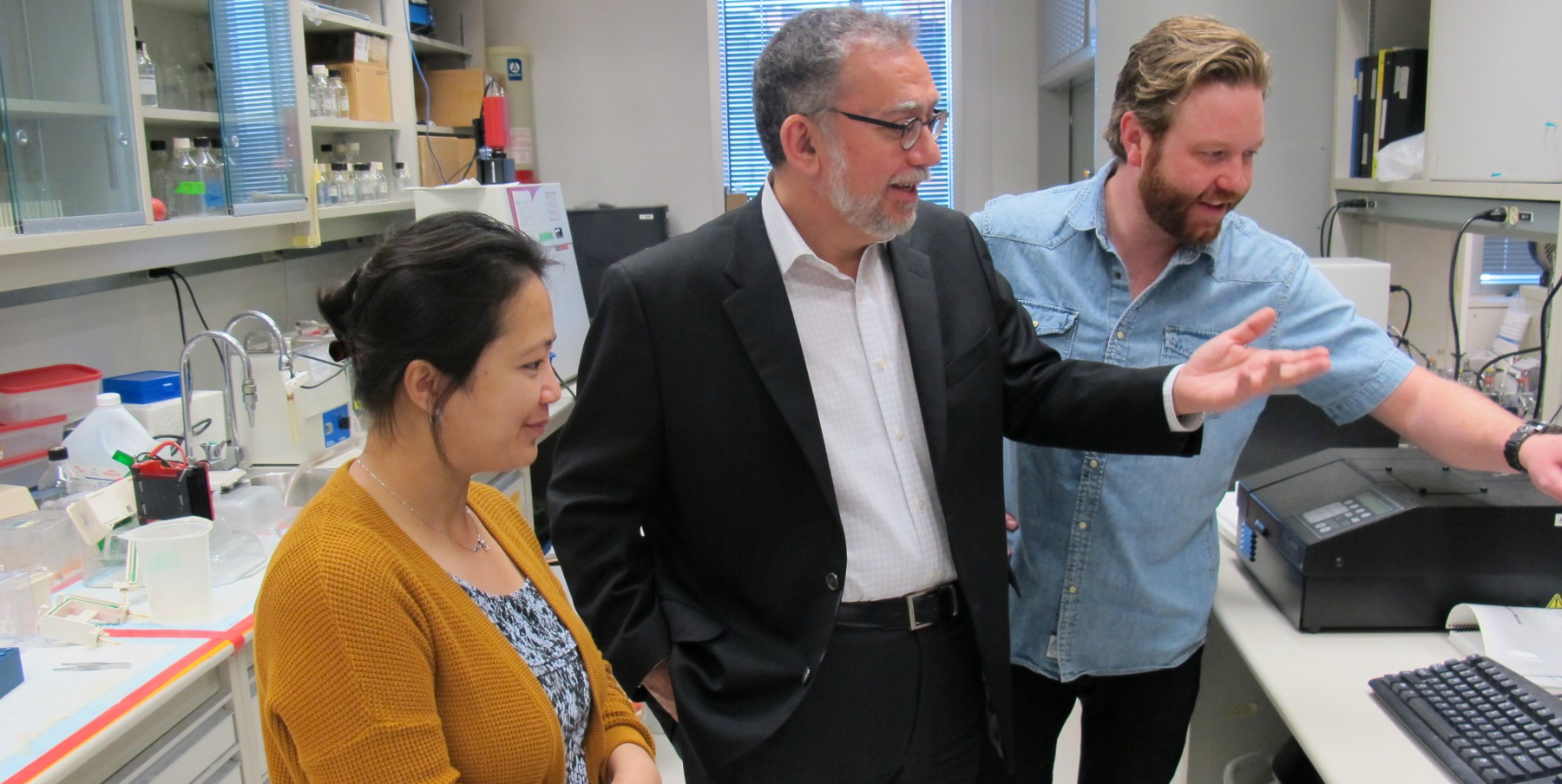 By AMY HEWKO and ROSS NEITZ

The possibility of a future without asthma is what really inspires renowned allergist Harissios Vliagoftis. In his role as the newly appointed GSK-CIHR Chair in Airway Inflammation, Vliagoftis aims to help make this possibility a reality. Thanks to a partnership between the University of Alberta, GlaxoSmithKline Inc. (GSK) and the Canadian Institutes of Health Research, initially established in May 2011, Vliagoftis’ research activities will continue through to 2020 with funding of just over $1.3 million.

There are few experiences that trigger as much fear as the inability to breathe—a sensation that approximately 2.4 million Canadians living with asthma know all too well. With its commitment to put patients first and its focus on innovation, GSK is pleased that Vliagoftis will continue to advance research in the area of respiratory disease.

“GSK recognizes the importance of investing in strong science and innovation and we are committed to making significant contributions to pre-clinical, clinical and medical research and development” said Amyn Sayani, director of research and development alliances for GSK, adding, “Our partnerships with CIHR and other Canadian academic institutions are an important mechanism by which we are able to identify promising new science from investigators in Canada, which is recognized for its leadership in a number of therapy areas.”

“Dr. Vliagoftis has shown true leadership in the area of respiratory disease in Alberta over many years,” said Brian Rowe, scientific director of the CIHR Institute of Circulatory and Respiratory Health. “His research holds the promise of specialized treatment for patients with asthma, minimizing discomfort and side-effects. I will be following his progress with great interest and want to congratulate him on this career milestone.”

In pre-clinical research, Vliagoftis and his team have already demonstrated the importance of focusing on a receptor called protease-activated receptor 2 (PAR2) which, when activated by allergens in the lungs, contributes to inflammation.

“My hope is that, by measuring PAR2, we can help indicate the severity of patients’ asthma and, more importantly, provide insight into the most effective treatment option,” said Vliagoftis.

"Dr. Vliagoftis is an outstanding example of a true translational scientist. He has an active clinical practice focusing on asthma patients, which has led him to develop a set of important hypotheses on the causative factors in the initiation of the asthma response,” said David Evans, vice-dean of research at the U of A’s Faculty of Medicine & Dentistry. “He is investigating these factors as part of his chairmanship, and I look forward to the outcomes of his research. I'm confident he will continue to make important contributions to improving the management of asthma."

About Dr. Vliagoftis and his research

In addition to his new chairmanship, Vliagoftis is also a professor of medicine, the director of the Division of Pulmonary Medicine in the Faculty of Medicine & Dentistry and a director with The Lung Association, Alberta & NWT. He works with a team of four graduate students, a post-doctoral fellow and a technician.

The study of PAR2 is the centre of one of his main interests: biomarkers. PAR2 is more prevalent on cells in the airways of people with asthma than it is in those without the condition and the receptor is present in larger numbers on cells that circulate in the peripheral blood in patients with more severe asthma. Vliagoftis believes further study of the receptor will help reveal more effective treatments.

“Biomarkers are of great interest for the research community these days, especially as we delve into personalized medicine, where a new drug may not be right for everybody with the disease,” he says, adding that test results could inform physicians of which drug would effectively treat the condition.

While Vliagoftis’s work is made possible through CIHR, he has previously received funding from Alberta Innovates – Health Solutions (the former Alberta Heritage Foundation for Medical Research) and the National Sanitarium Association. Importantly, these findings may also have applications beyond lungs. As he notes, the PAR2 receptor is often active in other conditions characterized by inflammation, such as colitis and chronic pain.