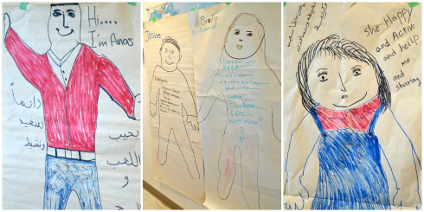 At the Edmonton Mennonite Centre for Newcomers, refugee children draw self-portraits to introduce themselves. Their parents draw the outlines, then the children fill in the details with help from their parents.

Anna Kirova saw the struggle of child refugees in her own family. Now her research could help support young newcomers as they start school in Canada. 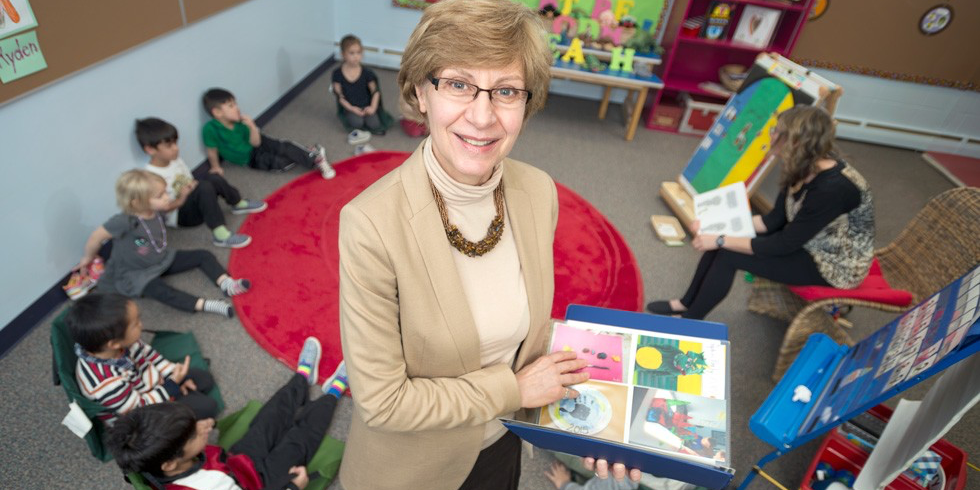 Anna Kirova is using her research to help smooth the way for immigrant children as they enter Canada's school system.

Twenty-five years after her family fled Bulgaria for a better life, Anna Kirova recalls a conversation she tried to have with her child’s school principal.

Her five-year-old son, exhausted by starting kindergarten twice in 12 months—first in Paris in French and then in Canada in English—was acting out, and she found herself in the principal’s office, trying to explain the trauma her little boy was grappling with.

“The principal was struggling to explain to me in French and I was struggling to relate to her in English. I saw no understanding from her, and it made me realize that without support, refugee children can be labelled as anything, from attention deficit disordered to troublemakers—children who don’t fit within the school system.”

It was a revelation that galvanized Kirova, who held a PhD focused on children’s play, to take a second doctorate, concentrating on children’s experiences of loneliness in school. Now, decades after her own ordeal, her research demonstrates how best to smooth the way for immigrant children as they enter an unknown school system.

Kirova, a professor of early childhood education in the University of Alberta’s Faculty of Education, watches TV news teeming with families like hers as they flee Syria, and is concerned about how their little ones will cope—bewildered, even traumatized—as they start school in Canada.

“I realized, through my son’s experience, how lonely and isolated even young children can be without the language skills to communicate with other kids,” Kirova said. “Those from wartime situations can face even more of a challenge as they may suffer from post-traumatic stress disorder, which may not be well understood by school personnel.”

It’s important, she noted, to provide activities that help such children develop the friendships they need to use language in a meaningful way so they can become part of the fabric of the school. If they have no access to their peer group, they suffer; they begin to exhibit anxieties, frustration and loneliness. That can lead to depression and other serious mental health issues.”

Education systems in Alberta, Canada and globally need to do more, and not just for the wave of refugees currently pouring in from Syria, but for all vulnerable children struggling with cultural change, Kirova believes.

“We are not doing enough. As an education system, we need to redefine the way we work with these children,” Kirova said

Canada’s challenge as a multicultural country is the many cultures and languages living in one classroom, and how to meet the needs of children who come from diverse backgrounds. That means those who work with them need to develop intercultural skills, she said.

Based on collaborative research with Kurdish, Somali and Sudanese communities, Kirova identified a handful of measures for classroom success—approaches that help address the complex needs of refugee children and their families.

The key, she believes, is more meaningful collaboration among the schools, the parents and the larger ethnic community.

“When they come to Canada, these children are straddling two cultural worlds,” Kirova said. “To bridge those worlds involves giving them a sense of belonging and support, and that comes from providing continuity between home and school.”

To ensure refugee children are successfully eased into the Canadian school system, parents and their ethnic communities must be included in developing classroom curriculum, with an emphasis on the family’s home language and culture, so those community ties aren’t broken as the youngsters master English and become Canadian citizens. Maintaining ties to both worlds is crucial to a child’s sense of self-worth and belonging, Kirova said.

“Failing to do that results in a generation of young Canadians who don’t belong because they face racism in school or the workplace, but they don’t belong to their ethnic communities either, because they can’t communicate. They’re left in limbo.”

“Cultural navigators” who themselves have the refugee experience in Canada also play a vital role, not only to fill in language gaps, but also to act as cultural liaisons with a daily presence in the classroom. As well, measures like regular parent and team meetings help develop culturally sensitive ways of knowing and delivering support to the students.

All sectors, including governments, school boards and immigrant service providers, need to step up and invest in tackling the complex issues posed by multiculturalism policies brought in 40 years ago, Kirova said.

“The ideals are good, but have not resulted in outcomes we were all hoping for because we have not invested enough in the education system. Issues of diversity are present and real, but we always come back to the point of, ‘Can we afford it?’ The economic struggles we have at the moment don’t allow for us to dream big. But we have to ask ourselves, can we afford not to have the best programs possible?”

Read more of Kirova’s thoughts at Migration Views, a U of A website featuring reflections on migration and the Syrian refugee crisis by more than 30 academics, students, alumni and members of the broader community.