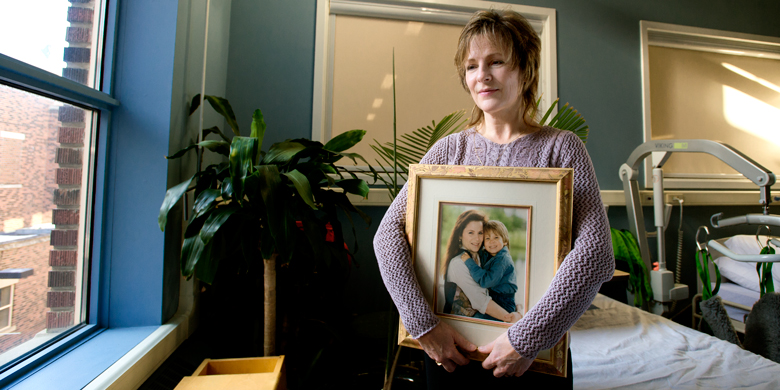 Madeline Rainey holds a portrait of herself with her son when he was a child. Rainey hopes a UAlberta study on aggression in kids with autism will spur more research and raise awareness of how families are affected. (Photo: Richard Siemens)

(Edmonton) Madeline Rainey admits she compares her son’s existence to a life sentence.

“I watched him suffer and be blamed and judged,” says Rainey, whose son Eric* has autism spectrum disorder with aggression. “I keep asking, ‘When is someone going to do something and recognize the lifelong pain that my kid and I have to live with?’”

Though autism and aggression are not synonymous, many children with autism spectrum disorder (ASD) show aggressive behaviour, which has a significant and lifelong impact on families, according to a University of Alberta study.

“Little has been done to understand families coping with autism and aggression, and if these families don’t receive the support they need, things can get bad very quickly,” says Sandy Hodgetts, assistant professor of occupational therapy in the Faculty of Rehabilitation Medicine and lead author of the study. “The percentage of children with ASD and aggression is not known because aggression is not a core symptom of autism.”

Though the study was small, it was the first to look at families dealing with autism and aggression. The researchers followed 15 families with male children and young adults with varying levels of autism. Nine of the 15 families brought up their child’s aggression as a barrier to services. Parents described the impact of the aggression as “constant,” “never-ending” and “almost unbearable.” One mother said her son’s aggression had become so bad that she was “about ready to be locked up.”

“The aggressive acts are not malicious. There needs to be better understanding and mechanisms in place to train and support respite care providers and health-care professionals in this area.”

Rainey agrees that specialized training could make all the difference. When Eric was in grades 11 and 12, he had a teacher who majored in special education. She was able to be creative, understand Eric and not be deterred by his aggression.

“I’m grateful for her and we still keep in touch,” says Rainey.

Though her son is now 21, Rainey hopes this study can spur more research on autism and aggression. “It raises awareness on the impact on families and can hopefully help remove the social stigma for children and parents.”

She hopes that with positive change and awareness, perhaps one day other families don’t have to go through what she went through.

“We went from daycare to daycare, from caregiver to caregiver. I was told the reason my son was aggressive was that I was too domineering as a mother. And I was told I was too permissive. I was told to feed my child only organic food so he wouldn’t have these behavioural problems. They assumed he was some kind of monster and I was to blame,” she says. “It takes a piece of your soul.”

The study was published in the journal Focus on Autism and Other Developmental Disabilities.

* Editor’s note: Name has been changed.