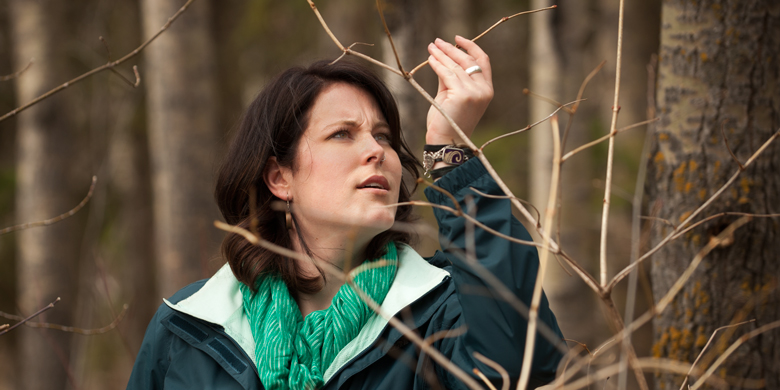 130515-laura-gray-banner
Laura Gray developed maps with projections of suitable habitats for trees based on climate predictions for the 2020s, 2050s and 2080s. (Photo: Richard Siemens)

(Edmonton) University of Alberta researchers have developed guidelines that are being used by the timber industry and government foresters to get a jump on climate change when planting trees.

Maps developed by Laura Gray, a post-doctoral fellow in the Department of Renewable Resources at the U of A, provide projections of climatically suitable habitat for tree species based on climate predictions for the 2020s, 2050s and 2080s.

“The information helps forest managers have more confidence in their decisions on what and where to plant. It allows them to more accurately assess the climactic risk,” said Gray, co-author of the study with associate professor Andreas Hamann.

The study addresses concerns that many populations of wide-ranging tree species, which are adapted to local growing conditions, may now or in the future actually lag behind their optimal growing environment because of changing temperature and precipitation conditions. The work is the first of its kind to tackle multiple potential climate scenarios for a large number of tree species across western North America.

The U of A study also considers patterns of climate change observed from the 1970s until recently. The researchers found that on average, populations already lag behind their best climate niche by 130 kilometres in latitude or 60 metres in elevation.

Gray and Hamann’s study has produced several maps and tables that document recent species habitat shifts and predict future ones. Generally, Gray said, forest managers should consider using seed from more southern climates or lower elevation environments. The seed should still be of the same tree species, rather than introducing a new species into a foreign environment, she added.

Foresters in British Columbia have started using the study’s results as one of the tools to aid assisted seed migration strategies, Gray noted.

The study’s findings help “inform and effect change in reforestation policy, so that those efforts can be leveraged to improve resilience and productivity of Alberta’s forests under changing climate,” Hamann said.