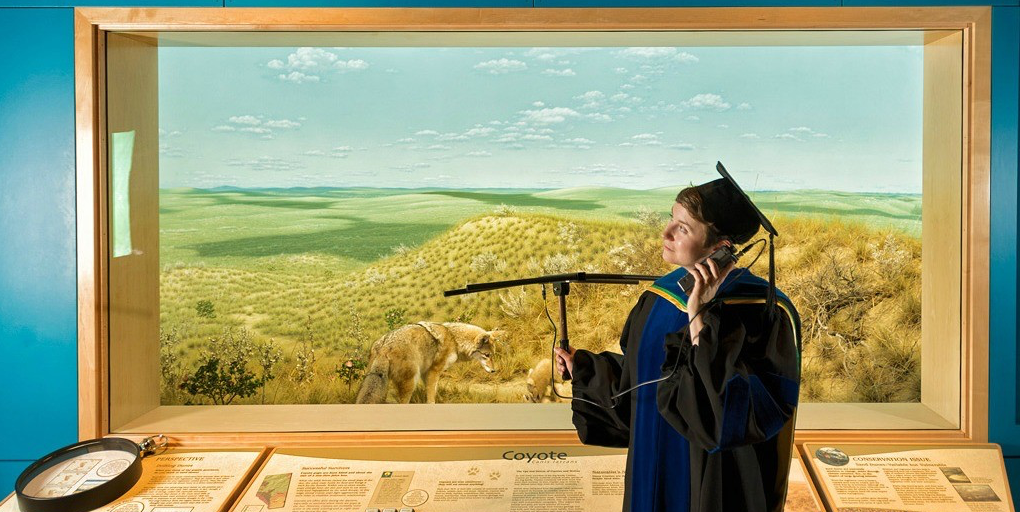 Maureen Murray used GPS collars to track coyotes living in the Edmonton area to understand how they're adapting and use that knowledge to prevent conflict between coyotes and humans. (Photo: Richard Siemens)

(Edmonton) There is perhaps no more striking example to illustrate what’s at stake in Maureen Murray’s research. Just two hours before our scheduled interview, she calls to cancel, explaining that a coyote wearing a GPS collar has been hit by a car, disappearing into the bush. Murray needs to find the coyote and retrieve the collar.

The East Coast native has spent the past five years studying urban coyotes in Edmonton. Her research has been crucial in helping the public understand how to live with the animals and avoid conflict. Under the supervision of biologist Colleen Cassady St. Clair, Murray has been collecting data for the Edmonton Urban Coyote Project, a joint venture between the city and the U of A.

"I feel so proud to be graduating from the U of A,” says Murray. “The wildlife ecology program here is one of the best, certainly in Canada and even North America. There are so many profs at one institution studying wildlife ecology, which is really rare."

Her interest in biology started in her Prince Edward Island high school, where she decided she’d rather study “whole animals and their behaviour” in the field than be confined to a lab looking at cells through a microscope. During her undergrad days at Dalhousie University, she studied songbirds, a fitting complement to her other preoccupation—the trombone.

Gradually Murray became more interested in how animals learn, and the wily coyote seemed like the perfect candidate: “If you're thinking about animals that learn things, coyotes have learned to live in virtually every environment in North America, including really dense urban areas."

When she looked deeper into the U of A’s biology department, she discovered that St. Clair was just getting the Edmonton Urban Coyote Project off the ground in response to growing concerns about rising populations of the animal in city neighbourhoods. So five years ago she enrolled in a doctoral program to help St. Clair with her research.

Maureen Murray talks about her PhD research with the Edmonton Urban Coyote Project.

Using GPS collars, which send location co-ordinates every two hours, the two have been tracking coyotes to better understand their behaviour. They analyze hair samples and collect scat to find out what the coyotes are eating and to gauge their general health, and they compile reports from residents to see how often the animals come in contact with humans.

“We had a lot of different data to put together a comprehensive picture about how to prevent conflict between coyotes and humans," says Murray.

Most rewarding, she says, have been her working relationships with the city and outreach organizations such as the John Janzen Nature Centre and the Valley Zoo, as well as the rare opportunity to put her findings to practical use, especially in helping design an “aversive conditioning” campaign that discourages coyotes from approaching residential areas.

Murray was also lead author on a recent study in Proceedings of the Royal Society B that showed a correlation between disease in coyotes and the consumption of human food.

“It's nice to know as a grad student that your work isn't going to just sit on a shelf somewhere, that no one is going to care about your results,” she says. “The city cares about what we've found and can use it to prevent disease transmission, prevent conflict and understand what attractants bring coyotes into backyards."

She says St. Clair’s supervision has been crucial to her success, lending her the freedom and support to thrive. But this fruitful relationship goes both ways, says St. Clair.

“[Murray] has some extra kind of insight and enthusiasm for bringing out the best of my own ideas and abilities and weaving them with her own to support co-discovery,” says St. Clair. “I think all professors are aiming for something like that—to adjust their own style and contributions to bring out the best in their grad students. But it's actually a two-way thing. That's what made it such a privilege to work with Maureen.”

Now that she's successfully defended her thesis, Murray is helping St. Clair with grizzly bear research in Banff National Park, trying to determine why the bears get hit by trains and how it can be prevented.

As for music, Murray has hardly left that behind. She played her trombone in the U of A jazz and concert bands, the MacEwan jazz band and other bands around Edmonton. But she’s now hooked on urban wildlife, searching for a post-doctoral fellowship or academic post that will allow her to further explore the creatures that live in our midst.

"I find it fascinating how animals and people are going to have to learn to live together,” she says. “We're not going to get rid of [urban wildlife], and besides, people like having the animals around."