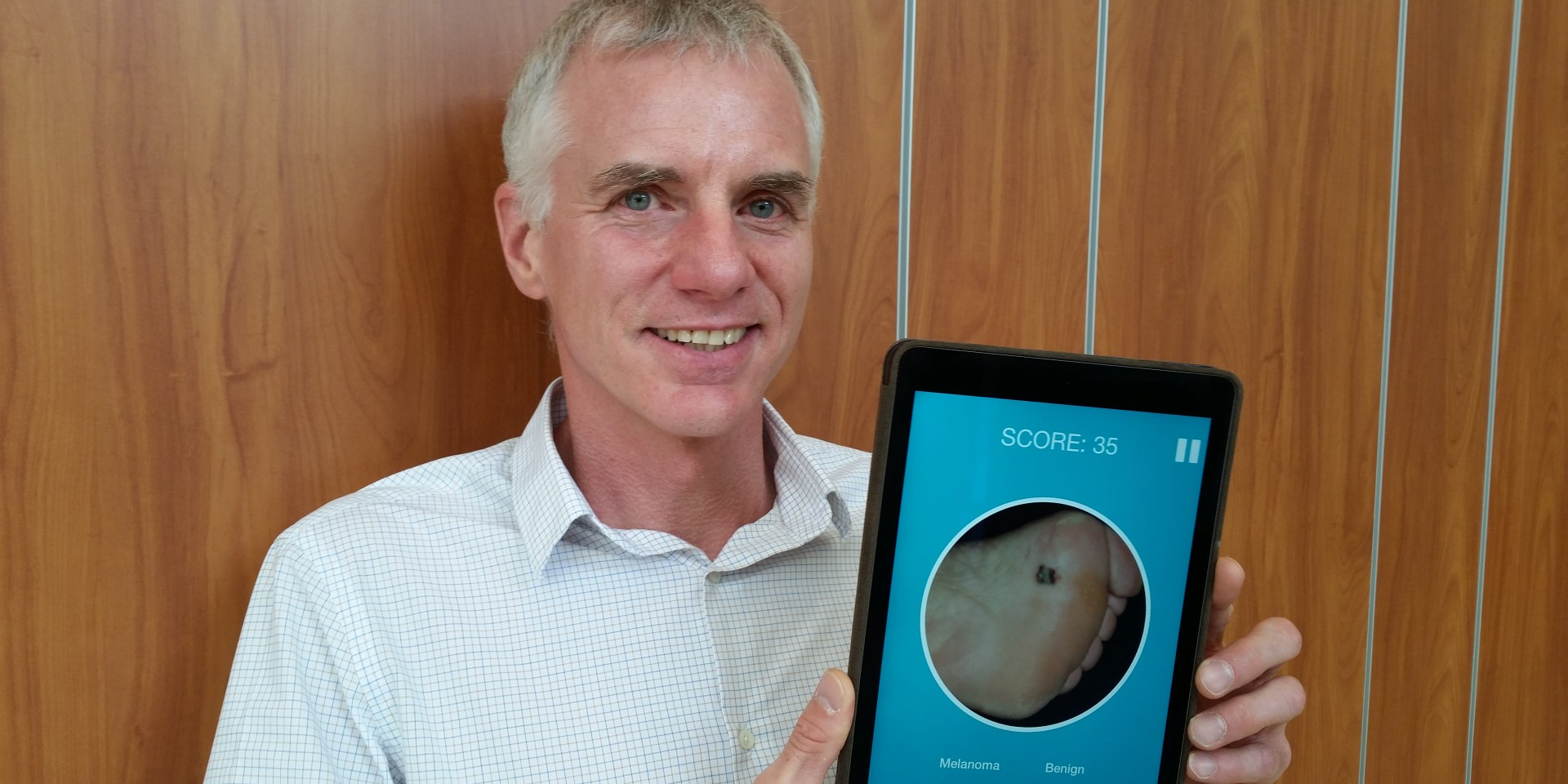 Liam Rourke shows the app that has been developed to help train health professionals to distinguish melanomas from harmless skin lesions.

(Edmonton) Each year, thousands of Canadians are given the news: they have skin cancer. It's the most common form of cancer in Canada and around the world, but if it is detected early, survival rates are extremely high. But according to a medical professor at the University of Alberta, early detection doesn’t happen nearly as often as it could.

“The difficulty is that people have a really hard time detecting skin cancer melanomas early,” says Liam Rourke, an associate professor in the Faculty of Medicine & Dentistry’s Department of Medicine. “One of the reasons is that the melanomas look exactly like freckles and moles and other common benign lesions that everybody has.

Rourke is the lead author of a study published in JAMA Dermatology that examines best practices in teaching medical students and health professionals how to detect, categorize and identify skin lesions. In a meta-analysis of other studies in the field, his team found that many traditional teaching methods focus on what some would argue are the least important aspects of the job.

“The conventional sense of how this should be taught is by giving people factual knowledge about skin and its normal and abnormal development. We were surprised to see that there was very little effort to stress the visual part of this task," says Rourke. "There was very little organized and systematic effort to train people’s visual systems to discriminate between two things that look a lot alike.”

The researchers concluded there’s much room for improvement in how health professionals are trained. Based on the results of the study, Rourke’s team is developing perceptual training modules they hope to test through further studies.

According to Rourke, an initial pilot study has already shown promising early results. In it, a small group of undergraduate students with no medical knowledge, training or vocabulary were given iPads containing a module showing different types of skin lesions. Over the course of about two hours the students were presented with several examples of melanomas and non-melanomas. At first the examples were labelled as such; then the pictures were shown again without labelling. The students were asked to identify the examples correctly. As the students progressed through the module, the examples became more varied and complex.

“We saw an enormous effect,” says Rourke. “Within the two to three hours of training, they reached a level of expertise that was close to the level of a dermatology resident.”

He adds, “The training translates well to other groups because it doesn’t rely on learning a lot of anatomy or physiology or biomedical knowledge about skin lesions. The task is simply to identify skin cancers and differentiate them from benign lesions.”

Research funding was provided through the Faculty of Medicine & Dentistry’s Department of Medicine and the University Hospital Foundation.