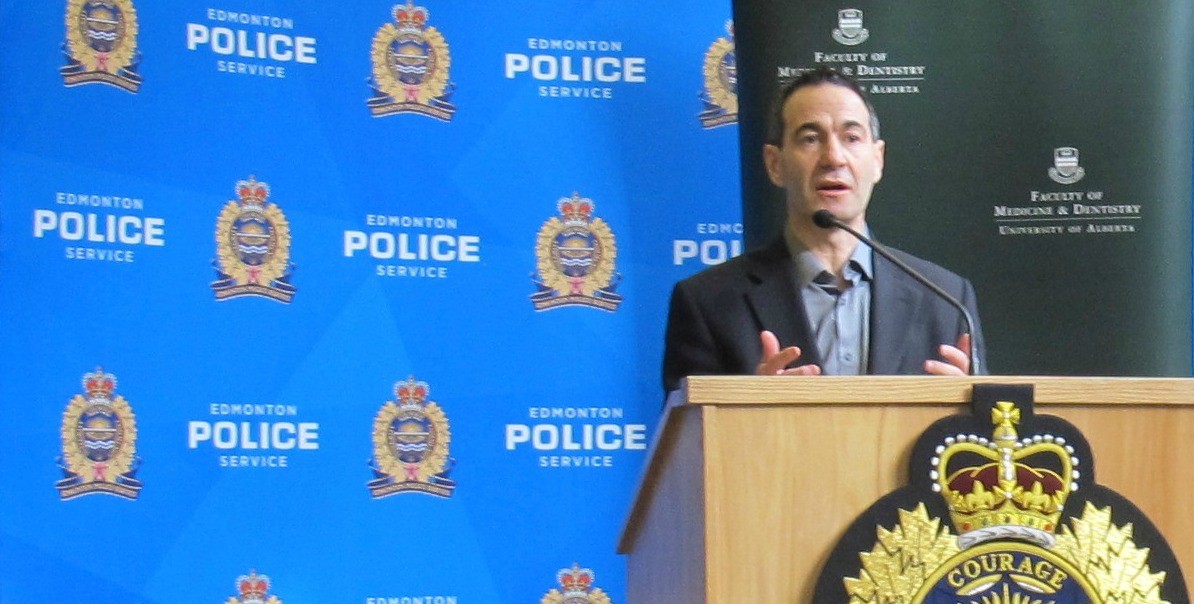 130318-petersilverstone-banner
Peter Silverstone discusses the police training program he designed with a team of UAlberta researchers. Edmonton police officers who took part in the program were more likely to recognize situations involving mental health issues and less likely to use physical force or weapons in those situations.

(Edmonton) Researchers with the University of Alberta’s Faculty of Medicine & Dentistry designed a one-day training program for the Edmonton Police Service that resulted in officers being more likely to quickly identify mental health issues during a call, and less likely to use physical force or a weapon in those situations. The training resulted in long-term behaviour change in the officers and saved the police force money because mental health-related calls were dealt with more efficiently.

The pilot study, published in the open access and peer-reviewed journal Frontiers in Psychiatry, noted the following post-training findings:

The principal investigator was Faculty of Medicine & Dentistry researcher Peter Silverstone, who works in the Department of Psychiatry. He says the key goals of the training were to improve officers’ empathy, communication skills and ability to de-escalate a tough situation.

The training involved actors role-playing six realistic scenarios with police officers. Sometimes the mental health issue was easily discernible, but in other scenarios the issue was masked or could be misconstrued as a drug addiction.

“I think what worked with the training program is that we managed to engage officers at a strong emotional level, not just an intellectual level,” says Silverstone. “I think that’s why it carried through to the work they do on a day-to-day basis. And that’s why the behavioural change was long-lasting.

“It can be hard to differentiate between mania and a drug-induced high, or between psychosis and drug-induced problems. What we wanted to get across to officers is to not make assumptions right away. There may be underlying mental health issues that may not be immediately obvious or that may mimic drug- or alcohol-related symptoms.”

Insp. Kevin Kobi, with the Professional Development Branch of the Edmonton Police Service, also says the program is relevant to police officers’ daily experience: “Every day the front-line members of the Edmonton Police Service come face to face with people in crisis situations. This training complements our communication training by providing officers the tools to recognize and effectively deal with someone who is struggling with mental illness.”

After the training scenarios, officers received feedback from the actor involved and from another actor who observed the interactions. The training program encouraged police behaviour such as verbally expressing empathy, maintaining eye contact, using non-threatening body language, “mirroring” the actor’s movements and sharing non-threatening information.

Silverstone says that with many unfortunate interactions between police forces and people with mental illnesses, the goal “is to try and stop these tragedies from occurring in the first place.” The paper noted that studies in Canada and the U.K. have shown that 37 to 48 per cent of people fatally shot by police had underlying mental health issues. Silverstone adds that better training is warranted because it is increasingly common for police to be first responders in calls involving those who are mentally ill.

The training program designed by Silverstone and his team cost $120 per officer and resulted in long-term savings of an estimated $80,000 because subsequent calls were dealt with more efficiently.

Silverstone’s team is working with the Edmonton Police Service on a second phase of research, to expand the study to include a larger cohort of officers and to interview a broader range of people who are directly affected by the police. The first phase involved 663 officers.

The study was funded in part by the Centre for Effective Business Management of Addiction Treatment at the University of Alberta School of Business, as well as the Edmonton Police Service.