Helping students see the world through a different lens

I’d like to think that, as sociologists, the work we do encourages institutions and governments to change the way they organize society.

For more than 30 years, University Cup winner Harvey Krahn has opened the eyes of students, communities and policy-makers to social inequality. 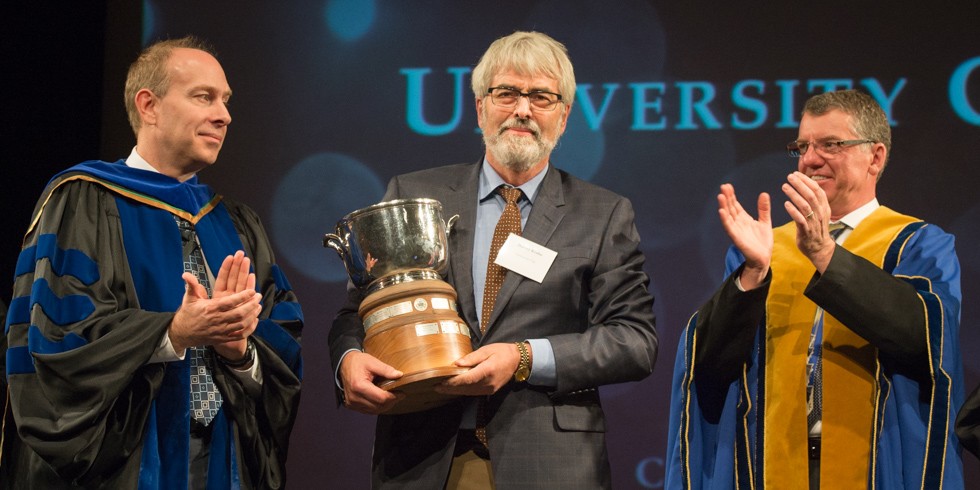 Harvey Krahn is congratulated by President David Turpin and Provost Steven Dew on receiving the University Cup, the U of A's highest academic honour.

(Edmonton) Growing up in Saskatchewan, Harvey Krahn attended a Mennonite high school, where he was exposed to ideas about social justice and the value of higher education.

Influenced by well-educated, well-travelled teachers who were steeped in the humanities, Krahn found himself drawn to the arts. After studying English and philosophy for two years at the University of Saskatchewan, he worked and travelled for a few years, then returned to university in London, Ont. There, he became intrigued with sociological research by one of his professors, showing a link between poverty and mental illness.

“It fit in with my social justice concerns and the belief that inequality should be addressed and not ignored.” The study had an elegant design and revealed clear findings, and showed Krahn how sociology provided a pathway to unravelling and understanding the complexities that affect the human condition.

The prospect of one day conducting similar research motivated him to earn undergraduate and master’s degrees in sociology from the University of Western Ontario, followed by a PhD from the University of Alberta. Krahn then launched a 32-year career at the U of A’s Faculty of Arts, where he has conducted groundbreaking work on social inequality as it relates to the most vulnerable in the labour force, and in the education and immigration systems. He’s also taught hundreds of U of A students how to “view the world through a different lens,” supervised and mentored scores of undergraduate students and brought his research into the community arena.

That commitment to employ social science in research, through teaching and at the community level has earned Krahn the University Cup, the U of A’s greatest academic honour, recognizing his combined lifelong achievements in teaching, research and community service.

Krahn is among a long list of outstanding faculty, staff and students being honoured at the annual Celebrate! Teaching. Learning. Research event being held Sept. 23. All are welcome to attend.

Though 32 years may seem a long time to stay at one school, Krahn has no regrets about his decades of work at the U of A. “It’s been a good place to work, a place that has over 30 years focused on building its research capacity, but it has done so without sacrificing its commitment to community work and teaching.”

“It’s a wonderful job,” he added. “As university professors we are blessed—we have autonomy, we are respected and we work in a knowledge-rich environment which encourages us to stay involved.”

Krahn, whose research in the sociology of work and education is recognized as among the best in Canada, is the author or co-author of three books, including a popular university textbook exploring social inequality in Canada’s labour market, now in its seventh edition. He’s also published (often with co-authors) 84 refereed research papers, 23 book chapters and more than 40 research reports. His extensive and collaborative work with other researchers—including graduate students—in attempting to better understand the causes and effects of social inequality has had an impact on public policy and social programs.

Meshing his work with community service is Krahn’s ultimate career goal and his greatest hope as a scholar is to make a difference.

“I’d like to think that, as sociologists, the work we do encourages institutions and governments to change the way they organize society.”

Some of the highlights of Krahn’s three decades of research include the work of his team at the U of A’s Population Research Laboratory, sifting through thousands of confidential documents to reveal discrepancies in decision-making by the Alberta Eugenics Board, which operated from 1929 to 1972.

He also led a notable 25-year longitudinal study that began in 1985 and surveyed hundreds of high-school graduates six more times as they moved from youth to mid-life, focusing on how their lives are shaped by family background, higher education and unemployment. Over the past decade, the study has also been pushed in new directions by Krahn’s fellow U of A psychology researcher Nancy Galambos.

Originally slated to run just two or three years, the ongoing study has become a rich source of data on many topics. Team members including U of A human ecology professor Matt Johnson continue to analyze the data and challenging some “established wisdoms” along the way—among them the myth of the mid-life crisis. “The study shows that people are, in fact, more satisfied at mid-life,” Krahn said.

Krahn continues to look for opportunities to take his work into the community. He is co-author of a recent study for the City of Edmonton, exploring the perceptions and experiences of discrimination among its citizens. The city is using the survey findings to design educational and other programs to tackle the issue.

So that his students also discover how sociology plays into everyday life, Krahn takes a less traditional approach to teaching, encouraging discovery learning as they discuss questions that still need answers.

“I enjoy being able to link the research side with the teaching side of my profession and enhancing students’ experience, whether it’s at the undergraduate or graduate level. If we can take university education beyond just learning the material to pass the exams, to seeing the bigger picture and how it applies to them personally, that can carry over into all aspects of life.”

One of Krahn’s landmark courses, Sociology 366, was designed to teach engineering students about the people skills they’ll need during their highly technical careers. “All kinds of engineering projects come with cultural differences.”

Outside the classroom, Krahn has also managed to carve out time to act as an administrator for half of his three decades at the U of A, beginning in 1987 in various positions including associate dean of research and acting dean of the Faculty of Arts, director of the Population Research Laboratory and, most recently, chair in the Department of Sociology.

“I enjoyed learning about the diversity in different departments, and it was a pleasure to help other researchers and artists reach their own goals,” Krahn said of his time serving in the Faculty of Arts.

Krahn plans to stay involved in teaching; freed from administrative duties after many years, he’s taking on a full teaching load of undergraduate courses this fall, with the goal of helping students discover for themselves why sociology matters.

He’s proud to be this year’s recipient of the University Cup. “It’s an honour, and it recognizes what I value about the University of Alberta: that it encourages not just research, but also teaching and community service.”

Helping students see the world through a different lens
Newsroom