Helping the youngest stroke sufferers get a leg up 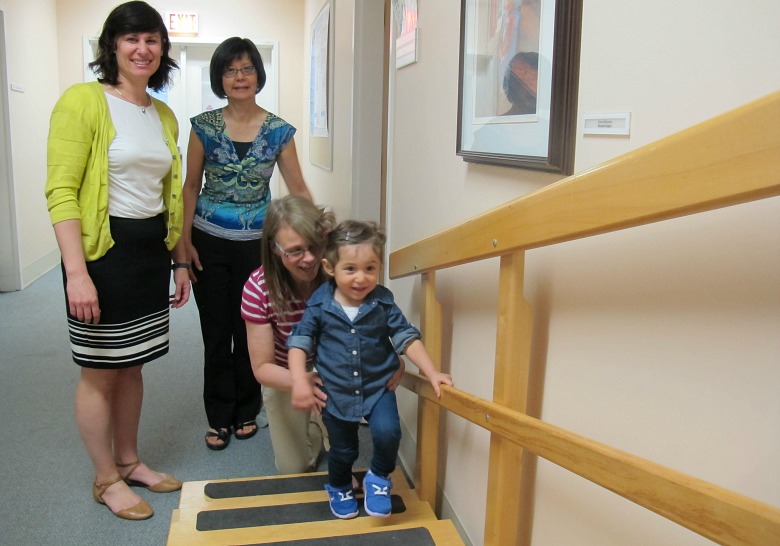 130509-perinatal-stroke-banner
(From left) Researchers Monica Gorassini and Jaynie Yang look on as Alesandra, a young participant in their pilot study, climbs stairs with help from her physiotherapist, Donna Livingstone.

(Edmonton) Toddlers who suffered a stroke as babies are learning how to walk thanks to research being conducted at the University of Alberta.

The research is led by Monica Gorassini and Jaynie Yang from the U of A’s Centre for Neuroscience. They hope to recruit 60 children for the study who have suffered perinatal stroke—meaning the stroke happened between 20 weeks’ gestation and 28 days after birth. The incidence of perinatal stroke in Canada is 1.2 for every 1,000 births.

The duo received $1.1 million in funding to launch a larger provincial study after seeing positive results from a small pilot study in which five children showed marked improvements in leg mobility and symmetry while walking.

A prime opportunity for early intervention?

Yang and Gorassini say they wanted to study children who experienced early brain injuries because children’s nervous systems are more mouldable. Their team members wondered whether there is a critical period for motor development for walking that would be more amenable to change. Previous research has shown that the protective coating of nerve cells, from the brain to the region of the spinal cord controlling the legs, doesn’t fully mature until a person is two years old. Knowing that, the team wanted to find out whether they could improve mobility in children who have brain injuries before that nerve-cell coating becomes mature.

“We thought maybe we have a chance to really make a difference in these children,” says Yang.

Gorassini’s role will be to test the children to see whether extra leg exercises from physical therapy are genuinely improving connections in the damaged side of the brain, and whether new pathways from the brain to the spinal cord are being created or restored. She will test the children before any physical therapy starts, and then after the intensive training, to see whether the connections are stronger.

“We want to try to induce regrowth of the damaged side of the brain and the tracts that are going from the brain to the spinal cord,” says Gorassini. “We want to see whether intense physical therapy intervention before the age of two produces better long-term outcomes for these kids, and a better quality of life for them and their families.

“Intensive physiotherapy at an early age is cheaper than surgery to lengthen tendons or Botox injections for the legs. This intervention could save a child from painful surgeries, and save the health-care system money.

“I see adults who have had perinatal stroke as an infant, and what I often see is large deformities in the feet, ankles and leg architecture because of a lifetime of disuse or favouring the other leg. This is what we want to prevent for these children.”

‘Early intervention and intensive physical therapy is what kids need’

Rhina Delgado’s daughter, Alesandra, took part in the pilot study. Rhina was impressed with the results and is continuing the physiotherapy at home with her daughter.

“I feel like the study has been one of the most beneficial things for Alesandra in terms of helping her develop normal skills and staying on par with her twin brother for her development,” says Rhina, an occupational therapist who works with adults who have had a stroke.

“This research is really important and demonstrates that early intervention and intensive physical therapy is what kids need. This type of therapy and intervention will give children like Alesandra the best outcome possible for their future."

The provincial study will occur at two centres—Corbett Hall on the U of A campus in Edmonton and a U of A physical therapy site in Calgary—and through Skype with Alberta families unable to come to either of the major centres. About 50 per cent of all children in Alberta who have suffered a perinatal stroke live outside Edmonton or Calgary. Physiotherapists will teach out-of-town families how to do the exercises with their children, then these physiotherapists will regularly check in with the families through Skype to see whether the parents are doing the exercises properly.

The randomized, controlled trial, which has already started at the Edmonton site, will see toddlers doing lower-limb training such as walking on a treadmill with support, kicking, splashing and stepping on steps. Physiotherapists will work with children between eight months and three years old. The team will follow all children involved in the study until four years of age, and hopefully longer, to see whether there are positive, long-term and sustained changes in their lower-limb mobility from the intensive physical therapy sessions. Some children will start the training immediately; others will wait three months after enrolment, so the research team can try to pinpoint how much improvement in lower-limb mobility can be attributed to getting stronger with age, versus getting stronger because of physical therapy.

From pilot to provincial study

The larger study is building on work the team completed with a small group of just five children, which demonstrated marked improvements in the children’s use of the legs that had been impaired by stroke. After a few months of training four times a week for an hour with a physiotherapist each session, the toddlers gained more symmetrical use of their legs—and some even showed use similar to that of a child who had not had a stroke. The team wants to see whether they can repeat these results in the larger study. All children who experience perinatal stroke to one side of the brain learn to walk, but more advanced use of their legs may not be a reality for them.

If the larger study demonstrates similar findings to the pilot study, the research team will embark on provincewide in-services to share their findings and to encourage a new standard of care for those who suffer perinatal stroke—early, intense physical therapy. They will also expand the study to children with damage to both sides of the brain, to determine whether early intensive training can help children who would normally be confined to wheelchairs learn to walk.

The results from the first, small study were shared with researchers at a conference in Edmonton, and at a conference in Puerto Rico in April. That study was funded by the Women and Children’s Health Research Institute and the Provost’s Office from the U of A. The larger provincial study is being funded by Alberta Innovates – Health Solutions and the Canadian Institutes of Health Research for three years.

Helping the youngest stroke sufferers get a leg up