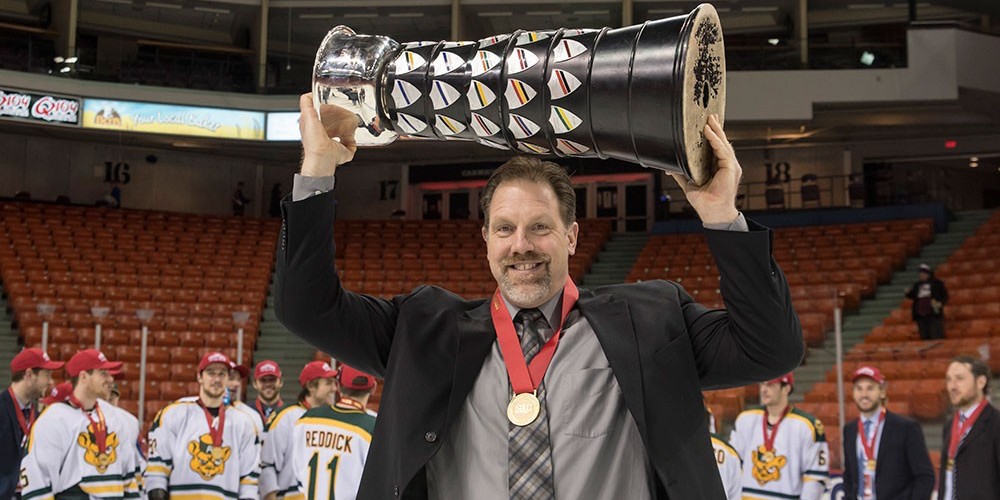 Golden Bears hockey coach Ian Herbers is taking on the role of assistant coach with the Edmonton Oilers.

(Edmonton) Coming off a second consecutive championship season as head coach of the University of Alberta Golden Bears hockey team, Ian Herbers has accepted an offer to join the National Hockey League as an assistant coach with the Edmonton Oilers.

The Jasper, Alberta-born Herbers coached the Golden Bears for three seasons, racking up an astonishing 72–12 regular season record (.857), as well as a sterling 20–2 (.909) playoff record. In three years behind the bench, Herbers suffered only 19 total losses including regular season, playoffs and non-conference games. His teams captured three Canada West conference championships and two CIS national championship trophies, and the Bears were routinely a top three program in the nation in goals for, fewest goals against, power-play percentage, shots on goal, penalty killing and short-handed goals.

“I want to thank Stan Marple, Ian Reade and U of A Athletics for the opportunity to coach the Golden Bears hockey program,” said Herbers. “It has been a fantastic three years working with some great student-athletes, hockey staff and U of A faculty members. All of those people, combined with the strong support of the alumni, have helped lift the Golden Bears hockey program to the best program in the country, and have helped me reach the NHL as a player and now as a coach.

"Together we have established a new standard for the program, which has allowed me to join the Edmonton Oilers coaching staff secure in the knowledge that the program is going in the right direction. I also want to thank all our fans, supporters and sponsors who made going to the Clare Drake arena an exciting evening, and a tough place to play for the opposition!”

Herbers was awarded the Canada West Coach of the Year award in his rookie season (2013), and now he joins the Oilers where he’ll be reunited with Edmonton head coach Todd McLellan. McLellan coached Herbers during the 2000–01 season when the latter was a defenceman for the Cleveland Lumberjacks in the now defunct International Hockey League.

Herbers also just completed a tour of duty with Hockey Canada, where he served as a coach on Canada’s team that captured bronze in April at the IIHF Ice Hockey U18 World Championship in Zug and Lucerne, Switzerland.

Herbers, who holds a bachelor of physical education degree with distinction, played four seasons with the Golden Bears beginning with the 1988–89 season and culminating in 1992 with a national championship. He also collected a Calder Cup championship (1993) and a Turner Cup championship (IHL) in a pro playing career that spanned over a decade including NHL stops in Edmonton and Tampa Bay, and with the New York Islanders. He immediately moved into the coaching ranks as an assistant in San Antonio (AHL) and with the OHL’s Saginaw Spirit. He got his first head coaching job with the Johnstown Chiefs of the ECHL in 2007, where he also served as general manager. He then joined the Milwaukee Admirals as an assistant in 2009 and was appointed head coach in 2011, amassing a 30–23–0 record.

"I knew when we hired Ian that we were getting the best possible candidate for the position, and Ian's coaching record while he was here speaks for itself,” said Golden Bears general manager Stan Marple. “Ian and I have been close friends for over 25 years. I am very happy for him and I applaud the Oilers for recognizing his talents and asking him to join their already experienced and successful coaching staff. He will be a great addition to the Oilers.”

Marple added, “I’d thank Ian for all his help in bringing the program back to where it belongs on the ice as national champions, and off the ice with our development of our players both academically and athletically. Golden Bears hockey is currently exploring options for the best head coaching candidate available, and we are hopeful to have a new head coach in place as soon as possible."