What you have available to you in terms of the technologies that are now available, what you’ve learned about, how you can apply them, is absolutely remarkable. The future is indeed yours. 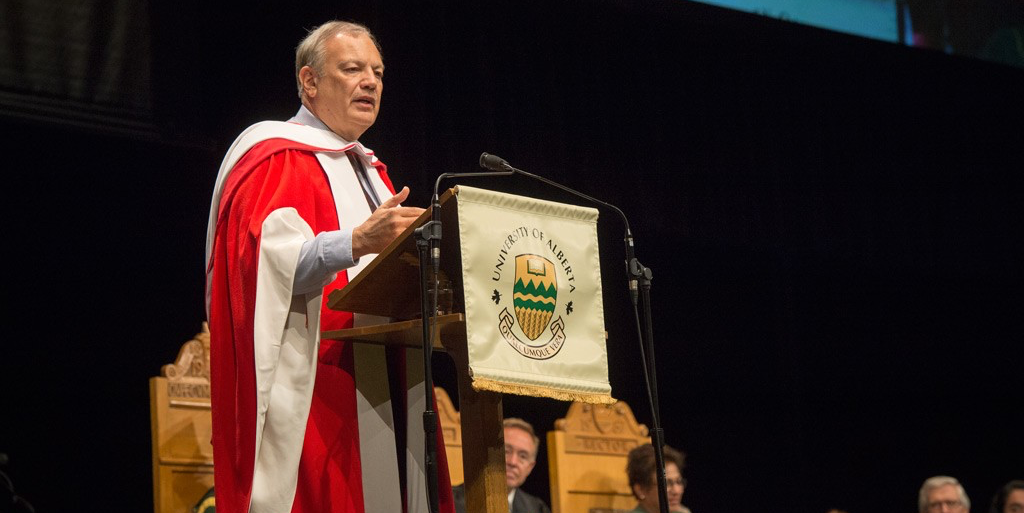 (Edmonton) When Dennis Slamon became a fellow in the Division of Hematology/Oncology at the University of California, Los Angeles, he was struck by the fact that breast cancer patients were treated by slight variations on a “one size fits all” approach.

“The outcomes were frequently dramatically different, some women doing incredibly well, others doing very poorly, unfortunately,” recalled Slamon, addressing the 2015 graduates of the University of Alberta faculties of medicine and dentistry, rehabilitation medicine and public health at the Northern Alberta Jubilee Auditorium June 5. “What we did was try to modify the cocktails we were using for treatment, we tried to intensify the drugs that we used in treatment and, sadly, what we often did was more harm than good, which is the absolute antithesis of what we are supposed to do as physicians.

“At that point it became clear that we should be doing something different.”

Slamon says some of the pioneering work he did in the mid-’80s was inspired by a story of a farmer who lived on a flood plain in the Tennessee Valley. During one particularly bad flood, a civil defence worker came by in a boat and told the farmer, a devoutly religious man, that the area was being evacuated. The farmer responded that he wasn’t going anywhere and that “the Lord is going to take care of me.” With the water rising, another boat came by, followed by a helicopter a few hours after that, when the water was up to the farmer’s neck. But each time, he gave the same response.

Unfortunately for the farmer, he drowned shortly thereafter. Upon meeting his maker in Heaven, the farmer let the Lord know he was a little disappointed that he didn’t get any divine intervention during the flood. The Lord looked upon the farmer and said, “What do you want, you jackass, I sent two boats and a helicopter.”

Indeed there were. In 1987, he observed that up to a quarter of women diagnosed with breast cancer actually had a mistake made in their genome when “the Xerox machine was copying the blueprint. It was not an inherited genetic alteration, it was an acquired genetic alteration.”

It was, and the rest is marvellous, life-saving history.

Slamon’s research resulted in antibody therapy, the first molecularly targeted therapy for breast cancer. Used in combination chemotherapy, Herceptin reduced cancer deaths by 37 per cent. The intravenously administered medication was approved by the FDA in 1998, and within 10 years, it had been used to treat 420,000 women worldwide.

“[The therapy] took that group of women, which is about 20 to 25 per cent of the 1.5 million breast cancers each year, from having the worst outcome for breast cancer, and now they have the best outcome for human breast cancer,” said Slamon, who received an honorary doctor of science degree from the U of A in honour of his work. “That was something we can all feel good about.”

Slamon acknowledged that the work was not his alone, taking time to thank colleagues from the world-renowned Translational Research in Oncology (TRIO), which began at the U of A, and from the Cross Cancer Institute. He also acknowledged the women who participated in the earliest clinical trials

“They were not research subjects, they were not patients, they were colleagues. They had a bigger dog in this fight than any of us had, but they gave up themselves and what time they had left to help others.”

Slamon went on to tell his audience of future health professionals that he shares in their excitement, but confessed that he also feels a bit of envy.

“I’ve had a very good run and I’d like to think I have a couple more dances left in me. However, what you have available to you in terms of the technologies that are now available, what you’ve learned about, how you can apply them, is absolutely remarkable. The future is indeed yours. Seize it—and don’t forget the boats and the helicopters.”