Hey Countess! a Fringe masterpiece in the French Quarter

Author and Arts alumnus Todd Babiak goes off the beaten trail at the Fringe Fest for a longtime favourite. 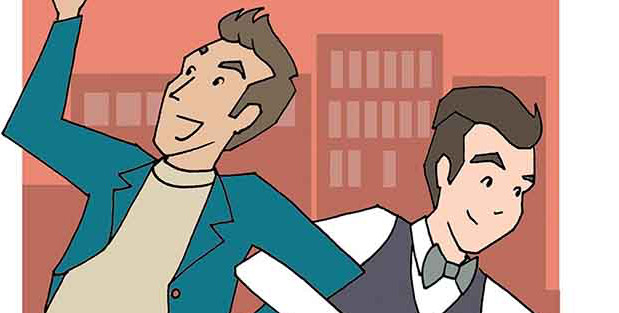 The Edmonton Fringe has to be the fringe of something. In 1982, Old Strathcona was the fringe of safe and prosperous. Theatre was a downtown affair. You dressed up for it. In the first fringe show I ever saw, as a teenager, there was full-frontal nudity and two men kissed. I remember everything about that night.

Now, the Fringe doesn’t always feel fringe-y. There is a familiarity about the confessional solo shows and the stand-up acts. For some people, going to the Fringe has almost nothing to do with theatre. They buy street food and watch acrobats.

This year, the fringe of the Edmonton Fringe was in the French Quarter—in theatres on the east side of the Mill Creek Ravine. The beer tent was Café Bicyclette and the comfortable courtyard of La Cité Francophone. They served Alley Kat instead of Big Rock, and good French wine.

There have been off-Fringe clusters before, downtown and on Alberta Avenue and even in the French Quarter. But it has never quite worked before. This year it does. A lot of smart people in the French Quarter made this happen, but it also helps that together we’re rebuilding the birthplace of the Fringe—the Varscona Theatre. (If you contribute to the new building, you can win a chance to hang out with Nathan Fillion in Los Angeles.)

Teatro la Quindicina, best known for its principal playwright and director Stewart Lemoine, moved its Fringe machine to the French Quarter. His audience and friends came with him. Some of the finest local and visiting artists are camping out in BYOVs on the east side of Mill Creek Ravine.

Hey Countess!, one of Lemoine’s most satisfying plays, is playing at Campus Saint-Jean. Nick, played by Andrew MacDonald-Smith, is in the midst of a marital crisis, a career crisis and—most importantly—an aesthetic crisis. He has just seen an Italian art-house movie, savagely dubbed into English, and he wants answers. Not simple answers, the sort that might lead to justice and retribution. Or at least a refund. He wants spiritual answers, and he finds a sidekick named Sam (Mathew Hulshof) to go off and discover them.

They meet women along the way, played by Davina Stewart, and Cheryl Jameson, who engage in typically Lemoinian dialogue and drama with Nick and Sam. By typically Lemoinian I mean fluent, careful, crispy and clever. The Lemoine world is a fantasy place where everyone is articulate and thoughtful, curious and willing to learn a thing or two, if not help.

Lemoine has been a part of the Fringe since the beginning, so in a sense no one is less fringe-y. But the worlds he creates are so not-like-our-own, so fine and well planned, that we’re devastated when the lights come on and someone says the word “like” superfluously and someone else turns on an iPhone. A Lemoine play is a microcosm of the Fringe itself—Edmonton at its best—and we know we’re silly for wishing it will never end but we wish it anyway.

This story also appears in the WOA Blog.

Hey Countess! a Fringe masterpiece in the French Quarter