High school students work to stop cyberbullying before it starts

I believe that when given the choice, people will choose not to bully. The Sentiment Keyboard gives them that choice.

“If you know what you were about to say would send someone to bed in tears, would you still post it—just to get a couple likes?” 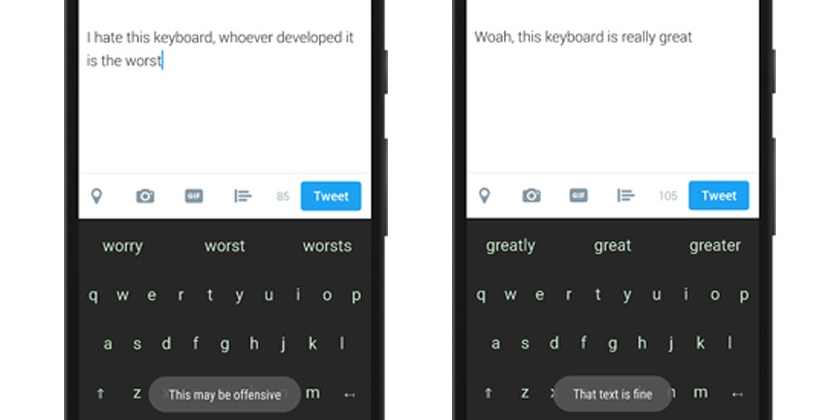 Edmonton high-school students Jacob Reckhard, Christopher West, and Ibrahim Elmallah are no strangers to the troubling and pervasive issue of cyberbullying. From apps like Yik Yak to anonymous posts on social media, examples of bullying in the digital world are everywhere.

“During our initial research, we came across some very startling statistics about the prevalence and growth of cyberbullying,” explains West, grade 12 student. “And it is inevitable that through the way society is changing, the problem is only going to get worse.”

Under the supervision of Denilson Barbosa, associate professor of computing science at the University of Alberta, the students decided to tackle cyberbullying head on.

During the summer months of 2016, the group developed the Sentiment Keyboard, a custom keyboard for Android devices that checks whether text expresses negative sentiment.

“There are many tools that detect cyberbullying by monitoring social media activity of the users, analyzing what they post, and what others post about them,” explains Barbosa, expert in text analytics. “While these tools work, they do not prevent the posting of offensive material in the first place.”

The Sentiment Keyboard does just that.

Jacob Reckhard, now a computer engineering student at the University of Alberta and one of the student developers on the Sentiment Keyboard project explains that the key is adding a layer of awareness to encourage the user to make the best decision without outright preventing their actions. In doing so, the keyboard acts as a deterrent, increasing the awareness of users that their message can be interpreted as negative.

“If you know what you were about to say would send someone to bed in tears, would you still post it—just to get a couple likes?” explains Reckhard. “By informing users how offensive their messages may be, they may choose not to continue. I believe that when given the choice, people will choose not to bully. The Sentiment Keyboard gives them that choice.”

“The research we came across shows that even a slight barrier like this can drastically reduce the number of hateful message sent,” adds West. “By adding a buffer, the user takes a moment to consider their message before they hit send.”

“I would like to develop a way of telling the user which parts of the text are negative and suggesting alternative phrasing. That way, they can understand why the text is negative and how they can make positive changes.”

As for the students, the Sentiment Keyboard project has affirmed their interest in pursuing computing sciences in the undergraduate and graduate careers.

“Doing this project over the summer made me realize that research can be enjoyable and rewarding. When I am finished my undergrad degree, I think I’d like to pursue a Masters or a PhD in computing sciences,” says Reckhard.

This project was funded through the Ross and Verna Tate High School Internship Program, an initiative designed to give high school students an early look at what life is like in the computing sciences.