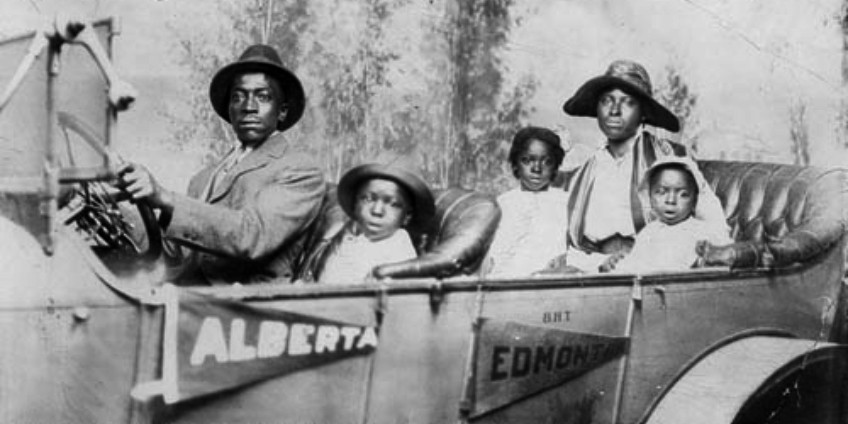 A new book by U of A cultural studies professor Russell Cobb delves into the story of black immigrants who came to Alberta in the early 1900s seeking "the last, best West"—and the racist backlash they faced. (Photo: Glenbow Archives NA-4210-1)

One day in 1911, 194 men, women and children from Oklahoma stepped off a train in Edmonton, hoping they had finally reached the promised land.

Within a matter of weeks, a quarter of the city would sign an Edmonton Board of Trade petition to discourage more African-Americans from homesteading. That was followed by an Order-in-Council signed by Prime Minister Wilfrid Laurier, prohibiting black pioneers as “unsuitable to the climate and requirements of Canada.”

Alberta’s history and culture intersects with Oklahoma in many ways, not all pretty, says Russell Cobb, a self-described “Okie” and University of Alberta professor of Spanish and Latin American studies.

“So many people signed that petition,” said Cobb, who also pointed to later segregation of Alberta theatres and swimming pools, in addition to local Klu Klux Klan chapters. “In a lot of ways, they tried to import notions of segregation from the States.”

Cobb was back in his home state last week to promote his forthcoming book, The Great Oklahoma Swindle, which hits shelves next month. An exploration of what Cobb dubs “America’s weirdest state,” the book includes a detour into a fascinating story about the African-American population that immigrated to Alberta.

The Black One Thousand

It was fluke that led Russell to “the Black One Thousand”—a former scaremongering term now used by descendants—who came to Alberta between 1908 and 1911 to find “the last, best West.”

Cobb was listening to an afternoon radio show in Edmonton when he heard the Black Pioneer Heritage Singers, a Canadian gospel group that traces its roots to Oklahoma immigrants. He contacted the group to learn their story, and soon began to dig further into archival research.

Decades before it became a state in 1907, Oklahoma was marketed to former slaves as a fresh start with cheap land. Encouraged by pamphleteers, at least 50 all-black communities popped up across the state. The promise of economic and social progress quickly soured, however, when the state’s first pieces of legislation brought in Jim Crow laws common across the Old South.

In many black towns, news arrived that Western Canada had ample land for anyone willing to clear and improve it. Canadian immigration agents actively recruited Oklahomans. Some reports stated that Canada was actually warmer than Oklahoma, while others noted that it wasn’t as hostile to blacks.

A man named Henry Sneed took a train from Tulsa to Winnipeg to Edmonton, returning several times, among the group of nearly 200 settlers who sold their houses and farms to move up north in 1911. Other groups would try to follow.

Once in Canada, black communities founded south of the border were replicated in the Prairies. One named Clearview took its name from an Oklahoma community. Another settlement near Athabasca, Amber Valley, has garnered attention as the home for nearly 300 settlers.

“On the surface, Alberta and Oklahoma just seemed like such different places, the context would be so much different,” said Cobb. “They were persecuted in Oklahoma when it became a state, so they relocated the towns up here. I thought that was really, really interesting.”

As more black Oklahomans looked to come to Canada, organized opposition began to emerge. Other groups of migrants were stopped at the border, while Cobb says there was pressure on the federal government to impose a head tax. The Edmonton petition of 1911 denounced the trend of black immigration as “alarming” and a “serious menace to the future welfare” of the province. The Canadian government agreed, hiring agents to discourage immigrants from attempting to cross the border. The trend stopped before it truly started.

Over time, hardscrabble pioneer life gave way to migration to urban centres for new opportunities. Amber Valley has dwindled to a few weathered ruins and a memory for its descendents.

One of the ironies of the black homesteading communities in Canada is that they missed the later civil rights struggle experienced by their southern neighbours, Cobb says, because the Prairies didn’t experience the same kind of reckoning with its history.

“In Canada, there’s a greater emphasis put on getting along, not making a fuss,” Cobb said. “In the U.S., there’s a long history of civil rights struggle: when something happens, people will be ready to denounce it and call it out.”

From Cushing to Hardisty

When Cobb arrived in Alberta nearly a decade ago, he said he felt a bit off kilter living in such a northern metropolis that he jokingly refers to as the “northernmost edge of the civilized world.”

But the connections between Alberta and Oklahoma have continued to surprise him. At a family reunion, he was shocked to learn that a cousin in the oil and gas sector regularly commutes to Calgary. The Keystone Pipeline? It links Hardisty, Alberta, and Cushing, Oklahoma, not far from where Cobb grew up.

“People say Alberta is the Texas of Canada, but its real twin is Oklahoma,” Cobb said. “There’s the same combination of very difficult relationships between white settlers and Indigenous people, the discovery of oil, and a suspicion of the federal government.”

Beyond other obvious connections with cowboy culture and old-time religion, Cobb points to an amnesia about history, which can actually hinder the recognition of racism around us.

“I don’t think it’s so simple to say that Alberta is more racist than Oklahoma or Texas,” Cobb said. “But things happen here that would elicit howls of protest if they happened in the States.”

Having researched the history of the Black One Thousand, Cobb says these strands of history can challenge national differences while opening our eyes to the new Canadians still arriving, hoping that this is finally the promised land.

“You meet this random assortment of people who experienced political or economic hardship somewhere in the world, and just ended up here,” said Cobb. “Alberta was an opportunity for me, too.”