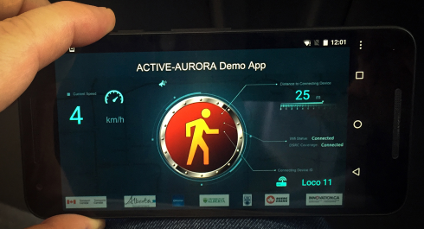 A demonstration of the ACTIVE-AURORA signals a warning to a driver that a pedestrian is in the vicinity.
“

Ideally, the only thing you should be doing in a vehicle is eyes on the road, hands on the wheel. Anything other than that constitutes a distraction.

Hit the brakes on distracted driving … in the courtroom?

New technologies aim to make our cars and roads safer. But do they? And is it time to consider criminal charges and lawsuits to reduce distracted driving? 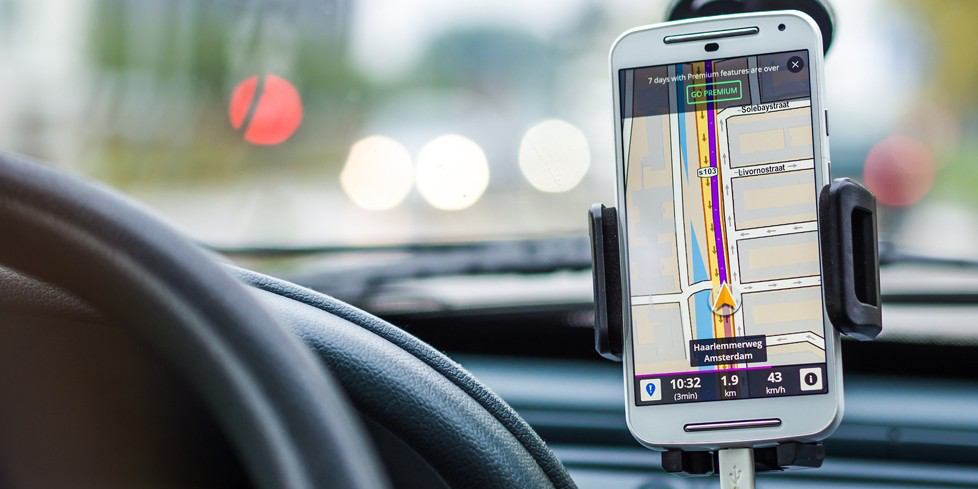 Hands-free technology is becoming more commonplace in vehicles, sometimes at the risk of driver distraction and road safety.

When an Edmonton transit bus pulled away from the curb at the University of Alberta earlier this month, the team of students, engineers and government officials seated inside readied themselves for a journey toward safer, less congested streets.

Just minutes into the ride, a computerized voice warned about a pedestrian at a nearby crosswalk, signalling the bus driver to be defensive. A few minutes later, the same voice cautioned against tailgating and, soon afterward, about a high-collision intersection. Every passenger on the bus received the same warning on their smartphone, a demonstration of the potential of the ACTIVE-AURORA project and the not-so-distant future of vehicle safety.

“This technology is going to revolutionize the way we think and move. It will allow vehicles to be able to communicate information to each other and talk to the infrastructure,” says Karim El-Basyouny, a civil engineering professor and member of the project team.

Cars already come pre-loaded with technology that functions like a laptop or tablet, with GPS display screens and Bluetooth for hands-free cellphone use, says Tony Qiu, director of the U of A’s Centre for Smart Transportation. Much like technology revolutionized cellphones over the past 15 years, cars could soon become equipped with mobile data modules that connect to apps and allow vehicle-to-vehicle communication, as well as communication with roadside technology aimed at making streets safer, he adds.

The bus demonstration last week was ACTIVE-AURORA’s coming-out party, and followed the debut of another U of A partnership with the city—the SmartTravel app. Once installed on a smartphone, the app runs in the background and only activates with a verbal warning when a driver is entering a high-collision location, a school zone or other area with a change to the posted limit.

On the day of its launch, 1,400 people downloaded SmartTravel—once again proving the demand for safe-driving technology, says Qiu.

But are safe-driving apps really necessary?

Whether mobile apps—even hands-free versions—make roads safer is still a matter of debate. Unlike talking on a hands-free cellphone, which research shows is a dangerous distraction, both Qiu and U of A public health professor Louis Hugo Francescutti say there is no strong evidence that apps running in the background cause driver distractions.

Francescutti, a vocal advocate for tougher driving legislation, understands what Qiu’s team is trying to accomplish with SmartTravel but also points out the obvious: if you need an app to remind you to slow down when entering a school zone, you’re not paying attention.

“Losing (a class-action lawsuit) does a couple of important things: it makes it far more public and it starts to shift the dialogue around responsibility for this kind of behaviour,” says Jacob Shelley.

“Maybe the time has come to have that conversation.”

The Edmonton-based emergency department physician and former head of the Canadian Medical Association also sees value in using the courts, through civil litigation, to change behaviour.

Francescutti would like to see class-action lawsuits that target three groups—government for passing “faulty legislation” that still allows talking on a hands-free device while driving; auto manufacturers for designing cars that incorporate distracting technology that’s too tempting to ignore; and cellphone carriers for not installing technology in phones that shuts them off once a vehicle travels a certain speed.

“Sometimes what you have to have is class-action lawsuits to bring attention to the issue,” he says.

Two legal experts contacted about Francescutti’s suggestions both say suing government for failing to pass tougher legislation is a non-starter because those policy decisions don’t fall within tort law. Suing auto manufacturers or cellphone carriers is slightly more feasible but also likely doomed to fail, contends Lewis Klar, a professor emeritus with the U of A’s Faculty of Law.

Klar says it’s one thing to sue a manufacturer for designing products with obvious defects, like a cellphone that catches fire, but it’s something else entirely to sue an automaker for equipping vehicles with technology that “reasonable people” know they shouldn’t be using while behind the wheel. Even if they don’t, manufacturers use product warnings to cover any liability.

“If you have a GPS, it says do not use while you’re driving. I don’t think you could say cars that have GPS or other technology are defectively designed or negligently manufactured,” he says.

Similarly, Klar doesn’t see room for success in lawsuits against cellphone carriers, which he says would likely get thrown out before trial. U of A law alumnus Jacob Shelley agrees, but says there could be a slight benefit from a class-action suit, even if unsuccessful.

Shelley, now an assistant professor at Western University, studies product liability laws that require food manufacturers to warn consumers about possible dangers with their products. In this arena, he’s realistic that most clients are going to lose, but says “we need people to lose.”

A class-action suit would also force companies like cellphone carriers to disclose any information they might have about safe-driving technology, Shelley added. That’s essentially what happened with tobacco lawsuits—plaintiffs almost always lost but it forced companies to disclose documents about what they knew and when. That information eventually led to courtroom successes.

But Shelley concedes that while class-action lawsuits are theoretically possible, the odds are stacked given costs associated with lawsuits and standards of evidence of proof. This type of approach is also contentious in the legal community but one he thinks there’s room to explore.

“We do need to think more carefully about how we can use private law, how we can use lawsuits to force discussions around liability for manufacturers or safety standards. That’s an important tool that’s not really discussed.”

One action that both legal and public health experts agree is needed is better enforcement of existing laws.

Francescutti says distracted driving simply isn’t a high priority for law enforcement agencies. Canada would do well to follow the lead of a country like Sweden, which passed legislation nearly 20 years ago to eliminate motor vehicle collision fatalities by 2050—a strategy backed with 24/7 enforcement and other safety measures. Sweden now has among the fewest road fatalities in Europe—three out of every 100,000—compared with 5.2 per 100,000 in Canada.

Will efforts like safe-driving apps help? It’s possible, Francescutti adds, though with the first generation of apps these are early days.

“At least we’re trying to do something about it. The problem is so big compared to how Sweden has tackled the issue, we still have a long way to go before our roadways are safe.”

— With files from Aalyssa Atley

Hit the brakes on distracted driving … in the courtroom?
Newsroom