Hundreds gather to celebrate the life and profound influence of "the coaches' coach.” 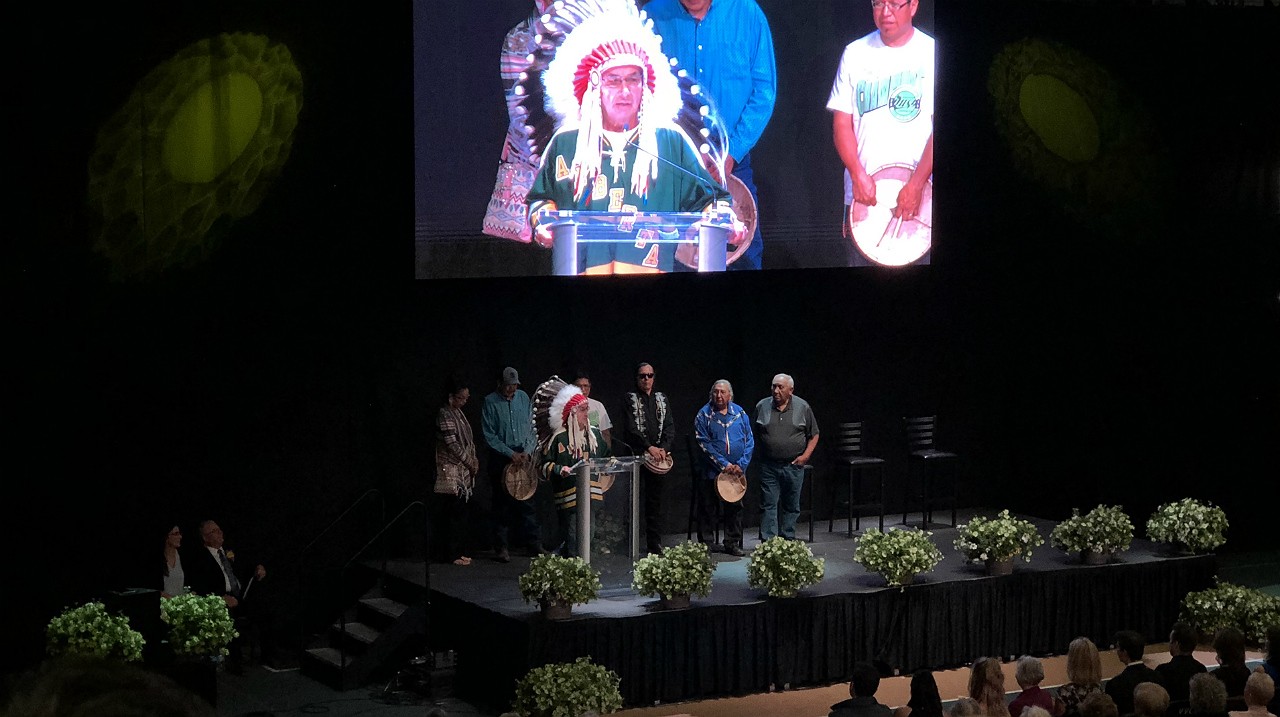 Chief Wilton Littlechild, who played for the U of A Golden Bears under Clare Drake in the 1960s, was among several friends, former players and coaches who shared heartfelt and humorous stories at the celebration of Drake's life held today. (Photo: Tim Schneider)

Nearly 800 family, friends and admirers of the late Clare Drake gathered Thursday to celebrate the life of one of the University of Alberta’s most fabled personalities, Canadian hockey’s greatest teacher and the best friend and family man anyone could ask for.

Drake, who died May 13 at the age of 89, coached the U of A Golden Bears hockey team for 28 seasons, starting in 1958. Over the ensuing three decades, the Yorkton, Sask. native led the Golden Bears to an unmatched six national championships.

And while he is the architect of a Golden Bears hockey program that is unmatched, Drake’s coaching DNA can be traced to every coach’s practice plan in Canada, if not the world. It was that influence that landed the U of A’s “coaches’ coach” in the Hockey Hall of Fame in 2017 as the only career university coach to earn the honour.

The emotional farewell opened with an honour song performed by a group of Cree Elders led by U of A alumnus Chief Willie Littlechild.

Littlechild, who played for Drake in the ’60s and credits him for staying in school, kicked off the story-filled afternoon with a quick tale about Drake’s penchant for losing his keys.

It got so bad that Drake started wearing them on a lanyard around his neck.

“One day he comes up to me and says, ‘Willie, have you seen my keys?’”

“I said, ‘they’re around your neck, Coach,’” laughed Littlechild. “But the one key he never lost was the key to winning in life.”

Drake’s longtime assistant coach and good friend Billy Moores, who himself coached the Golden Bears to a championship in 1992, talked about Drake’s belief that a winning culture was based on caring and sharing.

“It was about team, it was about effort and correct execution,” said Moores. “It was all made possible by his core values, which included a strong work ethic, a passion or enthusiasm for what you’re doing and, above all, you had to co-operate first, compete second.”

Moores quoted another Canadian coaching legend in concluding his heartfelt remarks. “The ripple effect of Clare’s life’s work has grown into a tsunami.”

Longtime local sports reporter Jim Matheson, who remarked that Drake was the most humble person he ever met, took to the stage to moderate a foursome of former Drake charges: Dave Otto, an orthopedic surgeon who played for Drake from 1983-88; Howie Draper, head coach of the Pandas hockey team, who laced ‘em up for Drake from 1985-89; Brian Middleton, a Golden Bear from 1973-75; and Darrell Zaperniuk, who was coached by Drake from 1975-79.

The group reminisced about championships and practices, Drake the teacher, Drake the coach, the Golden Bears way and how Drake made them into men.

“Coach Drake made us winners in the game of life,” said a teary Zaperniuk, who was actually cut by Drake as a veteran before being brought back into the fold a couple of weeks later.

“After my mom and dad, I can say that Coach Drake was the most influential person in my life,” he said.

Draper, who has led the Pandas hockey team to eight national championships in his 21 years at the helm, talked about how, despite his lack of coaching experience early on, once hockey people knew he had been coached by Drake, it was implied that he was a good coach as well.

“I didn’t know the effect Coach Drake had on me until I was gone.”

The attendees were then shown a short video made up of clips from Drake’s life, including 1967, when he became the only Canadian interuniversity coach to lead both hockey and football teams to championships in the same year.

Tom Renney, CEO of Hockey Canada and former head coach of the Edmonton Oilers, used his time at the podium to talk about Drake’s involvement in the national program.

Renney credited Drake for his role in Canada’s surprise silver medal in men’s hockey at the 1994 Winter Olympics in Lillehammer, but remembers, above all, Drake’s authenticity.

“What he had more of than anyone I have known, before or since, was humanity,” said Renney. “When you have humanity and humility, and all the other attributes—passion and hard work and all that—then you have someone who is going to impact the world for years to come.”

Longtime NHL head coach and devoted Drake disciple Ken Hitchcock was next, and used his time to talk about how Drake single-handedly elevated the coaching profession and introduced the concept of sharing to hockey.

“He always said the more you share, the more you learn,” said Hitchcock, who as a minor hockey coach in Sherwood Park in the early ’80s, would sit in the stands during Golden Bears practices, gleaning what he could from the master. “We never understood that and it’s something the coaching fraternity wouldn’t adopt for years . . . the more you give, the more you get back in spades.”

Hitchcock recounted his own time as head coach of the late-’90s talent-laden Dallas Stars that he couldn’t quite push over the top.

He said a loss to the Edmonton Oilers in the 1997 playoffs prompted a call to Coach Drake.

“I leaned on Clare hard over those years,” said Hitchcock, who with Drake’s help would win the Stanley Cup in 1999. “We (as coaches) can’t thank Clare enough for what he did for us.

“It meant everything for us that Clare went into the Hall of Fame.”

Drake’s daughter Jami spoke last on behalf of the family, and noted the importance of her father was not lost on her, her mother Dolly and her sister Debbie.

“We were grateful to be able to share Dad’s almost 90-year journey. We love you, Dad.”