TRC Commissioner Marie Wilson has a message for universities. 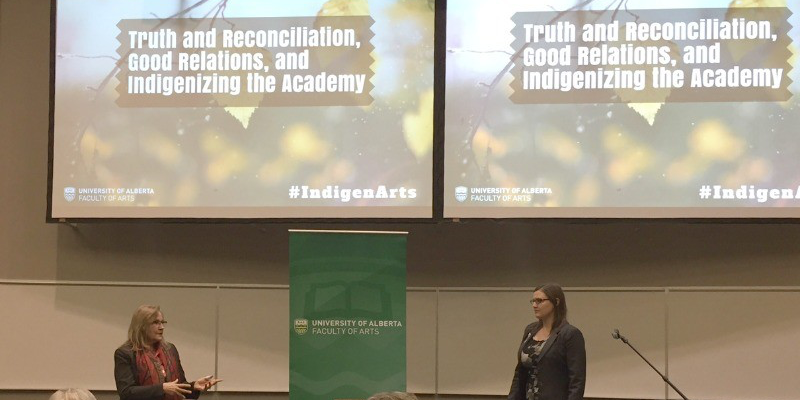 Marie Wilson, recent Order of Canada appointee and one of three Commissioners of the Truth and Reconciliation Commission, spoke to an emotional audience on Wednesday night about her six and a half years on the TRC, where she was witness to the testimony of more than 7,000 former residential school students.

Their stories of abuse and familial separation reveal a century of systematic, state-sanctioned cultural genocide, and as Wilson notes, it was carried out on children.

“When I hear those voices,” she says, “I hear them as the children of yesterday, but still in our midst today.”

Wilson was speaking as part of a Faculty of Arts event, “Truth and Reconciliation, Good Relations, and Indigenizing the Academy,” a three-day event to launch an ongoing series of activities designed to encourage members of the faculty to engage with and enact the TRC’s Calls to Actions through pedagogy, practice and the meaningful inclusion of Indigenous peoples as students and scholars.

Wilson was chosen out of 450 applicants for the commission because of her remarkable 35 year career as a journalist, giving a voice and a platform to marginalized communities. After graduating with a degree in BA in French, Wilson travelled to what is now Burkina Faso, an impoverished francophone country in Africa. As a witness to the civil unrest and to foreign media coverage that she perceived as unfairly focused on politics rather people, Wilson made the decision to become a journalist, obtaining her MA in journalism from the University of Western Ontario.

For most of her journalistic career, Wilson reported on issues pertaining to northern Indigenous communities. As a regional director of CBC North, she launched Canada’s first northern daily television news services — CBC’s Northbeat (in English) and CBC Igalaaq (in Inuktitut), and later served as an associate board member of what would become APTN, the Aboriginal Peoples Television Network.

Wilson continued to amplify Indigenous voices in Canada through the development of the Arctic Winter Games and CBC’s True North Concert series. Throughout these ventures, she also fought to recruit Aboriginal reporters, hosts and staff.

In her lecture, Wilson addressed universities directly, stating that they are in the “thought, analysis and reflection business,” and as such, should strive to live in the “spirit of reconciliation.”

“[UAlberta is] a world-recognized centre of research excellence, knowledge and expert analysis. Speak up and hold us to account in living up to the greater country I believe we can become. We must do old things in new ways, so that the outcomes can start to be different.”

According to Dean Lesley Cormack, Wilson’s keynote lecture marks the beginning of a larger Faculty of Arts’ commitment to “walking the path of reconciliation.” This week’s event is the first of these initiatives, aiming to broaden our understanding of the TRC findings, while at the same time, laying the groundwork for an Indigenized future for the faculty.

These initiatives will be part of a transformative process that goes beyond the inclusion of Aboriginal content into the curriculum to a deeper and more meaningful program of Indigenous research, teaching & learning, community engagement, language revitalization and the creation of Indigenous student spaces.

Anthropologist Kisha Supernant, who specializes in Métis archeology, envisions a learning environment where “Indigenous knowledges are interwoven throughout, producing Indigenous and non-Indigenous scholars who will face local, national and global challenges by bringing together many different ways of knowing to create novel, sustainable solutions for a more just, more equitable and more kind future.”

Marie Wilson concluded her lecture with a simple request to all participants, and indeed, to all of Canada: that they read the Truth and Reconciliation Commission of Canada’s Calls to Action.

“It’s a minimum gesture — to keep your eyes, minds and hearts focused on the honest facts of reconciliation.”

The Faculty of Arts Truth and Reconciliation, Good Relations and Indigenizing the Academy program continues with a public screening of Journey Towards Reconciliation on October 20.

On October 21, the faculty will host a series of informational panel discussions for Arts faculty, staff and students, as well as a lecture by Robert Nichols (University of Minnesota) on “Stolen Land: The Recursive Logic of Colonial Dispossession.”

The faculty will also open its new Aboriginal Gathering Space on Wednesday, October 26 in 4-65 Humanities. All are invited to the open house from 12-4 p.m.

The Faculty of Arts respectfully acknowledges that we are located on Treaty 6 territory, traditional lands of First Nations and Métis people.