Holding on to hope 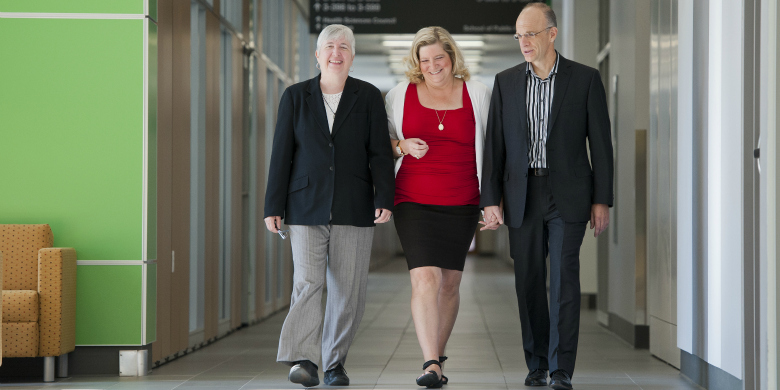 (Edmonton) Male partners of breast cancer patients are likely to take a pass on spousal support groups in favour of exercise or an evening out with friends to cope with stresses associated with the disease, according to new research from the University of Alberta.

Faculty of Nursing professor Wendy Duggleby said spouses of women with breast cancer have unique needs when it comes to retaining a sense of hope at a time when they provide important physical and emotional support for their partners.

“There are many programs out there for women, but for men a lot of support mechanisms are support groups, and it was very clear from the participants in our study that’s not what they wanted,” said Duggleby, Endowed Nursing Research Chair in Aging and Quality of Life.

“What these spouses needed was help finding ways to do things for themselves to help reduce their stress.”

The study, published in this month’s Oncology Nursing Forum, is the first to look at the hope experience of male spouses of breast cancer patients, said Duggleby. Ensuring men have a sense of hope not only helps decrease their risk for depression, it helps their partners, too.

“If their husbands lose hope, the wives are really, really worried about them and they often lose hope themselves. For women with breast cancer, it actually helps with their own quality of life if we can do something to help the men. It’s very interconnected.”

In the study, men in Edmonton and Saskatoon were surveyed about hope and their ability to cope with their spouses’ disease. Many reported that their partner’s diagnosis was their darkest day, and that they struggled to find hope and balance after juggling career, added household duties and care.

Warren Tasker called upon a fighter’s will when his partner Gwen Borowski was diagnosed with breast cancer on March 1, 2007. He made Borowski’s needs a priority and together they put everything toward the fight, learning all they could about the disease and pressing physicians to explain treatment in detail.

“It was all I thought about, night and day,” said Tasker, an Edmonton-based writer and editor, who wrote about the experience for the Canadian Breast Cancer Foundation – Prairies/NWT chapter.

After years of writing about boxing for the Edmonton Journal, he took up the sport to cope with stress, in addition to his regular running and cycling routine.

“I was getting hit and I was getting to hit back. It felt good—it felt really good,” he said. “You need an outlet, you need to find something to release all the pent-up frustration, the fear, the apprehension, the anxiety.”

In study interviews, filmed and posted online, spouses reported similar experiences, turning to exercise, music, hobbies and time away with friends to find balance. Many expressed a strong desire to be able to talk to or hear from other spouses who went through similar struggles—without taking time from work or family to attend support groups, Duggleby said.

Work schedules also presented challenges with attending medical appointments with their spouses to hear information first-hand, which was another strong need spouses expressed.

“If you’re a working man, it becomes difficult to go to some appointments, although some of that is just perception. They’re not being excluded but they feel like they’re being excluded. It’s part of breaking down some of those barriers in cancer care,” said Duggleby.

Duggleby said the findings should help health-care providers and agencies provide the specific support and resources these men need. For many spouses, an easy solution would be a guide showing where to find online information about breast cancer without information overload.

“They really do want something that’s specific for them, tailored for their needs. It doesn’t have to be done through a research study. There is a lot that can be done just based on what these spouses said and the ideas they provided. It would make a huge, huge difference.”

The study was funded by the Canadian Breast Cancer Foundation – Prairies/NWT.

Holding on to hope
Newsroom