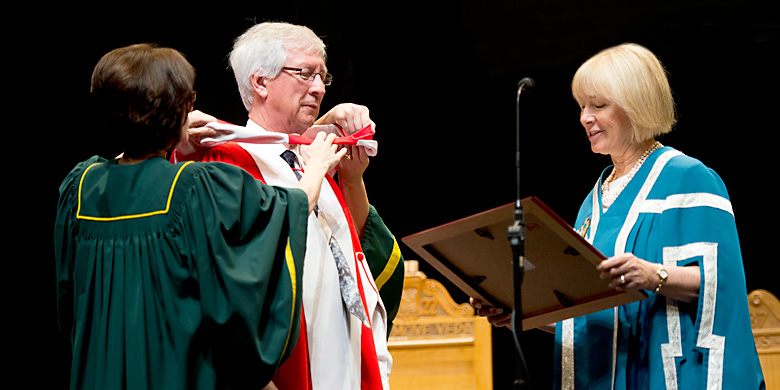 120608-garrylindberg-banner
Garry Lindberg receives his honorary doctor of science degree from the University of Alberta during convocation ceremonies June 7.

(Edmonton) Garry Lindberg’s career achievements include one of the most visible pieces of Canadian engineering ever produced, the Canadarm—a vital piece of equipment on more than 50 space shuttle missions.

Lindberg is an Albertan by birth, and a degree in engineering physics from the University of Alberta in 1960 launched him into an aeronautics career. Moving to the National Research Council of Canada, he became project manager of the Canadarm in 1974, and in 1989 he joined the newly created Canadian Space Agency, rising to the position of vice-president of research and applications.

He also found time to chair an international committee that promoted and developed environmental and earth-observing sensors and satellites. Lindberg retired from full-time employment with the public service of Canada in 1997.

For his body of work, the University of Alberta awarded Lindberg an honorary doctor of science degree June 7.

In his commencement speech, Lindberg recounted his student days at the U of A.

“I arrived here in 1956 as a rather green 15-year-old. The university quietly established a safety net for me so I could survive and flourish during my four years here. Good universities do this and I feel certain that you have benefited from similar support. Be proud that you are a graduate of one of the great engineering schools in Canada and the world. You represent the high standards that the U of A has maintained for over 100 years. Stay involved and help ensure that these high standards continue.”