Honorary degree for U of A's public-education advocate 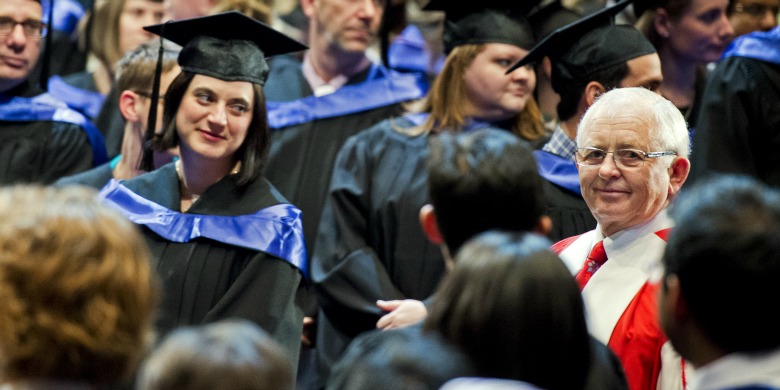 (Edmonton) Three decades ago, a successful Albertan rancher started a journey at the University of Alberta. Today, that journey culminated in his receiving an honorary doctor of laws degree.

Brian Heidecker saw a chance in 1983 to use his experience to advance the university by first helping to determine how research outcomes could be put to practical use.

“We had lots of conversations on how the faculty could improve on that. And I think we made very good progress,” Heidecker said, recalling the dawn of his volunteering era with the Faculty of Agriculture and Forestry (now the Faculty of Agricultural, Life and Environmental Sciences). He also advised on fine-tuning courses to meet evolving needs in the agriculture industry.

Heidecker’s initial impetus to serve only grew stronger as he built a legacy in Alberta through the U of A, where he worked on numerous endeavours to advance the university he says is now one of the most influential in Canada.

“The centre of economic power in Canada is moving westward; that’s been ongoing for the last decade,” he said. “But a similar shift in academic power is happening, migrating westward. And many of the steps the U of A has taken hold us in good stead. We’re becoming one of the most influential universities in the country, and in some fields, in the world.”

Heidecker’s own influence has been part of the U of A’s success story. From industry adviser, he went on to serve on several task forces of the university senate, such as Success by Degrees, creating and advancing opportunities for students.

It wasn’t just the administrators, academics and staff he worked with who recognized the value of his efforts. In 2000, the provincial government appointed Heidecker as external member of the university’s board of governors. The next year, he started chairing its finance committee, overseeing up to $2.5 billion in capital construction. He became vice-chair in 2004 and served as board chair from 2006 to 2011.

Heidecker says his efforts on behalf of the university have been driven by an unshakable belief. “I have a passionate belief in the value of education, particularly public education. And I think that it’s the highest return on investment any government can make.”

He successfully took that message to governments, time and again. And he says the results speak for themselves, noting the university’s unrivalled number of Canada Excellence Research Chairs and its international partnerships such as the Li Ka Shing Institute of Virology and the Helmholtz-Alberta Initiative.

“We’re right at the leading edge of all that; none of these happened by accident. The university is doing spectacularly well and the government is getting their money’s worth, a great rate of return. I’m extremely proud of what’s been accomplished in the last number of years.”

Heidecker is also optimistic about the U of A’s future. “We have a fabulous number of decades coming,” he said. “Cap that off with an excellent working relationship with the provincial government, and that’s about as good as it gets.”

As for the university recognizing his accomplishments with the honorary degree, Heidecker says he never imagined it would happen. “It’s the most improbable journey. I never in my wildest expectations expected to be receiving an honorary degree.”

His message to graduates, which focused on the value of volunteering, reflects his own exemplary experience. “I hope that my words today will help all of you understand how becoming involved in our community, our nation and indeed the world can have powerful benefits on your career and to society,” he said. “Always strive to give more back to society than you receive from it.”

Honorary degree for U of A's public-education advocate
Newsroom