Alex McCalla's run-in with a mean cow was the tipping point toward a distinguished career as an academic and policy-maker. 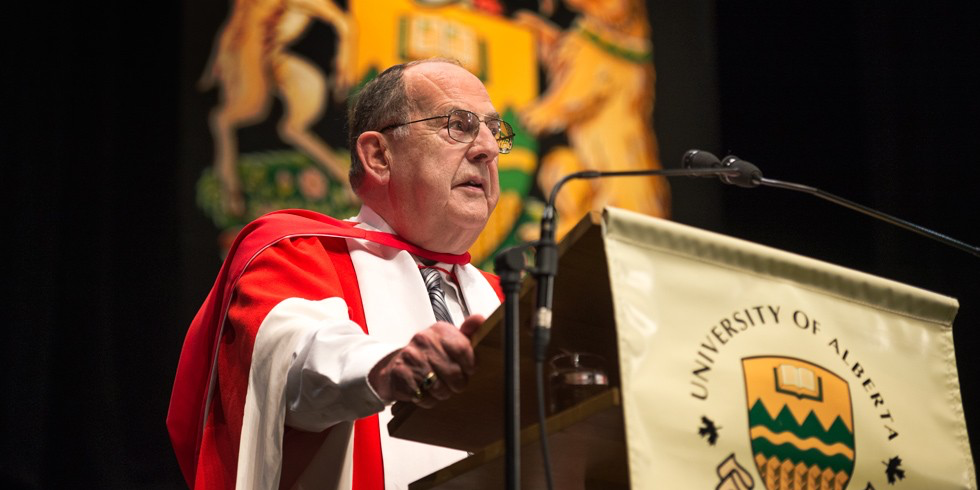 Honorary doctor of science Alexander McCalla addresses graduands of the faculties of ALES and nursing during their convocation ceremony June 3. (Photo: Richard Siemens)

(Edmonton) Alex McCalla was once so convinced he wouldn’t go to university that he poured gasoline on his high-school books and burned them in the yard of his family’s dairy farm near Bremner.

“My plan was to be a farmer,” said the U of A honorary degree recipient to graduands in the Faculty of Agricultural, Life and Environmental Sciences, and the Faculty of Nursing, at Tuesday’s convocation.

“I did not enjoy high school in part because I disliked being shipped to a big-city high school after spending nine years in one and in two-room rural schools.” Three years later, McCalla was flattened by “a mean cow named Bessie,” injuring his back and putting him out of commission for four months.

“That caused me to think it might be prudent to have alternative skills if I was incapacitated at age 40. So despite the concerns of my father that he was losing a third of his labour supply, I enrolled at the U of A in agriculture, the only subject I recognized in the catalogue,” said the former Students’ Union president who would go on to make extraordinary contributions to feeding the world’s poor.

We can now all thank Bessie the cow for propelling McCalla into a long and distinguished academic and policy career. After graduating from the U of A with both bachelor’s and master’s degrees, he earned a PhD in political economy, became dean of America’s largest College of Agriculture and Environmental Sciences at the University of California, Davis when he was only 32, and became founding dean of the university’s new Graduate School of Management before assuming a position as director of agriculture and rural development at the World Bank for five years.

One of his challenges at the World Bank was to reverse a disturbing trend that saw agricultural lending drop by more than half in less than a decade, beginning in the late ‘80s. As co-author of the bank’s new rural development strategy, he contributed to turning the trend around before the turn of the century. That strategy continues to guide the bank’s essential activity in reducing poverty worldwide.

Today the World Bank Group is a leading financier of agriculture—including $8.1 billion in new commitments in 2013—seeking to assist 75 per cent of the world's poor who work mainly in farming. McCalla is now considered an internationally recognized authority on world food policy, trade and economic development.

“Over my academic years my passion has grown for international agriculture and its critical importance in feeding a world whose population will have tripled in 90 years to 9.6 billion in 2050,” he said. “It will remain a huge challenge. In pursuing this passion, and my academic career, I have met many fascinating people, visited almost 90 countries and flown about four million miles.”

McCalla continues to be in wide demand as a consultant and speaker on world food security. Since retiring from the World Bank in 1999, he has continued to teach undergraduate and graduate courses in agricultural trade and policy. He received the U of A’s Distinguished Alumni Award in 2004.

He now represents the third generation of his family to receive an honorary degree from the U of A, after his grandfather, W.C. McCalla, in 1958, and his uncle, Art A.G. McCalla, in 1981.

“So my message to you all is to look every opportunity in the eye,” he told Tuesday’s convocation. “If it looks like it will help somebody and it stirs your passion, give it a shot. If it doesn’t work out, pick yourself up and look for the next opportunity.”