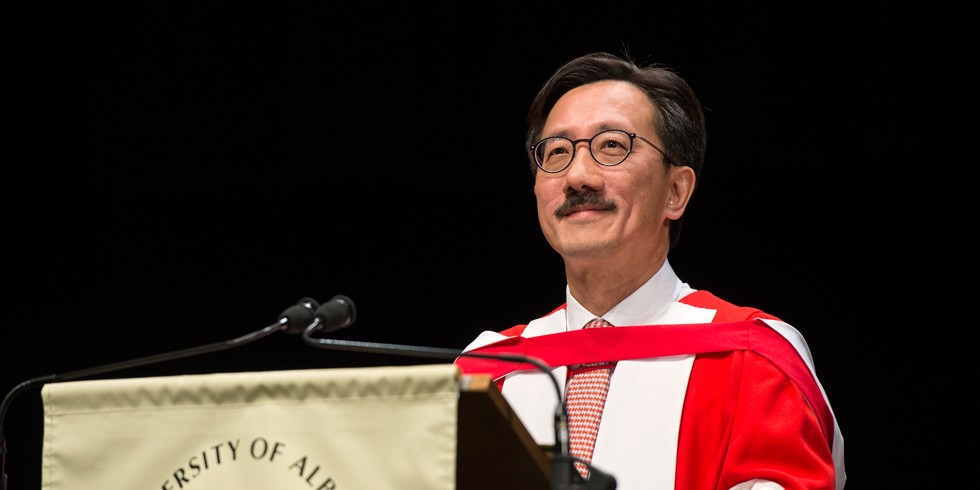 (Edmonton) Coming off of a bachelor of arts degree in 1974 and a law degree a decade later, University of Alberta alumnus John Poon remembers being unsure about what the future would hold, but thinking that if he worked hard and contributed to the good of society, he would be rewarded.

“Four decades after receiving my first degree, with much time to reflect on life, I now realize how much my past decisions and my willingness to step outside of my comfort zone and accept new challenges have charted my destiny and contributed to what I am today,” Poon told the 2014 graduating class of Alberta School of Business students while accepting an honorary doctor of laws degree from the U of A June 9.

Shortly after receiving a U of A law degree in 1984, Poon jettisoned his burgeoning law career in Edmonton to enter the highly competitive corporate arena in Hong Kong—where he thrived.

Among his more notable accomplishments, Poon, as CFO and then as deputy chairman of the multinational firm Esprit, led the fashion giant and oversaw its market capitalization expansion from US$1 billion to more than US$20 billion in nine years between 1999 and 2008.

“I can assure you that as I moved up the corporate ladder, the learning curve for me got steeper and I was saddled with my fair share of adversity and frustration throughout. But capitulating was never an option; rather, I remained resilient and focused on learning new ideas—or at times learning from my own mistakes—in order to scale new heights in life.”

Poon said he was grateful for his ability to speak and write another language, which he urged graduates to do, and his adaptability.

“In business school you are well trained to assess risks and rewards, but remember, if nothing is ventured nothing is gained.”

Poon’s business career has been accompanied by a relentless commitment to public service, which includes service to his alma mater. In 1998, Poon aided the Hong Kong Alumni Association in holding the U of A’s first international convocation.

That day was special for Poon, who reserved the conclusion of his speech to revive a passage from an address he gave during that Hong Kong convocation.

“By graduating, we have acquired for our lifetime a very special non-perishable asset that we should all cherish and be thankful for. By the same token, we should always remember our roots and reciprocate by supporting our university in our own unique ways wherever possible.

“Let's make our university an even finer institution for our future generations to acquire and develop their knowledge, skills and life experience.”