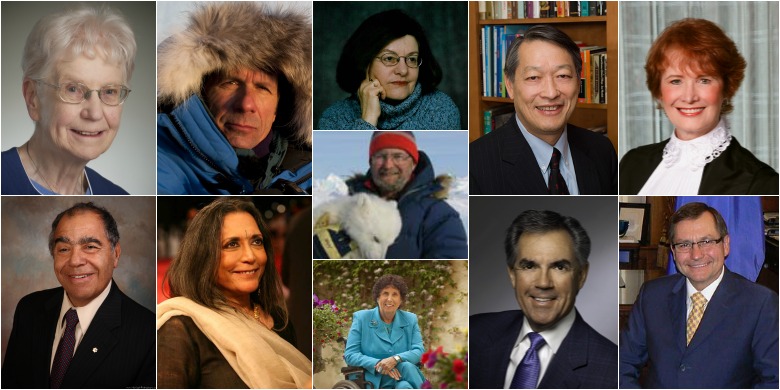 (Edmonton) Inspiration for the University of Alberta's graduating class of 2013 may be found in a range of experiences across borders and disciplines both far away and closer to home.

"A University of Alberta honorary degree recognizes contributions ranging from creative innovation in the arts and sciences to enlightened service in human health and public institutions,” said university chancellor Ralph Young. “Each of these recipients possesses a rare combination of talent and dedication to the greater good. I welcome the opportunity to introduce them to the next generation of leaders who will make their mark in our community and around the world."

For over a quarter century, Margaret-Ann Armour—engaging chemistry professor and alumna—has been Canada’s premier ambassador of science. Volunteering tirelessly to encourage girls and young women to consider careers in the sciences and engineering, she has created and nurtured a range of initiatives through Women in Scholarship, Engineering, Science and Technology, or WISEST. As associate dean of science (diversity), Armour has also developed and implemented Project Catalyst, a series of actions to increase the percentage of women in faculty positions. A talented researcher, Armour has a well-documented passion for teaching and outreach. Her love of engaging students in chemistry was rewarded in 1996 with a 3M Teaching Fellowship, Canada’s premier award for undergraduate teaching. Armour was named to the Order of Canada in 2006. Honorary doctor of science degree – June 11 at 10 a.m.

According to many of the world’s top glaciologists, environmental photographer James Balog has done more than anyone else to communicate the impact of a warming planet on the Arctic. Using complex time-lapse photography, Balog has brought into the public eye dramatic evidence of change to the ice sheets and glaciers of the Northern Hemisphere. Balog has captured time-lapse images from Western British Columbia ice sheets and developed a photography system to use in the high Arctic. These cameras are part of Balog’s Extreme Ice Survey, which documents dozens of glaciers around the world hourly and is considered the most wide-ranging glacier study ever conducted using ground-based, real-time photography. In 1996, Balog became the first photographer commissioned by the U.S. Postal Service to create a full set of stamps. His honours include North American Nature Photography Association’s Outstanding Photographer for 2008 and PhotoMedia’s Person of the Year for 2011. Honorary doctor of science degree – June 12 at 10 a.m.

For nearly 30 years, award-winning novelist and Saskatchewan rancher Sharon Butala has shared her insight into life on the Canadian prairies—experiences driven by an ethos that is both environmentalist and feminist, in works that emphasize the value and glory of rural life. Butala is the author of 16 books—including bestsellers The Perfection of the Morning (1994), Coyote’s Morning Cry (1995), Wild Stone Heart (2000) and Lilac Moon: Dreaming of the Real West (2005)—along with dozens of articles and essays, and five produced plays. Her examinations of nature, human creativity, identity and spirituality, and her first-hand look at the Canadian prairies, make her contributions to Canadian culture original, important and enduring. Butala’s lyrical and eminently readable writing is essentially connected to the lives of ordinary people in Western Canada. In 2002, she was named an officer of the Order of Canada. Honorary doctor of letters degree – June 2 at 2:30 p.m. (Augustana Campus); convocation speaker June 5 at 3 p.m.

Lincoln Chen has dedicated his skills as a doctor, an academic and a policy advisor to fostering collaboration and building health capacities around the world. Chen began his medical career studying cholera physiology and epidemiology at the Cholera Research Laboratory in Bangladesh. Relief work during a cyclone in 1970 expanded his view on health issues to include social equity through the pursuit of poverty alleviation, health, education and social development. As professor at the Harvard School of Public Health, Chen founded the Harvard Global Equity Initiative and has co-chaired the Joint Learning Initiative on Human Resources for Health. More recently, Chen, who was born in Jiangxi province, China, has spent the past five years as president of the China Medical Board, a private foundation to advance health in China and Asian countries through strengthening medical, nursing and public health research and education. Chen sits on numerous boards and has served as an advisor for the World Bank and World Health Organization, including a stint as the director-general’s special envoy on human resources for health. Honorary doctor of science degree – June 7 at 10 a.m.

It may be difficult for current students to imagine the courage and breadth of imagination a young woman needed in the 1960s to become a lawyer, to practise law and to embrace the possibility of becoming a judge. The Honourable Catherine Fraser, chief justice of both Alberta and the Northwest Territories, graduated from the U of A in 1970 and embarked on a pioneering career in law. She transformed the judiciary by becoming an early female appointee to the bench, culminating in her appointment as the first woman chief justice in Canada. Adding to her list of firsts, in 1999 Fraser accepted the role as the first chief justice of the Nunavut Court of Appeal. An active member of the Canadian Judicial Council, she has also served on the board of governors of the National Judicial Institute. A staunch advocate for judicial education at home and abroad, she is widely respected for championing technological reforms in Alberta courts and introducing innovations to increase access to justice. Honorary doctor of laws degree – June 4 at 3 p.m.

Jacob Masliyah has made groundbreaking contributions to the creation of operations and processes that are more energy- and water-efficient, thereby making extraction from the Alberta oilsands more commercially viable and environmentally sound. A professor emeritus in the U of A’s Department of Chemical and Materials Engineering, Masliyah has played a pivotal role in the emergence of a world-leading centre of research. He has focused relentlessly on establishing fundamental science, developing novel technologies and producing the highly skilled people who are essential to resource extraction in the 21st century. His passion for research has inspired many young people to pursue careers in the oilsands industry. As an educator, Masliyah continuously promotes the idea that technological improvements will only be achieved through a better understanding of process fundamentals. In 2008, Masliyah was named an officer of the Order of Canada. Honorary Doctor of Science degree – June 6 at 10 a.m.; convocation speaker at 3 p.m.

The Indian-born Deepa Mehta has been described as Canada’s most internationally renowned woman filmmaker. Her films set in Canada—Sam and Me (1991), Camilla (1994) and Bollywood-Hollywood (2002)—have been acclaimed as sharply observed and gently comic dramas. But it is her film trilogy set in India—Fire (1996), Earth (1998) and the Oscar-nominated Water (2005)—that has distinguished her as one of the leading Canadian filmmakers of her generation. Critics hailed Mehta for her courage in taking on many of the traditional values of Hindu society, and suffering much criticism and even censorship in the process. Her most recent film, Midnight’s Children (2012), is a powerful and thought-provoking collaboration with author Salman Rushdie. Mehta’s filmmaking demonstrates the richness of Canadian culture: a form of multiculturalism that may best be described as fluid or hybrid, composed of the culture of her home country interacting with that of her adoptive country. Honorary doctor of letters degree – June 5 at 10 a.m.

Louise Miller’s dedication to advancing research, technology, health care and education related to spinal cord injuries is nothing short of inspirational. A spinal cord injury resulting in paraplegia in 1984 was the catalyst for Miller’s subsequent lifelong advocacy for people with disabilities, particularly those with spinal cord injuries. As a staunch defender of the interests of disabled people, Miller co-founded the Spinal Cord Injury Treatment Centre Society in Edmonton. A U of A alumna, she has served as a leader with the City of Edmonton’s Custom Transportation Services, the Canadian Paraplegic Association (Edmonton), the Alberta Paraplegic Foundation, and the City of Edmonton Task Force on Persons with Physical Disabilities. In 2000, Miller was appointed as a member of the Order of Canada. In 2008, she received the Canadian Medical Association Medal of Honour. Honorary doctor of laws degree – June 10 at 3 p.m.

The Honourable Jim Prentice, a U of A alumnus, has served at the helm of some of the federal government’s most sensitive ministries—Indian affairs and northern development, industry and, most recently, environment. After practising commercial law in Calgary, Prentice was elected to the House of Commons as the member of Parliament for Calgary Centre North in 2004, and was re-elected in 2006 and 2008. Described by Prime Minister Stephen Harper as the chief operating officer of the Government of Canada, Prentice wore many hats during his time in office, including serving as Canada’s negotiator for the climate change negotiations that culminated in the Copenhagen Accord of 2009. In addition, he harmonized carbon emission policies for the Canadian and American transportation network and established the national policy to phase out dated coal-burning plants in Canada. In January 2011, Prentice joined CIBC as senior executive vice-president and vice-chairman. Honorary doctor of laws degree – June 13 at 10 a.m.

Former Alberta premier Ed Stelmach’s 25 years of public service were marked by a commitment to leadership and integrity. A lifelong farmer, Stelmach began his run in politics in 1986 as a municipal councillor for Lamont County before being named reeve a year later. Stelmach entered provincial politics in 1993 when he was elected as a member of the legislative assembly for the riding of Fort Saskatchewan-Vegreville. As MLA, he led four ministries, including infrastructure (1999-2001), and supported the creation of the Health Research Innovation Facilities—now the Li Ka Shing and Katz Group centres—that have been instrumental in attracting top-tier talent to our community. Stelmach became premier after winning his party’s leadership race in 2006 and went on to win the general election in 2008. As premier, Stelmach supported efforts to end homelessness and create affordable housing. He also recognized the importance of diversifying the economy and seeking global leadership to help shape the province’s future. Honorary doctor of laws degree – June 11 at 3 p.m.

Ian Stirling’s 40-plus years of research have illuminated the plight of polar bears and the consequences of climate change on the Arctic. His outspoken advocacy for the North and his dedication to conservation of ecosystems has made him a true champion of the Canadian Arctic. Between 1970 and 2007, Stirling was research scientist with the Canadian Wildlife Service of Environment Canada, where his work extended beyond polar bears to include other Arctic marine mammals such as the ring seal, bearded seal, beluga whale and walrus. Since 1979, Stirling has been an adjunct professor in the U of A’s Department of Biological Sciences. To date, he has directly supervised or co-supervised 10 master’s students, seven PhDs and two post-doctoral fellows—responsibilities that are not typically part of a government scientist’s role. An elected Fellow of the Royal Society of Canada, he has inspired the next generation of northern biologists through his teaching and research. In 2000, Stirling was made an officer of the Order of Canada. Honorary doctor of science degree – June 12 at 3 p.m.