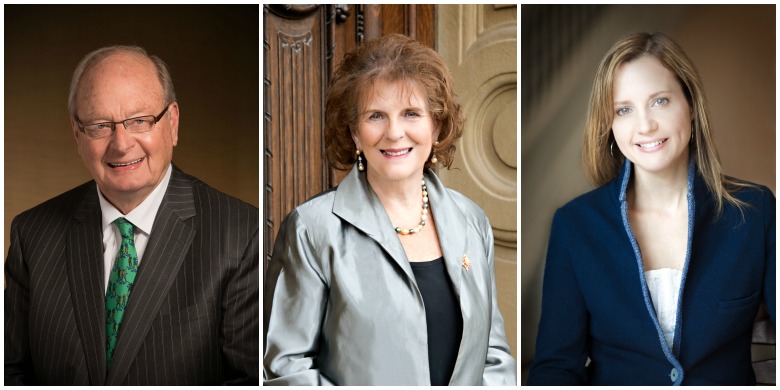 (From left) Hugh Bolton, Lois Mitchell and Samantha Nutt will receive honorary degrees from the University of Alberta during fall convocation ceremonies November 17–18.

The University of Alberta will welcome three more inspiring individuals into the family as honorary degrees are conferred during fall convocation ceremonies this November.

"I am delighted that our university will have the opportunity to honour three outstanding Canadians whose commitment to service extends across a wide range of endeavours and communities here in our province, across the country and around the globe," said U of A chancellor Ralph Young. “The U of A’s newest honourees have built their lives out of giving more than they have received.”

Hugh Bolton graduated from the U of A in 1959 ready to make his name as a chartered accountant. He did that and more on his way to becoming one of Canada’s most distinguished corporate directors and most respected leaders in the accounting profession as chairman and chief executive partner of Coopers and Lybrand (PricewaterhouseCoopers). His influence has been felt across a diverse set of industries, from financial institutions to mining to airlines, and his leadership has advanced numerous enterprises in the not-for-profit sector. In addition to his service with EPCOR and boards including TD Bank Financial Group, Capital Power, Teck Resources, WestJet and Canadian National Railway, among others, Bolton has worked to further organizations such as the Shock Trauma Air Rescue Society (STARS) and the Canadian Diabetes Association, and to serve his alma mater as a member of the Alberta School of Business Advisory Council and chair of the campaign cabinet. In 2006 Bolton was recognized as a fellow of the Institute of Corporate Directors, and in 2010 he received a Lifetime Achievement Award from the Alberta Institute of Chartered Accountants. Hugh Bolton will receive an honorary doctor of laws degree Nov. 18 at 3 p.m.

The Honourable Lois Mitchell, the 18th Lieutenant-Governor of Alberta, is an accomplished businesswoman and long-standing member of Alberta’s dedicated corps of community volunteers. She has made significant contributions in the field of arts, business, communications, athletics and teaching. A lover of sport, Mitchell began her career as an elementary-school phys ed teacher before moving to Calgary, where she created a successful merchandising and sports marketing firm. Mitchell’s successes in the business world, which also included the creation of a corporate training firm, were outpaced only by her commitment to community service. An ardent supporter of women’s hockey and aspiring Olympians, Mitchell became a mainstay with the Hockey Canada Foundation, the Canadian Women’s Hockey League and the Special Olympics Canada Foundation. Her deep appreciation of music and the arts led to involvement with the Alberta Foundation for the Arts and National Youth Orchestra. Mitchell also applied her business acumen as chair of the Calgary Chamber of Commerce, as governor of the Canadian Unity Council and as a supporter of men and women in uniform. Mitchell was named Calgary’s Citizen of the Year in 2008 and was appointed a member of the Order of Canada in 2013. Her Honour the Honourable Lois Mitchell will receive an honorary doctor of laws degree Nov. 17 at 3 p.m.

Conflicts around the world will not be solved militarily; they will be solved by a consistent and sustained approach to development and to fostering human rights on a global level. That’s the theme expounded by Samantha Nutt, award-winning humanitarian, bestselling author, sought-after public speaker and leading authority on current affairs, international aid and foreign policy. Nutt, founder and executive director of War Child Canada/War Child USA, has spent her career focused on providing assistance to war-affected women and children in dozens of conflict zones. Her critically acclaimed book, Damned Nations: Greed, Guns, Armies and Aid, released in 2011, was a No. 1 national bestseller and an uncompromising account of Nutt’s humanitarian work in some of the most devastated regions in the world. A practising family physician at Women’s College Hospital in Toronto and an assistant professor of medicine at the University of Toronto, Nutt is a fellow of the Royal College of Physicians and Surgeons and was named to the Order of Canada in 2011. Samantha Nutt will receive an honorary doctor of science degree Nov. 18 at 10 a.m.