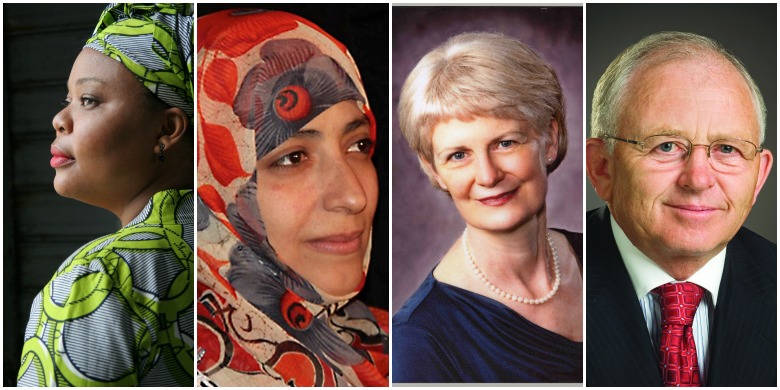 "Leadership takes many forms, whether through contributions to education and public policy, supports for children and families, social change that protects our rights and freedoms, or revolutionary ideas that transform our understanding of peace, democracy and citizenship," said U of A chancellor Ralph Young. "Each of our honorary degree recipients for fall convocation 2012 is an inspiring example of leadership, and I look forward to hearing them address our graduates."

The four honorary degree recipients will deliver addresses during convocation ceremonies in Edmonton Nov. 20 and 21.

Leymah Gbowee is executive director of the Women Peace and Security Network Africa, and a founding member and former co-ordinator of the Women in Peacebuilding Program/West Africa Network for Peacebuilding. Her leadership and advocacy for girls’ and women’s rights united women across regional and religious divisions in Liberia and West Africa. Their non-violent movement for peace and democracy helped to end 14 years of civil war in Liberia and brought about the removal of president Charles Taylor in 2003. In 2011, Gbowee shared the Nobel Peace Prize with Liberian president Ellen Johnson-Sirleaf and Yemeni political activist Tawakkol Karman. Gbowee will receive an honorary doctor of laws degree Nov. 20 at 3 p.m.

Tawakkol Karman is a Yemeni political activist and journalist who became known as the “mother of the revolution” that saw the removal of her country’s president, Ali Abdullah Saleh, in late 2011. Though she came to international prominence during the “Arab Spring” protests that began in 2010, Karman had already been a leading advocate for human rights and a member of Yemen’s main opposition party, Al-Islah, for many years. In 2005, she co-founded Women Journalists Without Chains, an organization dedicated to promoting human rights and freedom of the press in Yemen. In 2011, she shared the Nobel Peace Prize with Ellen Johnson-Sirleaf and Leymah Gbowee of Liberia, becoming the first Arab woman and the youngest person to receive the honour. Karman will receive an honorary doctor of laws degree Nov. 20 at 3 p.m.

Brian Heidecker has been a passionate advocate for higher education and the U of A for nearly 30 years. A successful rancher from 1966 until retiring in 2006, Heidecker began his service to the U of A in 1984 when he became a special advisor to what was then the Faculty of Agriculture and Forestry. He was appointed to the university’s board of governors in 2000, and served as board chair from 2006 to 2011. His tireless work to advance the university’s mission and vision was recognized in 2008 when the U of A received the Spencer Stuart Conference Board of Canada Public Sector Governance Award. He has served on numerous boards, including ATB Financial and the Bank of Canada, and has been influential in agricultural development and policy. He received the Alberta Centenary Award in 2005 and the Queen Elizabeth II Diamond Jubilee Medal in 2012. Heidecker will receive an honorary doctor of laws degree Nov. 21 at 3 p.m.

Marguerite Trussler was a Justice of the Court of Queen’s Bench of Alberta from 1986 to 2007 and was president of the Canadian chapter of the International Association of Women Judges from 1998 to 2000. A pioneer in family law in Canada, the U of A alumna led numerous programs that have improved the lives of children whose parents are divorcing. She was instrumental in implementing Parenting After Separation, a mandatory educational seminar for divorcing parents that was the first of its kind in Canada. An active community supporter, she founded the Victoria School Foundation for the Arts, which provides annual scholarships and master classes for students. She received the Queen Elizabeth II Golden Jubilee Medal in 2002, the Alberta Centenary Medal in 2005 and the U of A’s Distinguished Alumni Award in 2011. Trussler will receive an honorary doctor of laws degree Nov. 21 at 10 a.m.