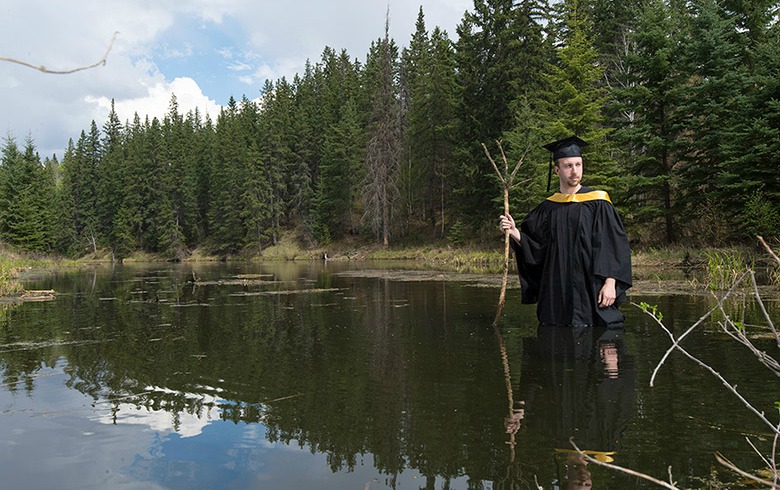 130605-alan-shapiro-banner
Alan Shapiro got his feet wet in water science with an Honors BSc at UAlberta. Now he wants to master the art of walking on water as he bridges the knowledge gap between researchers and policy-makers. (Photo: John Ulan)

(Edmonton) Alan Shapiro found water at the University of Alberta. It happened four years ago and it set Shapiro on a course of studies that culminates this week in a bachelor of science degree with honours.

Shapiro says the discovery was quite by happenstance after his first year at the U of A. “I was looking for a summer job on campus and got one in the hydrology lab in the Department of Earth and Atmospheric Sciences.”

Exposure to the science of water movement, water cycles and watersheds gave Shapiro a thirst for more, and water became the focus of his science education.

And just when Shapiro wanted to expand his thinking to include water issues, he discovered another U of A learning experience.

“I’m a scientist, but do I know how the science fits society and impacts society?” Shapiro found the answers in human geography, a course in which the science of water meets human interaction.

“My thesis was the history of water policy in Alberta and Canada,” said Shapiro. Like a river, that U of A learning experience carried Shapiro to a realization—and a career path.

Shapiro credits the U of A’s “holistic” multidisciplinary approach to water research and his professors with shaping his future.

“I wasn’t one of the kids graduating high school knowing exactly what I wanted to do,” he said. But the people I’ve met here and the connections I’ve made have equipped me to take the next step.”

Shapiro’s next step is New York City and a master’s degree in Earth and environmental engineering at Columbia University.

“The lesson I learned at the U of A is, you have to talk to your profs. They’re more than willing to help,” said Shapiro. “It’s your first step in forging your interests into the appropriate training. I did it and I got a lot out of my time at the U of A.”