They have a good product, but now they need money to scale up and go big in a highly competitive industry. 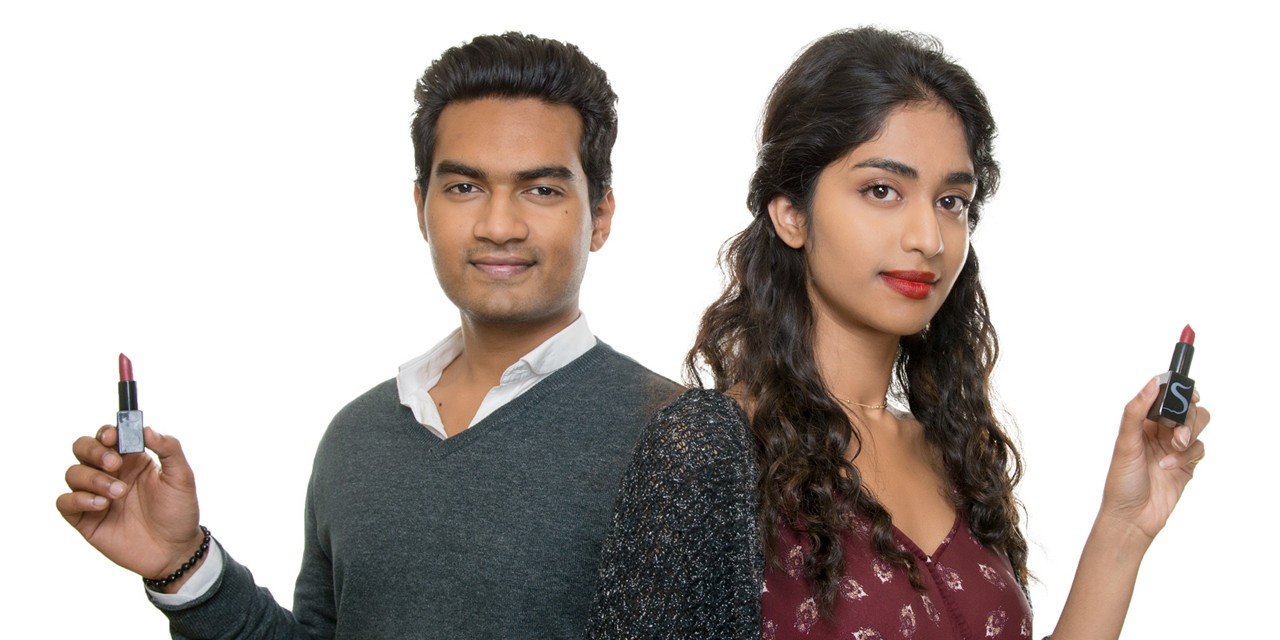 UAlberta engineering students Akash Gupta and Sravya Kalyanapu are in the midst of securing an investor to take their all-natural, inexpensive lipstick to the next level. (Photo by Richard Siemens)

Some of the most powerful businesses have humble beginnings. Mattel came to be in a garage. Facebook in a dorm room. And if UAlberta engineering students Akash Gupta and Sravya Kalyanapu achieve the vision they have for lipstick brand Seleste, the story will be told starting with a pot on a kitchen stove.

The idea for a lipstick launch came from the less likely of the two, Gupta, considering he doesn’t wear any. After a trip in 2016 to the cosmetics store with his mom and sister, Gupta was stunned. “I noticed how much they were spending on lipstick that they complained dried out their lips,” he explained. An entrepreneur at heart, Gupta, who attended Harvard School of Business summer school in high school, did a little preliminary research and was even more surprised to learn many lipsticks contain toxic chemicals.

He mentioned it to chemical engineering colleague and friend Kalyanapu, and together they discussed the possibility of creating their own healthy lipstick formulation. “We wanted to develop an all-natural product that won’t cause any harm, that’s affordable, and that as a woman you can feel good about buying,” said Kalyanapu.

It seems like a sure thing . . . but it’s far from the case. This pair of U of A engineering students is currently in the perilous early phase of product development called “the valley of death.”

Surviving the valley of death

The term valley of death is used rather liberally in business circles to describe a stage in a company’s journey when it has run out of capital but isn’t in quite an attractive enough stage to get more.

“In order to appeal to an angel investor, Seleste needs proof of concept or demonstration of feasibility. In other words, some significant sales,” explained Noreen Hoskins, director of eHUB, the U of A’s entrepreneurship centre. “They have a formulation, they’ve sold a few, they have a bit of inventory and it’s popular. Now the challenge for them is how do they scale this.”

Gupta and Kalyanapu have put about $500 of their own money into getting the brand off the ground with an e-commerce website. They also received $1,000 via eHUB’s Badge’s program, a learn-by-doing guide to entrepreneurial development that rewards students as they achieve fundamental milestones.

“Since we are engineers, we really weren’t sure how to take a product idea, make a company out of it and make it profitable. The people at eHUB really helped us. They sat with us for hours and hours and gave us a ton of encouragement and mentorship,” said Kalyanapu.

The pair examined the market quite closely, assessing whether there was a demand or need for their business concept. Then they built a business plan that outlined potential market share. While 95 per cent of lipsticks are non-organic, Gupta said he’s hoping to steal some of that share by appealing to all lipstick wearers, especially given the socially conscious twist to Seleste: the company is donating a portion of every sale to empowering women’s education in developing nations.

“We were thrilled with our early in-market validation for prototypes that we debuted at a fair in our hometown, Fort McMurray, in the summer of 2016,” said Gupta. “In the first two hours we sold 14 lipsticks and our first customer was the mayor.” He added that their long-term plan is to move beyond e-commerce into retail spaces like Sephora.

However, the students are well aware that their success in a highly competitive cosmetics industry will hinge on word of mouth and knowing the right people to make inroads in a tight knit retail sector. To help them shift out of the prototype phase, the pair participated in eHUB’s Accelerate program this summer, added Gupta.

“One of the ways eHUB helps student entrepreneurs is with building the right networks and connections,” added Hoskins. “For Seleste, that entails reaching out into the ecosystem to garner industry support for specific aspects of product development like tapping into our network of consumer product partners, including the Agriculture & Food Council of Alberta and the National Research Council Canada, for example.”

eHUB mentor Tapan Gupta (no relation to Akash) added, “Those two have a great business idea. The key to cracking the cosmetic market is knowing how to expand your network and finding the right mentors. Akash, with his business background and skills, has good connections.”

The tough get going

“The beauty of working at eHUB is that the centre accommodates all speed of travel: as long as student entrepreneurs are moving their ventures forward—regardless of their rate of progress—eHUB is there to support them,” said Hoskins.

That’s some consolation to Gupta and Kalyanapu, since they’re still hitting the stove to finalize their product. “That’s been the most challenging part. It takes a lot of time and we are really busy with school,” explained Gupta.

That’s not all: Kalyanapu is searching for the perfect red shades while also juggling academic goals and recently competing in Miss World Canada, where she landed the People's Choice Award and placed in the Top 15. “We’ve got great pinks and browns. I’ve finally found natural ingredients that make beautiful reds,” she said.

Both students concede getting Seleste off the ground is a full-time job. “Our degrees really help us prioritize,” said Gupta. “We’re often managing six courses and designing a project. But, ultimately, compromises have to be made.”

Moving forward, patience and support will be key to keeping the brand’s momentum and growth. Both students say they hope to dedicate themselves to the company full-time after graduating next year.

“For Sravya, this gives her an opportunity to do something else she’s passionate about—encouraging other women to be leaders and entrepreneurs,” said Gupta, adding that Seleste is an unexpected and welcome avenue for a pair of engineering students who would otherwise be looking to break into the oil and gas sector.

“We’re really committed to making Seleste a huge success. We believe strongly there is a demand for a socially conscious all-natural lipstick,” said Kalyanapu. “Women want to feel good about themselves inside and out.”