John Dunn offers an inside look at how Team Koe is mentally preparing for PyeongChang. 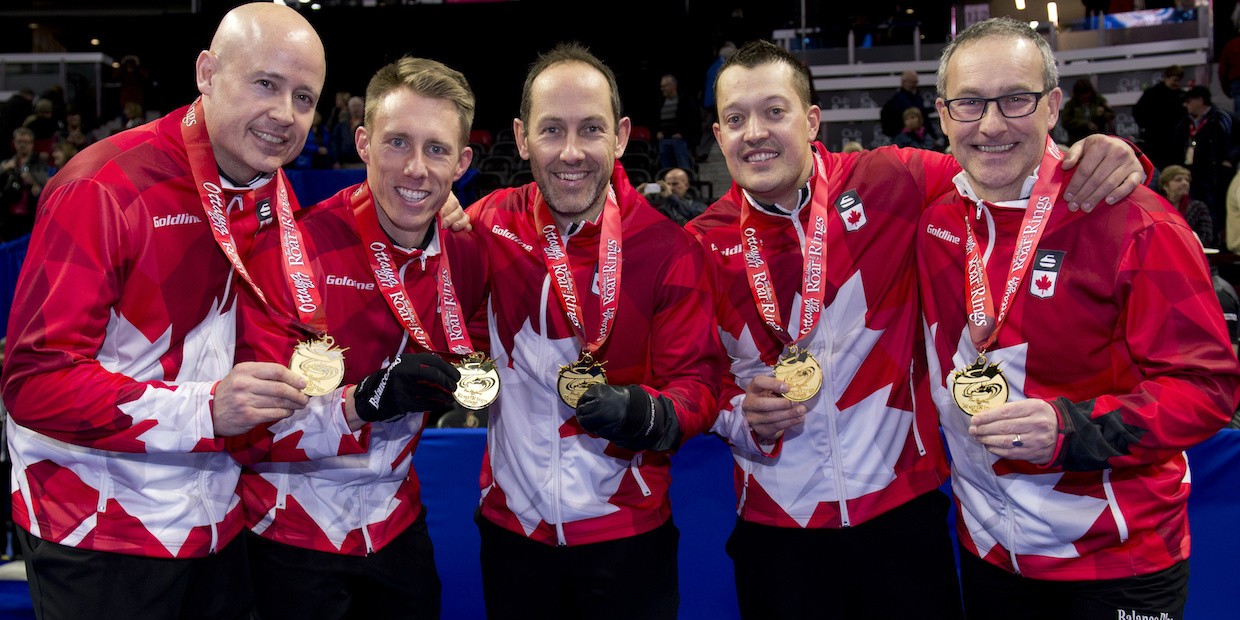 John Dunn (right) celebrates with Team Koe after their victory in the 2017 Canadian Olympic Curling Trials. Dunn is joining the team as a mental performance coach as they compete for gold in the 2018 Winter Olympics in PyeongChang, South Korea.

The road to the 2018 Winter Olympics began in earnest for University of Alberta sport psychologist John Dunn last December when he was part of the coaching staff for Kevin Koe’s Alberta rink at Canada’s infamous Olympic curling qualifier.

Billed as the most trying and ruthless tournament in Canadian curling, the Roar of the Rings takes three years to qualify for and pits eight of the top teams in the world in a winner-take-all clash where every game is like sudden-death overtime.

“Imagine every single game you play, there is no easy game, there is no margin for error,” said Dunn, a professor in sport psychology in the Faculty of Kinesiology, Sport, and Recreation. “And every game you play, you know that the potential of going or not going to the Olympics is on the line. It’s not fun—until you win, and then it’s fantastic.”

Emerging victorious from this brutal test of will and skill, the Canadian men’s curling team made up of Koe, Marc Kennedy, Brett Laing, Ben Hebert and Scott Pfeifer have, with Dunn’s help, set their sights on the ultimate prize—gold at the Olympics in PyeongChang, South Korea.

Plan, plan, plan for every eventuality

Dunn, who hails from Glasgow, Scotland, has spent the last decade working alongside Team Koe in the role of mental performance coach, helping Koe and the various incarnations of his rink to three Brier wins and two world championships before this latest accomplishment.

In his work as a mental performance coach, Dunn focuses more on the team dynamic and organization than the sport of curling itself. When the team gets to South Korea, he’ll be tasked with looking after the team’s schedule for the entire 18-day event: planning and finding locations for pre-game meetings, preparing videos and readings for meetings, determining what other Olympic events the team will take in and when they’ll spend time on dynamic teamwork.

The key component for Dunn is to keep in mind what his role requires in different situations.

“There is usually a Plan A and a Plan B depending on if we’re winning or not,” he said. “We prepare for every eventuality. What happens if someone gets sick? What happens if our alternate has to go in? A big part of my job is to think of those ‘what ifs’ and make sure we have a contingency plan in place.”

‘They don’t pay me to be their friend’

Dunn says his contributions to the team actually have nothing to do with the strategy and tactical aspects of the game. In fact, he admits that when the game is deep and there are multiple rocks in play, he hasn’t a clue what shot is needed.

“But I don’t need to have a clue. In many ways, I think it enhances my ability to do my job. While the team is getting caught up in the strategy, I’m looking at other aspects of the game—watching the team’s communication, body language, pre-shot routines and how they are communicating after both good and bad shots. I have the luxury of not being distracted by the strategy.”

Having a mental performance coach, according to Dunn, helps keep the team dynamic strong. By managing and monitoring the team dynamic, Dunn becomes the person the team can direct their frustrations at, as opposed to one another. Playing the “bad guy” is a hugely important aspect of his role, and a task that Dunn embraces.

“They don’t pay me to be their friend. They pay me to help make them champions,” said Dunn. “I don’t provide a huge gain, I provide a marginal gain, but maybe it’s that one or two per cent that is required to win those major events.”

With the goal clear, Dunn and the rest of Team Koe are treating the Olympics like a business trip, but the uniqueness of this event is not lost on them. Attending the Winter Olympics for the third time in his career—previously as part of the mental performance team for men’s and women’s biathlon and men’s alpine skiing teams in both Torino (2006) and Vancouver (2010)—Dunn knows that added pressures come with representing your country. But along with those pressures come added perks.

We all play for Canada: managing the pressure

“Everyone within the Canadian contingent will try to help everyone else within that contingent. That’s the really cool thing about the Olympics. It’s the only time in our sport where we are part of a multi-games experience, and we genuinely feel part of the larger Team Canada.”

Dunn adds the pressures of wearing the maple leaf can and must be managed. While acknowledging that they are part of the Canadian contingent, he says the team will approach every game playing for each other.

“If they think that every time they step onto the ice they’re playing for their country, the pressure will become too much to handle,” said Dunn. “This is the mindset that the team has all agreed to adopt. They will, of course, play to the best of their ability, and if they win a medal, will be proud to share it with the country, but will do what it takes to manage the pressure.”

Another part of managing the pressure is balancing business and fandom. Dunn says Team Koe is cheering for every single Canadian athlete, and will take advantage of the Olympic atmosphere, but they aren’t going in as fans. Instead, they’re going in as colleagues. They won’t be monitoring the medal count, but if someone does win a medal, Dunn says he wants his team to feed off that positive energy and recharge the emotional banks that will be drained after each and every match they play.

“We will take advantage of the Olympic atmosphere,” he said. “We will go to the opening and closing ceremonies. In those moments, we will become fans, and we will enjoy those experiences of walking in, wearing the maple leaf and saying, ‘at this moment, we’re representing Canada.’”

Dunn admits to being excited as this is the first time he is going to the Olympics as a full coach on a Canadian Olympic team. He acknowledges both the Faculty of Kinesiology, Sport, and Recreation and the University of Alberta for allowing him the freedom to pursue his coaching role with Curling Canada, and notes that his experience at the Olympics will not only be a badge of pride and honour, but will impact his students through his teaching and research.

But like the rest of Team Koe, Dunn is tempering his excitement and focusing on the task at hand: winning the men’s curling gold medal.

Heading into the tournament, Dunn says Team Koe is one of the most experienced teams on the bill. Taking a one-day-at-a-time approach, their focus is solely on their first opponent, Italy. Although he admits it’s a bit cliché, Dunn notes that taking it one game and one day at a time is the only way to be successful at these events.

If there is any doubt as to what Team Koe’s expectations are for the 2018 Winter Olympics in PyeongChang, Dunn asks you to take a look at the first three letters in their expression ‘What’s Important Now.’