How bookmakers tip sports-betting odds in their favour

Oddsmakers capitalize on fans’ emotions to turn a profit no matter which way the game goes, new research shows. 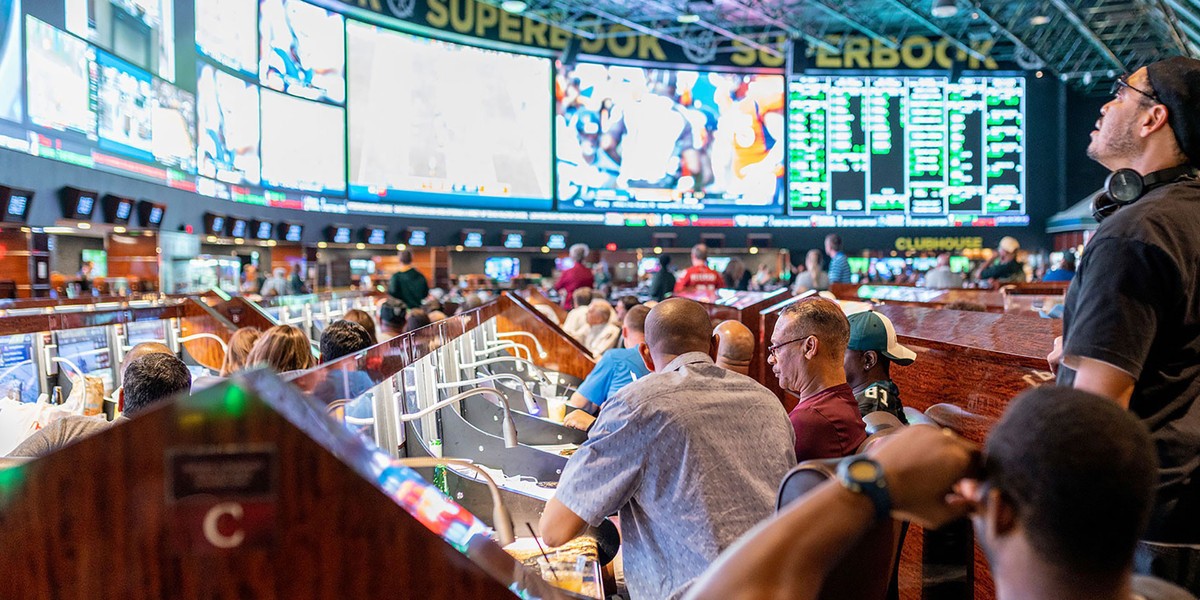 Bettors watch games unfold on big screens at a sports book in Las Vegas. Bookmakers capitalize on fans' emotional attachment to their favourite teams to turn a profit from sports betting no matter who wins, according to a new study by a U of A sports management expert. (Photo: Westgate Resorts)

At the start of each term in Brian Soebbing’s class on financial management in sports, he asks students how many would always bet on the hometown Edmonton Oilers, whether they’re favoured to win or not.

“Most raise their hand,” said the University of Alberta sports management expert. “Then I ask the Oilers fans how many would almost always bet on the other team. There are a few, because we also see there's a lot of other people who would hedge their bets and always bet against the Oilers. Because at the end of the day, they're going to walk away happy—either their team won the game, or they're going to win their bet.

“Bookmakers know this, are really good at their jobs and they take advantage of it,” he explained.

And recent research he conducted looking at how bookmakers capitalize on this sentiment bias backs it up.

Soebbing and colleagues from West Virginia University and the University of Southern Denmark analyzed the point spreads and bet outcomes for three decades of NBA games and found that bookmakers increase prices on bets involving popular home teams.

“When we think about the point spread, it’s going to capture all relevant, fundamental information—the strength of both teams, who's injured, who's the home team, stuff like that,” said Soebbing. “What we found is a portion of those spreads can be attributed to popularity.”

A point spread is a forecast of the number of points by which a stronger team is expected to defeat a weaker one in an effort to invite equal betting on both teams, which in turn reduces bookmakers’ risk. With a profit margin built into a bet, equal betting, or action, ensures the bookmaker makes money no matter who wins.

Soebbing said early sports betting literature often assumed bookmakers attempted to balance the volume of bets on individual games to earn a certain profit regardless of the outcome. However, it appeared this behaviour doesn’t necessarily occur.

The research team used two variables of popularity to measure sentiment bias: the difference in percentage of each arena’s seating capacity filled in the previous season for competing teams, and the difference in the number of votes fans cast for players on each NBA team to play in the all-star game.

The researchers then put that up against point spreads of more than 33,000 regular-season games played between 1981 and 2012, which Soebbing began collecting as a PhD student at the U of A a decade ago.

What they found was for every one per cent increase in the difference in stadium capacity that the home team held over a visitor, bookmakers favoured the home team by an additional 1.3 points.

As well, for every one per cent increase in the difference in all-star voting shares that the home team held over the away team, bookmakers adjusted the spread by an additional 0.2 points.

He points to a game on April 12, 1996, between Michael Jordan’s 68-9 Chicago Bulls—who were in the midst of setting the single-season win mark (72) and well on their way to their fourth title—and the hapless Philadelphia 76ers, who would only muster 18 wins that year.

The Bulls were at home, which Soebbing noted is a huge advantage. In fact, the group found the home team won 62 per cent of the time, with the margin of victory being just under four points from 1981 through 2012.

But this wasn’t two equal teams. Because of the perceived mismatch, oddsmakers tilted the betting line and made the Bulls what was then a record 20-point favourite.

“After controlling for home-court advantage, on-court success and talent, within that 20-point spread, however, some was the popularity of the Bulls.”

The Bulls would easily cover the point spread in winning 112-82, which wasn’t completely unexpected—as Soebbing explained, oddsmakers wouldn’t have shaded the odds very much.

“Even for that Bulls-76ers game, if there was an opening line that showed a 19.5 spread and it went to 20, that's a big move,” he said. “The actual number of points added to the spread because of sentiment bias is going to be in decimal form rather than whole numbers.”

And while oddsmakers can use this strategy to boost their profits, Soebbing said it’s a strategy that’s a one-way street.

“At the end of the day, if you use a strategy of not betting the popular favourite, or not betting a popular underdog, you, the bettor, over this time, will not make a profit off of that strategy. But the bookmakers will.”

How bookmakers tip sports-betting odds in their favour