Tragic death toll among seniors in nursing homes was half a century in the making, says elder care expert. 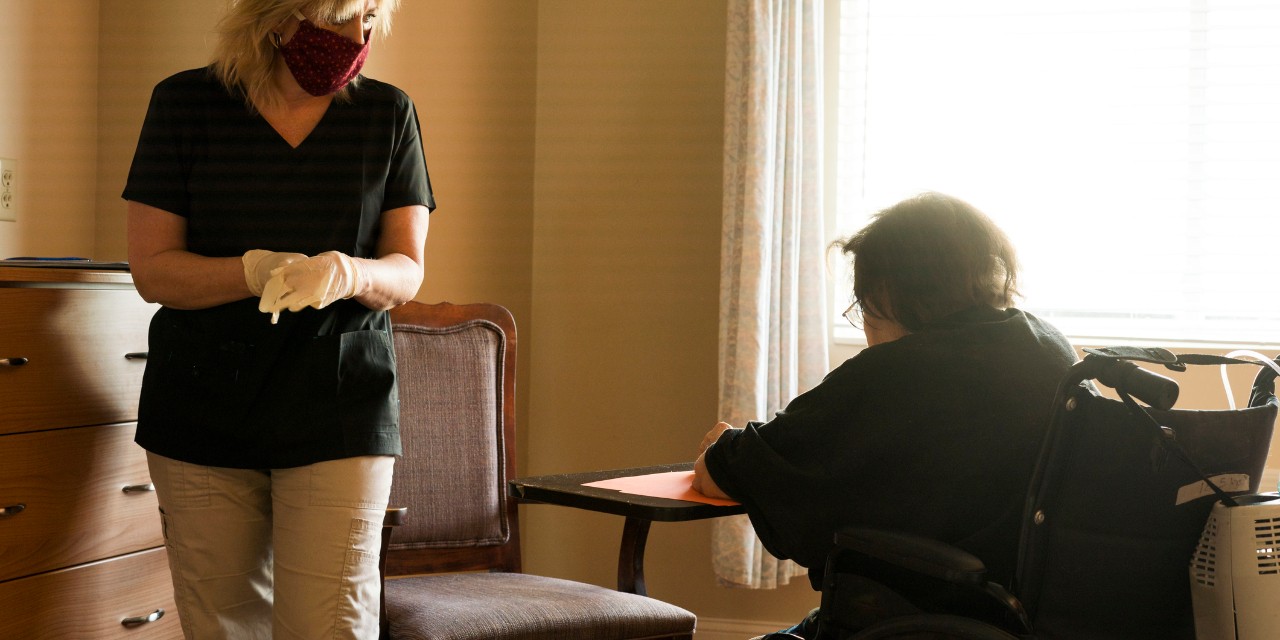 Care aides shouldn't be blamed for the mounting COVID-19 death toll among seniors in long-term care, according to a U of A researcher who says chronic problems with quality of care in the system have existed for decades. (Photo: Getty Images)

Canadians are witnessing a tragedy unfold in the nation’s long-term care system that’s been a half-century in the making, according to a University of Alberta elder care expert.

“We’ve been holding it together with duct tape,” said the Canada Research Chair in Knowledge Translation in the Faculty of Nursing. “I think the care aides who work in long-term care are heroes and when they have left their posts or have been perceived to, whatever the reason, we should pause a minute before we ‘blame and shame.’

“We should think about how bad, how desperate it must have been for them to do that.”

Of the more than 1,800 Canadian deaths attributable to COVID-19 so far, more than half have happened in long-term care residences. The worst disaster is playing out in a Montreal care facility where 31 seniors died in less than a month. Authorities arrived at the site to find that 100-plus residents had been abandoned by much of the staff. Of Quebec's more than 1,000 deaths, 850 were elders in care. The military, hospital staff and volunteer nurses and physicians have been called in to stem the crisis

Estabrooks and her pan-Canadian and international team, Translating Research in Elder Care, or TREC, have been working on chronic issues associated with quality of care in nursing homes for 14 years, and she said the problem goes back decades.

The flaws in the system are exacerbated by the reality that Canadians live much longer and have more chronic conditions, while baby boomers are steadily making their way into the system, resulting in a temporary but decades-long bulge in numbers.

Estabrooks explained provinces’ aging-in-place policies mean people are entering care at older ages and bringing with them a host of more advanced chronic conditions like heart disease, diabetes and lung conditions, as well as significant increases in dementia, Alzheimer's and other neurodegenerative diseases.

“I would argue that most admissions to nursing homes are driven by dementia.”

She said all that adds up to a population that requires more socially, medically and physically demanding care from caregivers doing a job that isn’t considered highly desirable by many.

The pay runs between about $18 and $24 per hour, protective equipment may be in short supply, homes are perpetually understaffed and overcrowded, and the work takes a high physical and mental toll.

Estabrooks said the pandemic did not cause the crisis; it came along and caused a massive shock to the long-term care system, shining a harsh light on fractures in a system that was ripe for catastrophe.

“COVID-19 overwhelmed the system,” she said. “There is no herd immunity, there is no vaccine, there is no effective treatment at present. Nursing home residents are highly vulnerable. They’re older, more frail, with less effective immune systems.

“Once it gets into a nursing home, it can move through a facility like an Australian brush fire if conditions are not completely optimized.”

She said the perfect scenario includes testing of residents and staff, aggressive measures to protect and isolate, as well as optimized policies and practices, before the outbreak.

“Without these and a good deal of luck, it was destined to spread,” she added.

Estabrooks noted a seasonal flu can be deadly in a long-term care facility as well, but residents and all the staff are vaccinated against it. If a particular outbreak is localized to nursing homes, she said infection protocols kick in and the residence goes into lockdown. She added people know how to handle local outbreaks, and though they can be tragic, they pale in comparison to a pandemic.

“An outbreak gets contained and it runs its course over a period of usually no more than a few weeks,” she said.

However, COVID-19 moved easily through these failsafe measures.

Estabrooks said staffing issues started to appear as soon as staff members started testing positive and were quarantined at home. Those shortages were stretched by outside pressures to stay home—whether from family members or their own fear of spreading to their family. She added some front-line staff were even threatened by landlords who do not want them working in a COVID-positive care home.

And while all provinces have now used a combination of regulations, legislation and pay increases to eliminate the need for care aides to work in more than one home, Estabrooks said the practice was widespread across Canada and proved to be one of the gateways for the coronavirus to move between homes.

“And now we see what we hoped we would never see, but it happened in Italy, it happened in Spain and now it's happening here, with these horrific situations like we've got in Quebec and Ontario,” said Estabrooks.

“What makes a group of care aides—in these extreme cases we see in the media—abandon their residents? Imagine their work conditions and the anguish they must have gone through.”

She said it's hard to know exactly what’s going on in the homes where the staff abandoned the residents. What she does know is that the front-line workers probably did not have enough personal protective equipment, education or basic numbers to provide care. They were undoubtedly fearful and overwhelmed, the wider system may not have responded or thought it was a priority, and it is certain the front-line staff did not have enough basic and ongoing continuing education to prepare them.

“They know what to do in the case of a flu outbreak, but there are some additional things with COVID-19,” said Estabrooks. “Physical distancing is the most important thing, but they're bathing, toileting and feeding these people.

“You can't get six feet away and do any of that.”

In the wake of the deaths, Ontario Premier Doug Ford banned the practice of working in more than one home and boosted salaries, and authorized homes to do whatever it takes to shore up staffing levels.

“Stabilizing the workforce was the first thing,” said Estabrooks. “Let's bring teams in from acute care and paramedic programs and yes, even the military if that is what is needed to stabilize the places that need it.

“As long as the brush fire is burning out of control, you can't do anything planful.”

Ensuring care aides work in a single home is a must during this pandemic, as is mass testing of everyone living or working in the home.

Estabrooks also raised the question of when this becomes a human rights issue with regard to how long you can keep loved ones away.

“The biggest problem that all people in nursing homes have is loneliness, boredom and a lack of purpose,” she said. “So what have we done? We stopped communal dining, stopped recreational activities, stopped families from visiting, we stopped excursions, we stopped children from coming in. That cannot go on for two years; it is not ethical.”

She also added we need to start preparing for the mental health issues that will arise.

“If you think doctors and nurses are going to have moral injury, PTSD and other problems, how do you think care aides are going to react from watching people they have formed long-term relationships with die in pain and suffer alone?”

She said a national task force will have to be struck to look at what went wrong and rebuild the system to include facility upgrades, better training and equipment, improved work conditions and a long hard look in the mirror at what Estabrooks says is a highly feminized industry whose sex and gender issues have not been addressed.

She noted that the elderly have become invisible in Canada.

“They have no voice, they're frail, they have dementia,” she said. “They are no longer what a society might consider unit-producing citizens.

“But these people built this country, so it seems to me that since we're all going to be there, we might want to think differently and use this tragic pandemic to make fundamental and lasting changes.”