Graduate student chronicles how one family carved a space in their community, one dignified experience at a time. 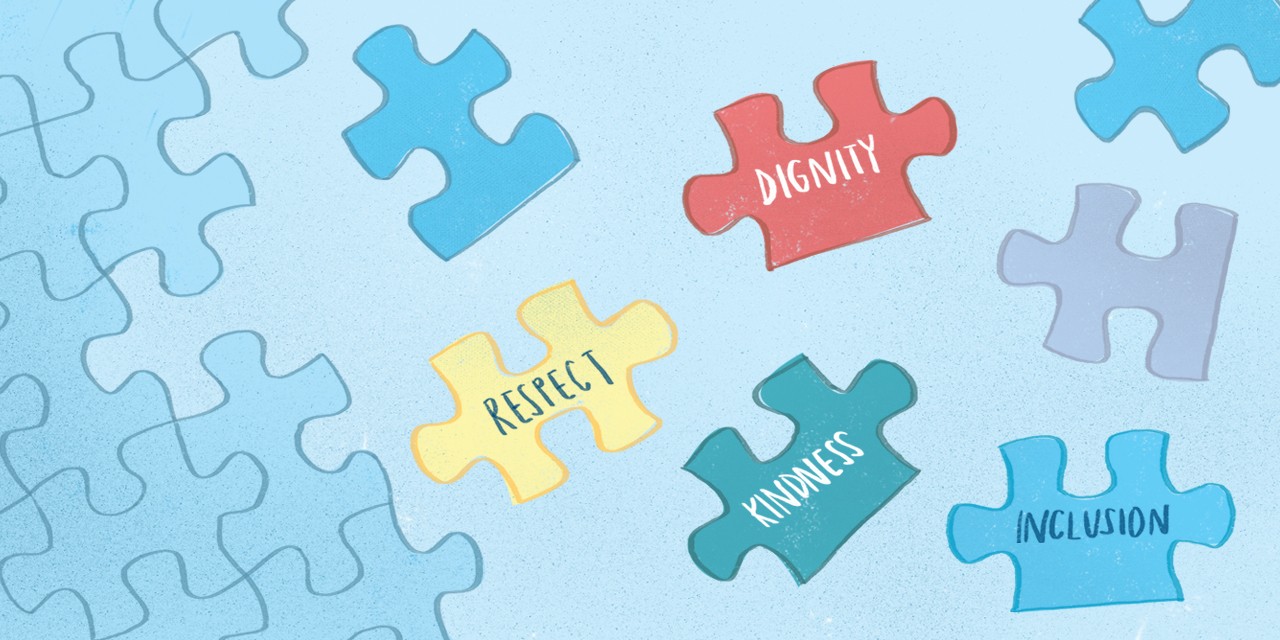 A little kindness to families experiencing autism goes a long way in helping them develop a sense of belonging in the community.

For many families, enjoying leisure time free of stares, comments and concerned questions is taken for granted. But for eleven-year-old Zach and his family, the feeling of being singled out is a regular occurrence—and something that happens routinely when they’re on family outings.

The reason? Zach has autism.

“When Zach was smaller, his reactions to over-stimulation could be chalked up as typical, quirky childhood behavior,” said Zach’s mother, Darcie, explaining that he would sometimes bounce on his toes or wave his hands in his face. “Now, as a tall and growing young man, people start to take notice when Zach is over-stimulated.”

While most people are respectful, Darcie noted that she and her husband get a lot more questions and concerning looks than they used to.

“Sometimes, it can feel really bad.”

“I wanted to capture the family's experiences of dignity and share their story to create the wakefulness that is needed to be aware of how one's actions may affect other people in community-based settings,” said Boyd.

She analyzed the experiences of a six-year-old boy with autism, Cole, and his family—his mother, father, grandmother and great-grandmother— over a four-month period.

Early experiences of dignity for Cole’s family were intricate and multi-layered. Stares, glares and comments made the family feel singled-out and separated from others. The social exclusion experienced left Cole’s parents feeling ostracized, causing them to avoid some activities and places altogether.

“Previous research shows that children with autism experience increased rates of indignity over other children through physical, verbal and relational forms of bullying, often in public settings,” said Boyd. “For Cole’s family, the way both he and his family were treated in community-based settings made it extremely difficult for them to enjoy and even participate in family leisure.”

Over time, and as Cole got older, his parents adopted strategies to help maintain self-respect and dignity for both Cole and the entire family, and they refused to let exclusionary reactions stop them from spending time in the community.

One strategy involved preparing Cole to feel comfortable in leisure environments. This involved informing Cole ahead of time where they were going, what they will be doing, who might be there and what sensory stimulus—such as loud noises, large groups or bright lights— might be present in the environment. They also made sure to remind Cole of his coping strategies, which include asking for his noise-cancelling headphones, taking deep breaths or taking a break.

When preparation wasn’t feasible or successful, Cole’s parents ignored and rejected hurtful and exclusionary actions of others. These tactics were shared with Cole’s grandmother and great-Grandmother and together, they stood their ground to create a space for their family in their community.

For the families of Cole and Zach, acts of kindness and inclusion play an integral role in creating a sense of belonging.

“It’s the moments of genuine responsiveness from people in the community—whether it’s Zach’s teachers, the ladies at the community hall or a server at a restaurant—that carve out a place of belonging in our community for our entire family,” said Darcie.

Boyd said that Cole’s parents, grandma and great-grandma felt that acceptance was demonstrated by the community when people expressed a desire to understand Cole.

“This family appreciated being approached with questions that were framed as caring and curious because it demonstrated a desire to understand and connect with Cole and his family members.”

She added there’s no single recipe for promoting dignity.

She said she hopes the stories shared by both families provide leisure and recreation practitioners, researchers, families and the general public with insights into creating a sense of belonging for all.