Two to four days should be enough to weather the worst of a cold, but up to a week may be needed for flu, says infectious disease expert. 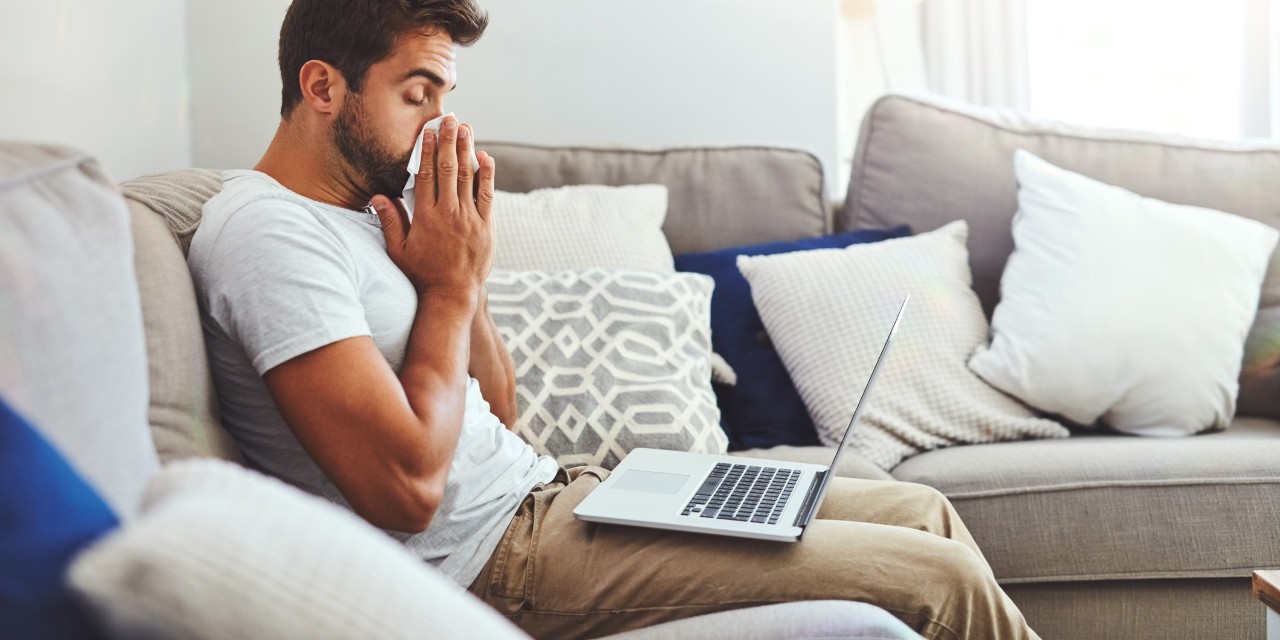 It's smart to stay home from work for two to four days when you have a bad cold, and up to seven days if you have the flu, says a U of A infectious disease expert. (Photo: Getty Images)

It makes sense to stay home when you’re sick with a cold or flu, but when is it OK to go back to work?

That timing poses a dilemma for someone who’s feeling stressed to get back but is still dealing with the sniffly remnants of a stubborn cough or flu and worried about spreading it around, said Lynora Saxinger, a University of Alberta infectious disease specialist.

For most people it’s not really practical to stay away from work for days or weeks until all symptoms are gone, she noted.

What’s smartest is to stay home for the worst of the illness—about two to four days for a severe cold and five to seven days for the flu, Saxinger said.

“When you’re feeling your worst, try not to be out and about; that’s when you are most infectious.”

While people can spread their cold or flu before they start feeling truly ill, they’re most contagious when they start coughing or sneezing, which sprays the viruses into the air for others to breathe in. Though some symptoms can be similar for both, flu usually also comes with a fever, significant cough and severe aches, Saxinger noted.

“You’re overloaded with the virus, and your body is trying to respond to the invasion. Usually after the fever breaks, you’re becoming less contagious.”

It’s commonly recommended to wait at least one or two days after the fever is gone to return to work, she added.

To avoid catching a cold or flu, or spreading the misery, Saxinger urges people to take some simple precautions.

“Basic things can make a big difference, so don’t get fatalistic and assume you have to get sick if cold and flu is going around,” said Saxinger.

And if you’re just getting over a cold, good practices can help prevent catching another one—which is entirely possible.

“You get neutralizing antibodies from your first cold, but often there are many respiratory viruses circulating, so you can get a back-to-back cold from a different virus.”

Not really sure if you’re starting to feel ill?“Use your judgment, but if you start feeling horrible, you should leave work; you’re becoming more infectious as that virus ascends in the body. Toughing it out is not the right thing to do,” said Saxinger.

Don’t spread it around

If you do have to go out while very sick—to a clinic, for instance—wear a mask, available at most drugstores. Covering your mouth and nose helps contain the virus from spreading into everyone else’s air space. If you don’t have a mask, cover your cough or sneeze.

“We know that viruses spread into the air after coughing or sneezing, but they can also settle,” Saxinger noted, adding they can remain infectious for up to several hours on soft and hard surfaces. Viruses in mucous droplets can last up to 48 hours, one study showed. Use a diluted bleach and water solution or a household cleaner to wipe down “high-touch” surfaces like doorknobs, office furniture and computers.

Wash your hands—and keep them away from your face

Proper handwashing after touching surfaces is important to stop the spread of cold and flu, and it’s important to not touch your face, Saxinger said. “The only way for the virus that’s living on that doorknob to get into your system is by your own hands. If you have a habit of rubbing your eyes or nose a lot, be aware of that.”

People who are medically at risk, including those who are immuno-compromised, elderly or chronically ill, may be able to get helpful treatment if they are showing early signs of influenza.

“There are prescription medications that target the flu virus, shorten the duration of symptoms and make complications less likely for some, but only if they’re taken within the first couple of days, so if you are at high risk get assessed right away,” Saxinger said.

The other reason for anyone with the flu to see a doctor is when it persists, she added. “If you’re getting better but then start feeling worse again, you should get checked out for a secondary bacterial infection.”

To help recover, get lots of rest and go for symptom relief

“When your body is waging immunological warfare and you’re fatigued, you don’t want to divert your resources from fighting the infection,” she said. “If your body is telling you to rest, let it rest and stay hydrated by drinking plenty of fluids.”

Cold medicines can also alleviate stuffiness and congestion, though Saxinger advises using medicines with decongestants no longer than three to five days.

“They can elevate the heart rate and cause dry mouth, and can have a rebound effect, where you worsen when you stop.”

They aren’t recommended for young children, she added. Over-the-counter pain relievers like acetaminophen or Ibuprofen can also help substantially with fever and aches.

“I wish we had better treatments for cold viruses, and patients and physicians alike often want to do something, so antibiotics are often prescribed ‘in case’ they might help, but the vast majority of these prescriptions are not useful. Evidence suggests that bacterial complications of viral infections are rare, so only one in 4,000 people with a viral infection would benefit from antibiotics given to prevent a bacterial complication.”