How many nouns are in that garlic? 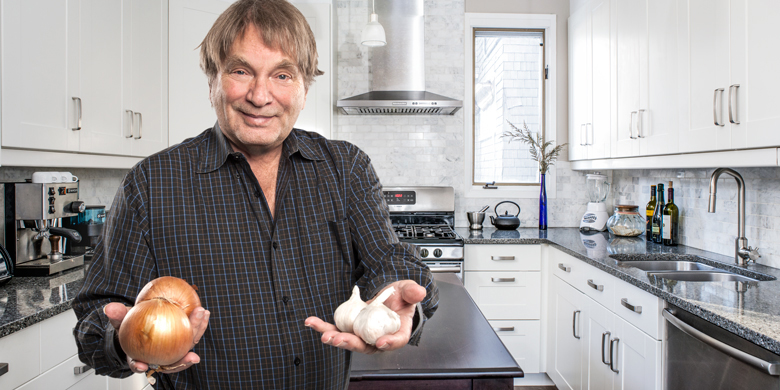 130131-jeffrypelletier-banner
You say onions, I say garlic: Jeffry Pelletier shows how illogical nouns can be when it comes to describing the world. (Photo: Richard Siemens)

(Edmonton) Forty years ago, Jeffry Pelletier, now a University of Alberta philosophy and linguistics researcher, challenged a fundamental tenet of English grammar in his doctoral dissertation. In trying to show that natural languages—such as the one you’re reading—do not directly reflect reality, Pelletier declared that the difference between mass and count nouns was arbitrary and, as such, not very useful in talking about our world.

At the time he made the claim, there was so little literature on the subject that he covered all of it in his dissertation. The anthology he later edited on the subject remained the only such work in the field for many years, he says. But now, what was once an esoteric subject is becoming more common.

“It’s an obscure technical topic; during the ‘70s some people wrote about it and then stopped. But the topic kept bubbling up here and there. And suddenly, about five years ago, there were all of these people in Europe interested in this topic. So somehow it got interesting once again after all these years,” says Pelletier.

An indication of that shift is the €250,000 award Pelletier received from the Alexander von Humboldt Foundation. A German scholar, Tibor Kiss, nominated Pelletier for the Anneliese Maier award, which recognizes lifetime contributions to research in a field and funds research projects that advance the internationalization of disciplines in Germany.

Pelletier’s grammatical claim is part of a much larger issue he has been preoccupied with for decades—making language more logical.

“For 40 years, I’ve been interested in a question on natural languages—the view that natural languages are a bit imprecise, unclear and fuzzy, and that somehow you could sharpen them by representing them in a system of logic,” he says.

“So I picked on a few areas of natural languages to show how to represent them in formal logic. I said in the theses that the mass-count distinction is totally arbitrary. I claimed that every noun could be used as either mass or count. And the moral I drew from this was that existing differences might be important but they don’t say anything about the world.”

He says some people agree that many words and phrases can be considered both mass and count nouns. To complicate things further, he says certain nouns that describe the same kind of reality are treated differently. “Take a word such as onion, which is a count term—one onion, five onions and so on. But garlic is a mass term. In reality, there’s hardly any difference in the world between the two, yet you can count onions but can’t count garlic.”

Although some scholars have said Pelletier’s ideas apply only to the English language, he points out that seeming differences between languages help substantiate his claim. He explains that in German the word bridge is feminine but in Spanish it’s masculine. “But no one thinks of bridges like that, and so I said mass and count nouns distinctions were like that distinction—they don’t mean anything about reality,” he says.

Thanks to the award, Pelletier will team up with Kiss to compare usage of count and mass nouns between German and English. Kiss and his team at Ruhr University Bochum have spent five years tracking how German-language newspapers use the terms. And they will bring that expertise to the U of A, to train students who will work with Pelletier on the five-year interdisciplinary project.

“Kiss was interested in how common it is for mass nouns to be used as count nouns, for all of the nouns in German. We will investigate how count and mass nouns work in English and do comparisons with German,” he says. “This is something that could be useful for translating languages, and perhaps a way to predict more accurately when one language is going to use count and another mass for the same noun.”

How many nouns are in that garlic?
Newsroom