Jared Yeung’s experience aboard a floating clinic in Cambodia revealed a path for the doctor to have a larger impact. 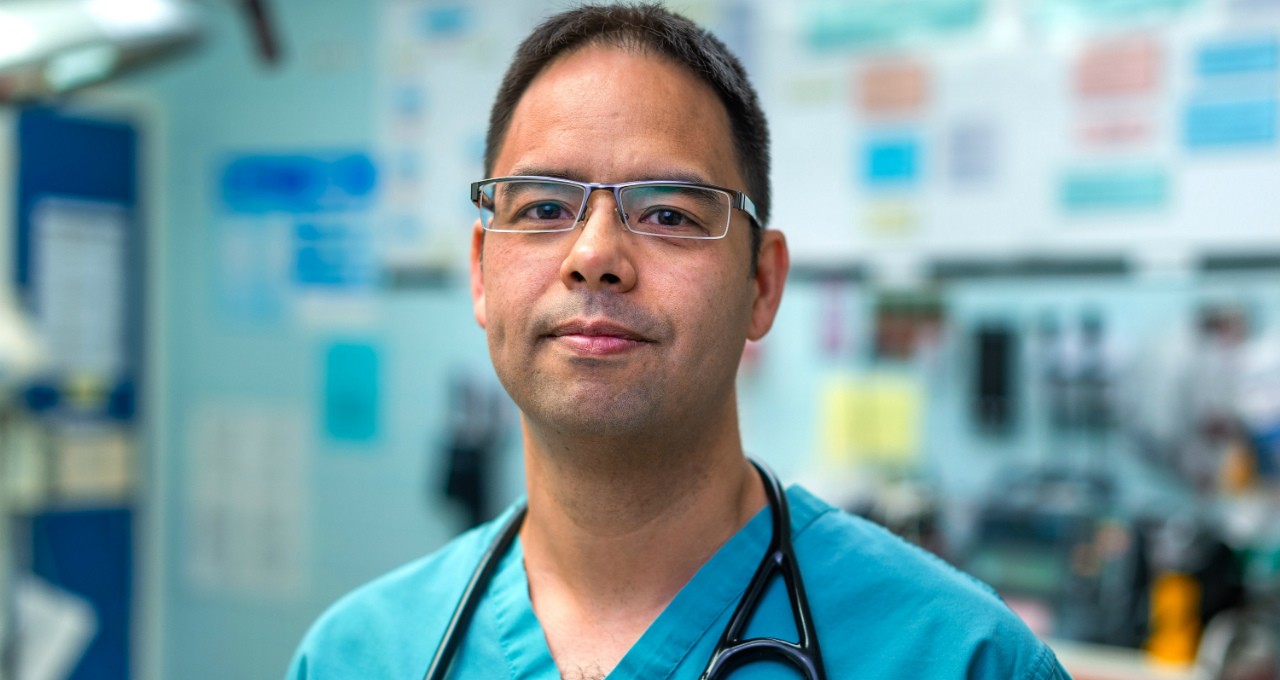 Physician Jared Yeung earned his master's degree in global public health as a way to have the biggest impact in helping people. "Public health can impact tens of thousands, hundreds of thousands, potentially millions of people." (Photo: Richard Siemens)

Jared Yeung was cooped up in a small office in a floating clinic in Cambodia. It wasn’t a particularly unusual place for him to be—for years the 42 year-old physician had divided his time treating patients between rural Alberta and other less-developed parts of the world—but he wasn’t feeling useful at the moment.

His colleagues were administering aid to the extremely marginalized people living in boats in the area, and he realized he was just getting in the way.

“A physician usually goes and spends five nights with the community treating patients,” he explained. “I did it once or twice, but I realized pretty quickly how much of a weight I was. As a western-trained physician who doesn’t speak the language and needs a medical interpreter, it was a ludicrous waste of time and resources. So I found myself looking for the best way to use my public health training to support what the clinic was doing.”

Staring at four walls—albeit floating walls, as the clinic is literally on a lake—Yeung was ultimately face to face with a much bigger mental and emotional choice he had made to shift his career seven years ago and get a master’s in public health from University of Alberta.

Had it been the right thing to do? How could he apply what he’d learned and make a lasting difference in these people’s lives in his three short months without seeing one patient?

Yeung was raised in an impoverished, single-parent household, which shaped his early passion and drive to help others. “We were dependent on welfare, and I knew how tough it can be when you are poor.” When his mom kicked him out in high school, he turned to the army as a means to stay in school and found himself as a trained peacekeeper mechanic in places like the Golan Heights at the tender age of 22.

He explained that he hadn’t turned to the army by accident.

“A commanding officer encouraged me to read a sci-fi novel called Starship Troopers. It’s a psychological and philosophical piece of fiction about why soldiers fight, and I connected it back to my strong sense of civic duty. Canada had supported me and my family. They paid for my braces and allowed me to (pay for) tae kwon do. As a reservist today, I still to this day feel a strong need to give back.”

Yeung took full advantage of educational opportunities the army afforded, and got his BSc at the U of A in 2000, graduated from the University of Calgary’s medicine program in 2003 and completed a family medicine residency at the U of A two years later. He then entered a rural locum medicine stream, which allowed him to provide care locally in rural Alberta as a substitute physician and spend time caring for patients abroad in places like Afghanistan, India and the Philippines.

However, after about five years of this approach to medicine, a peculiar feeling descended upon him.

“I was making myself feel good treating these people in developing countries, showing up with a bag full of drugs and my stethoscope, but my lasting benefit to a population was really quite small. It was a disenfranchising feeling.”

Then, by chance, Yeung ran into Lory Laing, an instructor at the U of A’s School of Public Health. Coffee and conversation helped Yeung re-examine his long-term goals. “She pushed me toward the school. A lot of the issues I was seeing or coming to understand had as their foundational principles public health—and specifically, global public health.”

Bottom line: Yeung wanted to have a much bigger impact.

“Trained as a doctor of biomedicine, I had the skills and knowledge to treat one patient at a time. Unfortunately, there are only so many hours in a day. I could only treat 30 or 60 patients. Public health can impact tens of thousands, hundreds of thousands, potentially millions of people depending on the program and capacity support. It came down to math for me.”

Going back to school was not even remotely intimidating for Yeung. The self-described lifelong learner—who, after being intrigued by the philosophical underpinnings of Zen and the Art of Motorcycle Maintenance, enrolled in a long-distance philosophy degree at the University of Waterloo—loved academics.

In 2012, Yeung enrolled as a open study student in the U of A’s master of public health in global health program, deciding that studying part-time, which worked out to be one course a semester for six years, was the best way to raise a family. (He now has a wife and a five-year-old son.) “Faculty and staff were really supportive, and when I did run into trouble, they really went to bat to ensure I could graduate.”

Over the years, Yeung’s public health education began to have an impact on his day-to-day work. For example, he’d adopted a far more collaborative bent with staff in rural emergency rooms. “Public health education teaches you a lot of skills, like how to do an environmental assessment, but more importantly it causes you to re-examine yourself as a person, such as what constitutes true leadership and how one’s own biases play into the medicine provided.”

When it came time to choose his practicum, Yeung opted for Cambodia’s Lake Clinic because he admired the leadership qualities of its founder, physician Jon Morgan.

After arriving in the country, Yeung certainly saw things with newly focused eyes.

“One of the craziest things I observed was how easily well-intended aid leads to paternalism. It’s a strange power dynamic that you don’t see until you are working in the system,” he added. “After the Khmer Rouge and Cambodian genocide, money poured in. The system grew corrupt from the top to ground level, where even physicians were asking for bribes when they were supposed to provide free care.”

Sitting in that office on Tonlé Sap Lake, processing his experiences, Yeung mulled over how he would put his newfound education to best use … in just a few months’ time.

“It came down to asking, ‘What is the biggest problem here?’” said Yeung. For any non-governmental organization, it’s resources, he added. “For The Lake Clinic specifically, it was financial resources. Jon had created such a successful organization that some funding bodies had decided to pull out. While I was there, Jon learned he was losing 25 per cent of his funding for the next year.”

Yeung opened up the proverbial books and dug deeper. He noticed how one funding suitor criticized the clinic for not having program evaluation—a tool funders use to justify donations. “The last one had been done at inception 10 years ago. I told Jon, ‘I can do this. I can give you a program evaluation.’”

Not only did Yeung embark on the massive undertaking, which includes among many things systematically collecting data, analyzing it and presenting it under clear performance indicators, he helped implement it—which is tantamount to a field practicum.

Yeung is hoping his contribution will put The Lake Clinic in good stead for many years to come, especially as bigger funding bodies increasingly demand transparency and accountability with donor money. It’s already helped secure finances for a dedicated fundraising manager for the clinic. “I also gave them the tools and skills to repeat the process down the road when the time comes again.”

So did he have any regrets spending most of his time at a desk, working on a project that would have much less important but potentially larger health impact?

No, said Yeung, adding that his contribution now feels more authentic to who he is and what he wants to contribute to the world as he continues to provide medicine abroad, especially once his son is a little older.

“When I do global health work now, I am in a position to help create broader, empowering health outcomes, while so many others continue the very important healing work on the ground.”