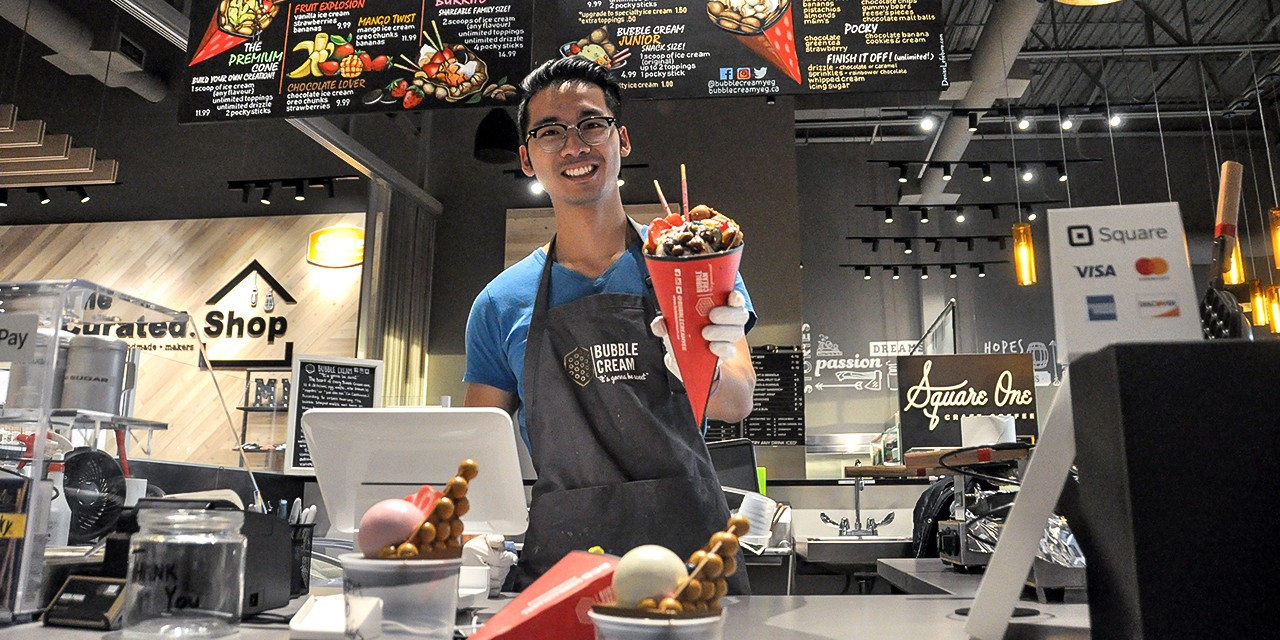 Bubble Cream co-founder Steven Chen serves up one of his company's tasty bubble waffle treats. Along with two partners, Chen has managed to grow the business part-time while studying mechanical engineering at the U of A. (Photo: Michel Proulx)

When university students pine for the perfect weekend job, it likely includes pretty decent money—it is a fantasy, after all—and maybe a forgiving boss in case of late-night, ahem, studying on Fridays and Saturdays. But being your own boss, too? That, many would say, is too much to hope for.

“We’re all Asian, and knew of this street food that’s been really popular in Hong Kong since the 1950s called ‘bubble waffles,’” said Chen, adding they’re egg-based and served plain and hot. “When Vincent said, ‘Let’s buy a machine from China and try to make our own and sell them to Edmontonians,’ we were excited.”

Market research showed there’s a hunger for street food, and bubble waffles, which had been popping up in some major American cities, were not entirely new to North America, said Chen.

“It also helps that Canada’s multicultural population has some adventurous palettes,” he added.

Considering the founders had no cooking or retail experience—and super-busy schedules—this whimsical part-time business enterprise could have gone bust at any moment.

Instead, with a little gumption, engineering know-how and elbow grease, Bubble Cream is so in-demand, it gets requests for appearances by the city’s premium festivals including the Fringe, Taste of Edmonton and K-Days.

Here’s how it happened.

After experimenting on the recipe at home, the three partners finally developed the right flavours and texture for their signature bubble waffle, which they decided would feature ice cream and a wide range of fruit and candy toppings, along with sweet drizzles that customers could tailor to their liking.

Craig Patterson, director of the U of A’s School of Retailing and owner of Retail Insider magazine, said novel ice cream offerings are on the rise.

Eager to test out Bubble Cream on Edmontonians, the partners looked for the right event, said Chen. That turned out to be a night market at the Alberta Aviation Museum in April 2017.

They signed up, formally initiated their business partnership, started building the brand—including taking a lot of pictures of their unique dessert—and developed a strong social media profile, with a powerful Instagram showing.

He added the success of that night truly came down to their Instagram account and social media following generating direct sales.

Patterson said if you’ve got a product that looks (and tastes) good, Instagram can be a powerful direct-sale tool.

“You can get single sales just by posting images and news about an event. Human nature is quite visual.”

Taste of Edmonton caught wind of Bubble Cream’s success and invited it to partake in its August 2017 Taste of New area, designated for new food concepts.

“We developed a new product concept, our Bubble Cream Juniors, which were the right size for the festival, and again, we sold over 200 a day,” said Chen, adding he and his partners make a point of working every event.

He also believes their engineering skills played a major role in making the startup thrive.

“We used engineering principles to work through everything,” he explained. “Whether that was controlling and manipulating variables, such as flour or tapioca starch, or project management, analyzing cost, improving efficiencies, and booking trucks and hauling trailers. We’re not experienced chefs but we are engineers and we can figure things out.”

In the fall of 2017, they appeared at the St. Albert Farmers’ Market five times, and between their own co-op savings and the sales they’d made, the three decided to invest in a food trailer.

“Our business model was always to be mobile and pop-up,” explained Chen—though they do currently rent a semi-permanent kiosk at Edmonton’s new Premium Outlet Mall at the International Airport.

“It’s been hugely successful for us. We sold 400 every day on the weekend of the opening month, but we prefer the concept of a pop-up store and like to sell Bubble Creams around the city.”

That freedom to choose when to work is vital to Bubble Cream’s success because, as Chen pointed out, he is still a full-time student with a co-op work term, and his two partners are now full-time engineers.

“This was always something we wanted to do on weekends. It’s not something that we want to be worried about every minute, getting sales and monthly inventory. Working weekends, when we can devote ourselves to it fully, is where we get the most satisfaction,” he explained.

“They allow entrepreneurs to come out with new concepts without the commitment of a permanent retail space.”

That said, Patterson added that to have longevity, food trailer models need to keep their offering fresh. “Customers want newness and especially in the age of Instagram, it’s important to keep innovating.”

Chen said the partners are doing just that, hoping to eventually add a delicious filling to the pockets of the waffles. “We’re also offering such a wide variety of toppings, from gummy bears to pistachios.”

For now, Chen is focused on graduating, and because Bubble Cream is not a full-time business, he has time to sort out what he’d like to do with it down the road.

“Looking forward into 2019 and 2020, we may well expand beyond food trucks to more steady locations. That’s the beauty of our business. It’s truly flexible and that suits our needs perfectly.”