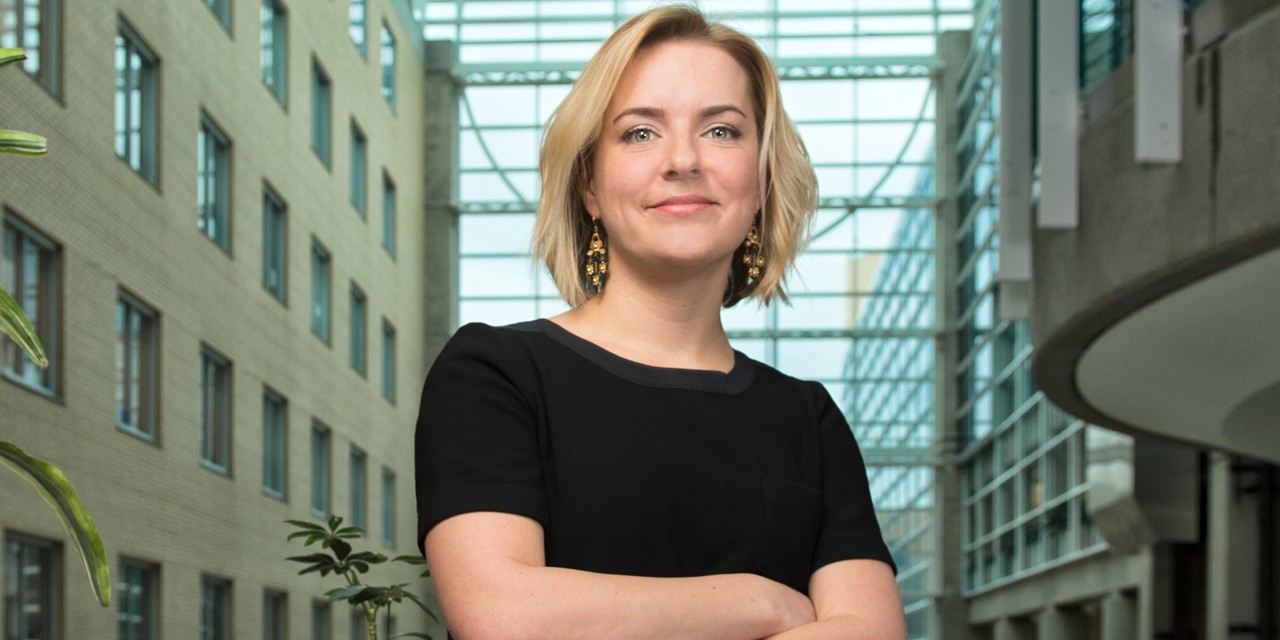 Elaine Hyshka was awarded a 2017 UAlberta Community Connections Award for her fact-base advocacy of harm reduction programs and the frank discussions she is leading about eliminating the stigma and discrimination surrounding people who use substances.

No one single story about how people become addicted to substances is the same. Similarly, every Edmontonian whom Elaine Hyshka interviews for her ongoing research on substance use holds onto uniquely individual hopes and dreams—even in the face of repeated stigma and discrimination.

“Imagine having a potentially life threatening health condition but the doctor tells you to take your concern elsewhere. That’s often the experience of people with substance use disorders due to a lack of training, resources and ongoing stigma,” she explained. “It’s hard to hear stories of bad things happening to good people. And it’s really frustrating knowing that in other places there are solutions that improve the health of people with substance use problems, but that we haven't implemented those solutions here.”

Needless suffering is what drives Hyshka to make a difference in the lives of people with substances users problems in the one place she believes she can—policy change.

“I couldn’t watch people with medical problems, who could benefit from significant cost-effective interventions, not get help because of stigma and judgment,” she said. “I have amazing respect for my colleagues who work on the front lines. But I don’t have the strength to hear challenging stories every single day and not lose my optimism. Instead, I focus on research, look at data, and support efforts to achieve evidence-based policy change.”

And she’s proven very effective at it. The 32-year-old assistant professor at U of A’s School of Public Health has managed to spur massive change, the likes of which landed her recognition as the recipient of the UAlberta 2017 Community Scholar Award, one of three Community Connections Awards (CCA) handed out annually to members of the university fold for their work in the community.

Her research and advocacy work for harm reduction programs helped lead to Alberta Health’s recent announcement of $236,000 in funding for four supervised injection sites where users will be better protected. What’s particularly exciting is an additional $500,000 was designated for up to six other Alberta communities to conduct needs assessments for services, including survey research modelled on her own work.

“That was huge. It was the culmination of five years of work,” she said.

“It’s unusual for the CCA to be awarded to someone so new to the academy,” said Kue Young, dean of the School of Public Health. “In the short time since her appointment, Dr. Hyshka has not only established herself as an emerging researcher with a national profile, but her research has made a deep impact on the local community in Edmonton. She works with city council on the one hand, and community groups on the other, to improve the health of one of the most vulnerable populations in the city.”

Despite the recent achievement, Hyshka and her community, academic and government partners aren’t celebrating.

There’s too much left to do.

From theoretical understanding to action

“Community participation in research does not happen overnight,” said Young. “Hyshka’s commitment to the people of Edmonton’s inner city goes back to her student days in the School of Public Health.”

In fact, Hyshka first learned there was a solution to the substance use problem plaguing Canadians—especially Albertans—in the third year of her sociology undergrad.

“It was pretty clear from the academic side of things that our current approach of criminalizing and stigmatizing people using drugs was not working very well. Maybe it was naive of me at the time, but I couldn’t believe we knew what we were doing wasn’t working but that we weren’t changing what we were doing,” she said.

“Elaine asked me about pursuing a PhD in public health, specializing in addictions,” recalled Cam Wild, professor in the School of Public Health. “When I asked her why, she said that while she loved her social science training, she wanted to go beyond theoretical understanding to action, influencing policy and making a real difference in people's lives. When a trusted colleague told me that she was among the best graduate students she ever had, I told Hyshka that she had found the right place for her interests.”

While working on that PhD in 2012, Hyshka got just the opportunity she needed: she was asked to joined the Access to Medically Supervised Injection Services in Edmonton (AMSISE), a collaboration of 25 local organizations, from healthcare and social services to government. In 2014, she was named lead researcher for primary data collection for the Edmonton Drug Use and Health Survey.

“Over the past five years, Elaine has generously contributed countless hours and her own research funds, and secured $40,000 in additional funding from Alberta Health and the City of Edmonton, to design, coordinate and take a hands-on role conducting 320 interviews with people who use substances in the inner city,” said Shelley Williams, AMSISE chair and executive director of HIV Edmonton.

Hyshka says the one-on-one conversations she had with survey participants ended up being the best learning of her whole PhD. “It’s easy to read academic articles about people who use drugs but the best way to understand substance use is by talking to them about the impacts on their lives.”

Hyshka’s survey results were ultimately what informed and provided evidence for the decision to move forward with supervised injection sites. Not satisfied in just sitting back, Williams says Hyshka effectively communicated her research results and advocated for implementing them to better help substance users.

“Elaine has been a credible, calm and articulate spokesperson for AMSISE through more than 40 media interviews since March 2016 and during the dozen or so meetings when we had the opportunity to advocate for changes with senior policy makers,” said Williams.

Speaking with media is outside the comfort zone of what academics are trained in, admitted Hyshka. “But it’s critical that our voice is in the debate. A lot of people want to hear hard numerical data from credible sources.”

That’s certainly true for the public, some of whom are skeptical of the proven benefits of supervised injection sites.

“It’s not the easiest work to do,” said Hyshka. “Supervised injection services are sometimes misunderstood by some members of the public. They get very nervous about something they haven’t heard about before. But it’s necessary to balance the needs of the population with people who are experiencing mortality from opioids. These supervised sites are an important part of the solution, and can improve health and safety for people who use drugs, their families and communities.”

The supervised injection sites are in fact only one aspect of Hyshka’s work, for which she was also awarded Avenue Magazine’s Top 40 Under 40 Award. She’s also been integral in researching new models of effective care for people with substance use problems as the scientific director of Royal Alexandra Hospital’s Inner City Health and Wellness Program, which was also awarded Alberta Health Services’ President’s Excellence Award for Outstanding Achievements in Innovation this year.

“I’ve landed my dream job,” said Hyshka of her work at Royal Alexandra Hospital. She also just celebrated another milestone, winning a Canadian Institutes of Health Research Catalyst Grant to explore the ethics of inpatient syringe exchange in a large acute care hospital.

What’s next? Hyshka says she won’t be satisfied until she’s eliminated the stigma and discrimination that surrounds people who use substances. This means Albertans should be able to have open conversations with any primary care doctor about any drug problem they have and get the help they need.

“Patients should not be told to come back next week or be put on long waiting lists. We don’t tolerate that when it comes to other life-threatening conditions, but it happens all the time in the addiction and mental health world. We need to reorient services so they are patient-centered.”