How quick action and a defibrillator saved Jay Bouwmeester’s life

Frightening and mysterious heart attacks in athletes are rare but often fatal unless medical care happens immediately, says U of A expert. 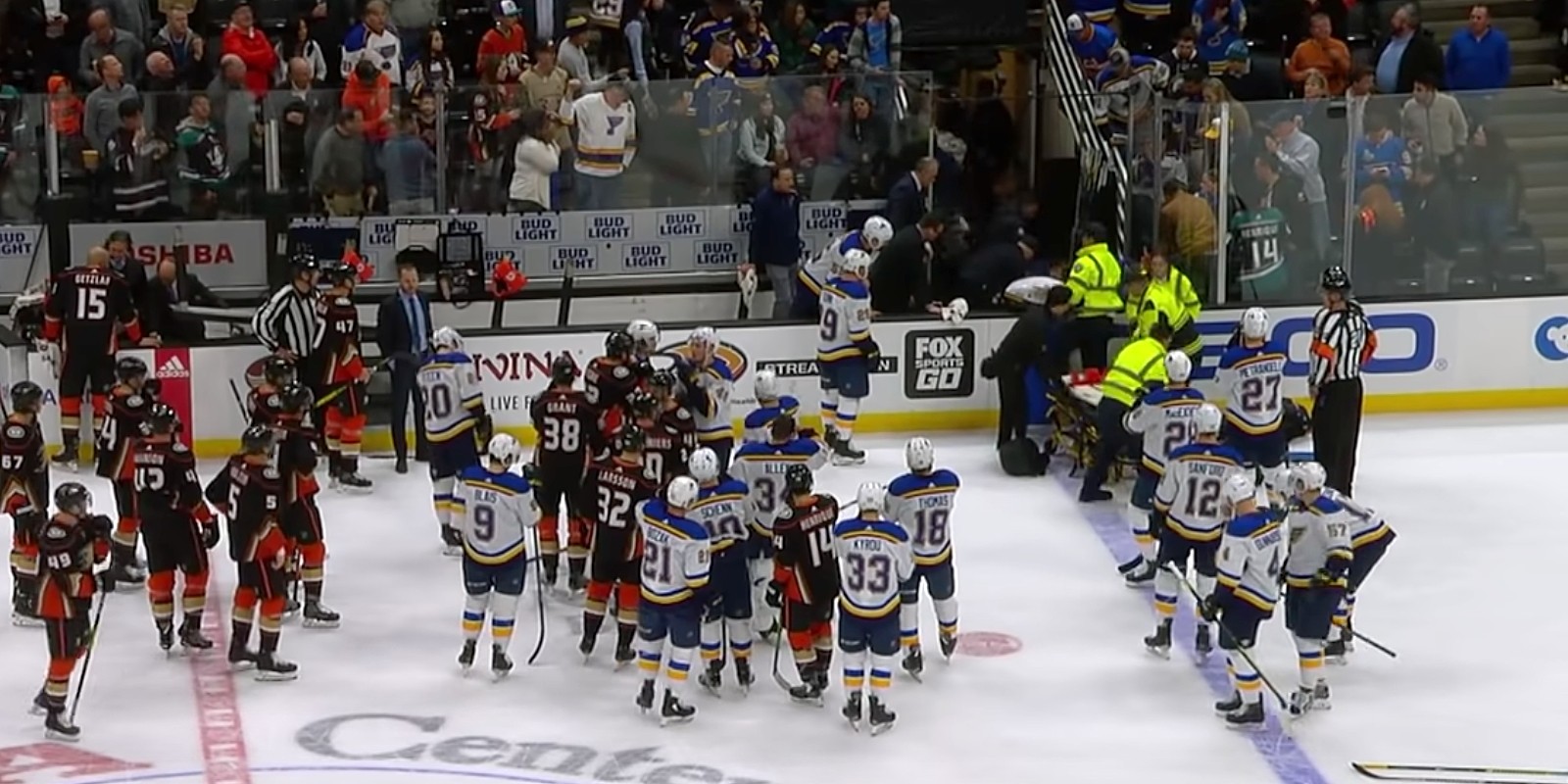 The immediate medical attention St. Louis Blues defenceman Jay Bouwmeester received after collapsing on the bench during a game Feb. 11 likely saved his life, according to a U of A expert in sports medicine. (Image: Sportsnet via YouTube)

When St. Louis Blues defenceman Jay Bouwmeester collapsed on the bench after his first shift against the Anaheim Ducks Feb. 11, emergency preparedness probably saved his life, according to a University of Alberta sports medicine expert.

“The few NHL players that needed an AED (automated external defibrillator), that we are aware of, recovered because of immediate medical response,” said Terry DeFreitas, a U of A sports medicine professor.

Bouwmeester, who was subsequently fitted with an implantable cardioverter defibrillator and recently announced that he will not play again this season, was the latest in a short list of elite athletes who suffered from sudden cardiac arrest, which in most cases is known better as sudden cardiac death (SCD).

DeFreitas explained SCD is the result of an electrical abnormality that causes an irregular or accelerated heartbeat—often over 300 beats per minute—known as ventricular fibrillation or ventricular tachycardia.

“The rapid or irregular heartbeat doesn’t allow for blood to get into the chamber and pumped out to the body, so the person collapses,” she said.

Unlike TV depictions showing emergency room doctors using a defibrillator to restart stopped hearts, DeFreitas said defibrillators are used to put an electrical shock through the heart to reset it to its normal rhythm.

“The odds of saving a person’s life go way up if the heart in cardiac arrest is defibrillated within three minutes,” she added.

If there is a silver lining, this often-fatal condition is exceedingly rare. A retrospective study published in the New England Journal of Medicine found the risk of death during competitive sport in a sample of athletes between the ages of 12 and 45 over five years was 0.76 cases per 100,000 athlete years.

However, what is particularly distressing about these episodes is that the affected athletes are young and typically in peak physical shape.

“They don't normally have cardiovascular disease, sclerosis or the clogging up of veins and arteries that someone who is sedentary and older might have,” said DeFreitas, who is also a physician at the Glen Sather Clinic.

“There's tons of possible causes for it, but it's really quite a debate as to how physicians can go about trying to detect and predict it.”

There are, however, certain conditions that predispose people to sudden cardiac death, including hypertrophic cardiomyopathy—thickening of the heart wall that prevents blood from entering the heart chamber—along with congenital heart defects and other syndromes that produce irregular heartbeats. Another, arrhythmogenic right ventricular cardiomyopathy—a sudden arrhythmia in the heart—is very common in Italian soccer players, which DeFreitas said seems to have a genetic component.

However, one U.S. study reported that 44 per cent of autopsies on athletes killed by suspected SCD revealed that the heart was completely normal.

“The unfortunate thing about sudden cardiac death is an attack is often the first symptom of the problem,” she said.

“A 60-year-old with coronary artery disease might get chest pain or something like that. In this situation, almost 80 per cent of athletes showed no warning.”

DeFreitas said physicians speculate that there might be a relationship between SCD and a pre-existing illness, such as a very bad flu. In autopsies that uncovered a cause of sudden death, she said sometimes medications or illicit drugs such as cocaine or steroids were found.

“But that's the exception, not the rule.”

While trying to predict who might be more susceptible to SCD is more art than science at this point, DeFreitas said the bigger picture is that SCD, while still exceedingly rare, is deadlier and more likely in more sedentary populations enjoying sport recreationally.

“The most important thing out of all of this is preparedness,” said DeFreitas, who continually walks her medical team through the emergency procedures before every event she’s asked to work.

“An AED is actually pretty easy to use—it tells you what to do, it has diagrams and even talks to you,” she said.

In fact, the hardest part might be locating the venue’s defibrillator.

“You have three minutes, so you don't want to have to be calling somebody to unlock it.”

In an emergency, while someone is retrieving the defibrillator, 911 should be called and CPR should begin, DeFreitas said.

“The compressions are particularly important because you're actually forcing some of the blood to go to the brain.”

How quick action and a defibrillator saved Jay Bouwmeester’s life