Vaughn Marillier belonged to two threatened minorities in his native Zimbabwe. In Canada, he found an inclusive home where he could pursue his passion for sport and nutrition. 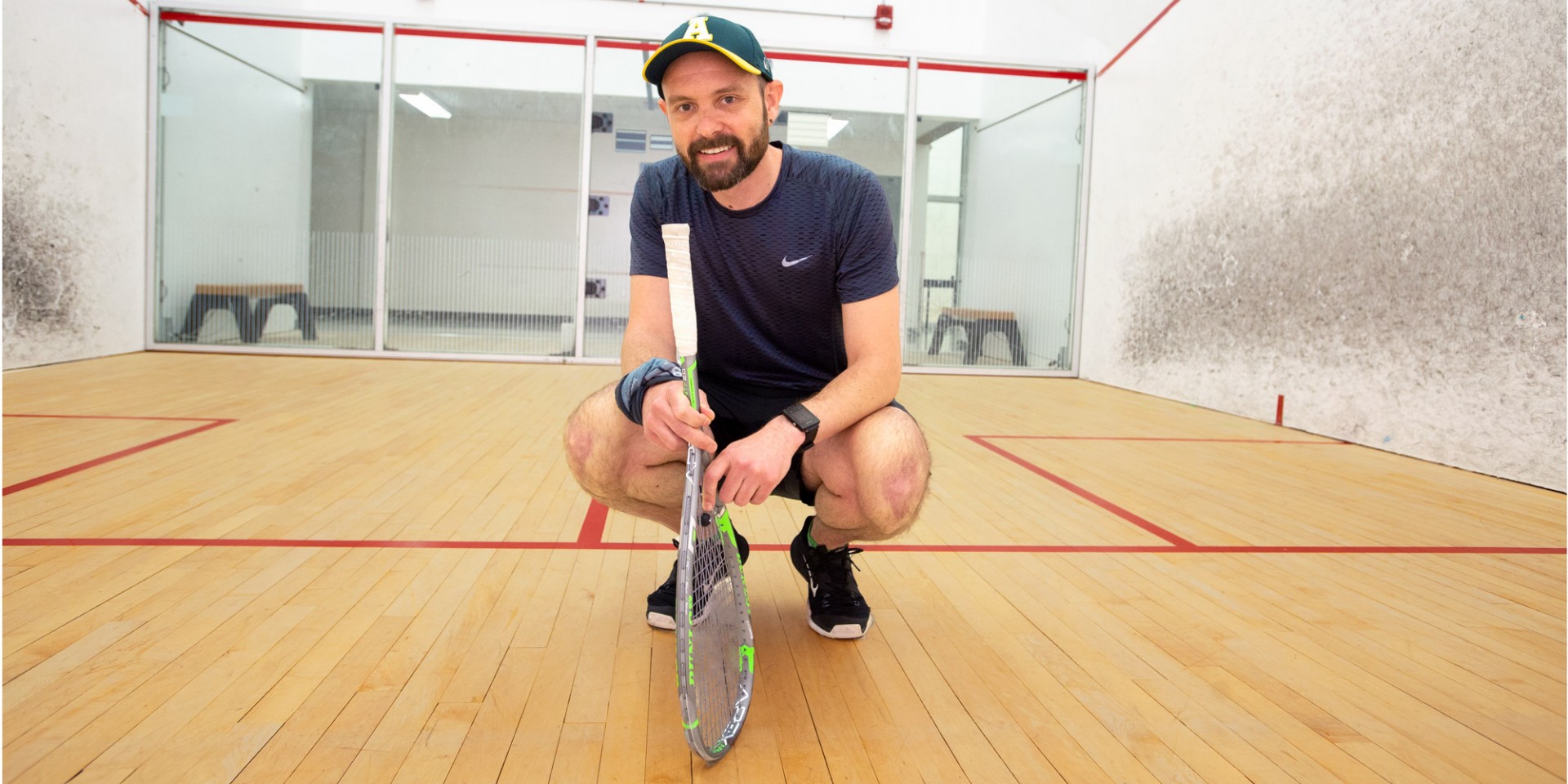 Vaughn Marillier stays active with weekly squash matches at the U of A's PAW Centre. The kinesiology graduate discovered his passion for fitness and nutrition after coming to Canada from Zimbabwe. (Photo: Richard Siemens)

Redistribution of predominantly white-owned farmland was ratcheted up by a pro-Mugabe group that began marching on farms as part of a movement called the Fast-Track Land Reform Program. By the mid-2000s, farmers refusing to leave were being murdered.

In 2006, archaic laws forbidding sodomy were bolstered with legislation that criminalized any actions perceived as homosexual.

“Economically Zimbabwe wasn’t great, politically it was worse,”said Vaughn Marillier, who came from a community of predominantly white farmers and was gay. “Being in two minority groups that were being targeted at the time was a serious threat to my security.”

With the rule of law crumbling, Marillier made a life-saving decision in 2007.

“Luckily for me, I had access to resources that allowed me to leave and I had family here in Alberta,” he said Marillier, referring to an aunt and uncle living in Grande Prairie. “And I guess I have a Canadian winter to thank for my journey to the U of A.”

Marillier stepped off the plane in Edmonton into the dead of winter in 2007.

“I remember driving to Jasper—it was the most beautiful thing I had ever seen, but I honestly thought I was going to die,” he said of his first taste of blistering cold. “Of course, I’d seen photographs of it, and you can see why people romanticize the mountains in movies, but up when it’s 40 below with a wind chill of -50 C, it can be really unpleasant.”

It was so unpleasant that while Marillier was waiting for his refugee application to process, he slid into a bit of a health rut.

“I was unable to work, and having never experienced snow and sub-zero temperatures, going outside was pretty daunting. I became pretty sedentary, and continued to smoke cigarettes and eat junk food.”

2008 went by and his unhealthy behavior continued on unchecked. Then, admittedly bored of “just sitting and doing nothing all day and being terrified of going outside,” Marillier made a change.

“That’s when I found solace on the treadmill in our condo gym.”

After living a pretty unhealthy life for many years, Marillier said physical activity suddenly made him feel better. Walking, then running on the treadmill were ritualized into his daily routine. The results snowballed as he started paying attention to nutrition and eliminated bad habits.

In 2009, he was cleared to go work, which he did as both a graphic designer at the Grande Prairie Daily Herald-Tribune newspaper and working at the local golf course. It was at the golf course where he fell into a fitness crowd.

“That is where I met Jodi, my running buddy, who introduced me to recreational running and a group of runners.”

The like-minded group set some mild goals. In 2010, Marillier dipped his toe in the marathon waters by competing in an eight-kilometre event. He finished second in his age group.

“This is where I realized that I didn't actually suck at running and giving up bad habits was paying off,” he said.

Next up was a half-marathon in October 2010.

“At that point, someone gave me the crazy idea of trying to qualify for the Boston Marathon,” he said. “It was a goal completely beyond my reach—anyone who would have known me would have laughed.”

But there he was, 10 months later, standing at the start line of his first marathon. Three tries and three years later, Marillier, at the age of 35, ran a time of just over three hours at a race in Edmonton to qualify for the Boston Marathon.

And not just any Boston Marathon. The 2014 event represented the first anniversary after terrorists detonated two pressure-cooker bombs near the race’s finish line that killed three people and wounded more than 260.

“Boston was alive, people were lined up at least three or four deep on both sides of the entire race,” he said of the course that sees 35,700 runners from 96 countries wind through the streets of Boston. “It was the first time I ever felt like a rock star. People came up to me and thanked me for coming—you could see people from Boston are just so invested in that race. It was very emotional.”

In the midst of pursuing that goal, Marillier had decided to go back to school.

In December of 2011, worldwide upheaval in the print media landscape had reached Grande Prairie, and a round of restructuring at the paper left the fledgling marathoner unemployed.

With no post-secondary education and no job prospects, Marillier began attending classes at Grande Prairie Regional College in January 2012. He joined the varsity Wolves track team and registered for a heavy diet of science courses. He even found a job providing social media and marketing assistance for Wolves Athletics.

But something was off.

“Working, running varsity, training for Boston and a heavy science course load was tough, and many times I thought about pulling the plug,” he said. “Thanks to the guidance of Matt Bain, my nutrition instructor and mental performance counsellor, I stayed in school.

“I started to think that if I could make positive changes to my health and achieve unattainable goals, then I wanted to help other people achieve those, so I set out to become a dietitian.”

In 2014, Marillier transferred to the U of A’s Faculty of Kinesiology, Sport, and Recreation. As a mature student, he lived the adage, “It’s never too late to learn.”

“Just getting to Canada has been the single luckiest thing of my life. I was able to go the university and pursue an education, which I have come to realize is a luxury for a lot of people.”

Marillier still runs, although he has rounded out his fitness regime to include weekly games of squash in the winter and slo-pitch in the summer.

As for what’s next, Marillier said his goals shifted so many times throughout his time at the U of A, the newly minted kinesiology graduate is taking time to ponder his options. He still has the job with Wolves Athletics and will do that until he can find the right venue to deploy his skills.

“I like the idea of exploring research into sports performance—especially the nutrition side of things—but we’ll see. The fact that I don’t know what I want to do next is a testament to passionate instructors.

“I have gained so much knowledge in many areas, but my passion still lies with nutrition.”